General Lee’s failed attempt against the British rear guard, gave Cornwallis, he believed, the opportunity to defeat Washington’s army and ordered his command to press the attack in the stifling summer heat.
As the Continentals fell back, Washington consolidated his troops in a new line on the heights of Perrine Farm Ridge. Exhausted by the day’s fighting, and now faced by the artillery in the new Continental position, the British soldiers faltered and the pursuit collapsed. Cornwallis brought forward his artillery to counter the Continental batteries and as the artillery duel went on for hours, the British tried to flank the Continental left, but were forced back. Washington then ordered Green’s artillery to Combs hill, which began to rake the British behind the hedgerow forcing them to retire. Washington then went on the offensive and after heavy fighting, the British pulled back. Washington was ready to continue the battle the next day, but Cornwallis resumed the march to New York City during the night.
The stage is set. The battle lines are drawn and you are in command. The rest is history? 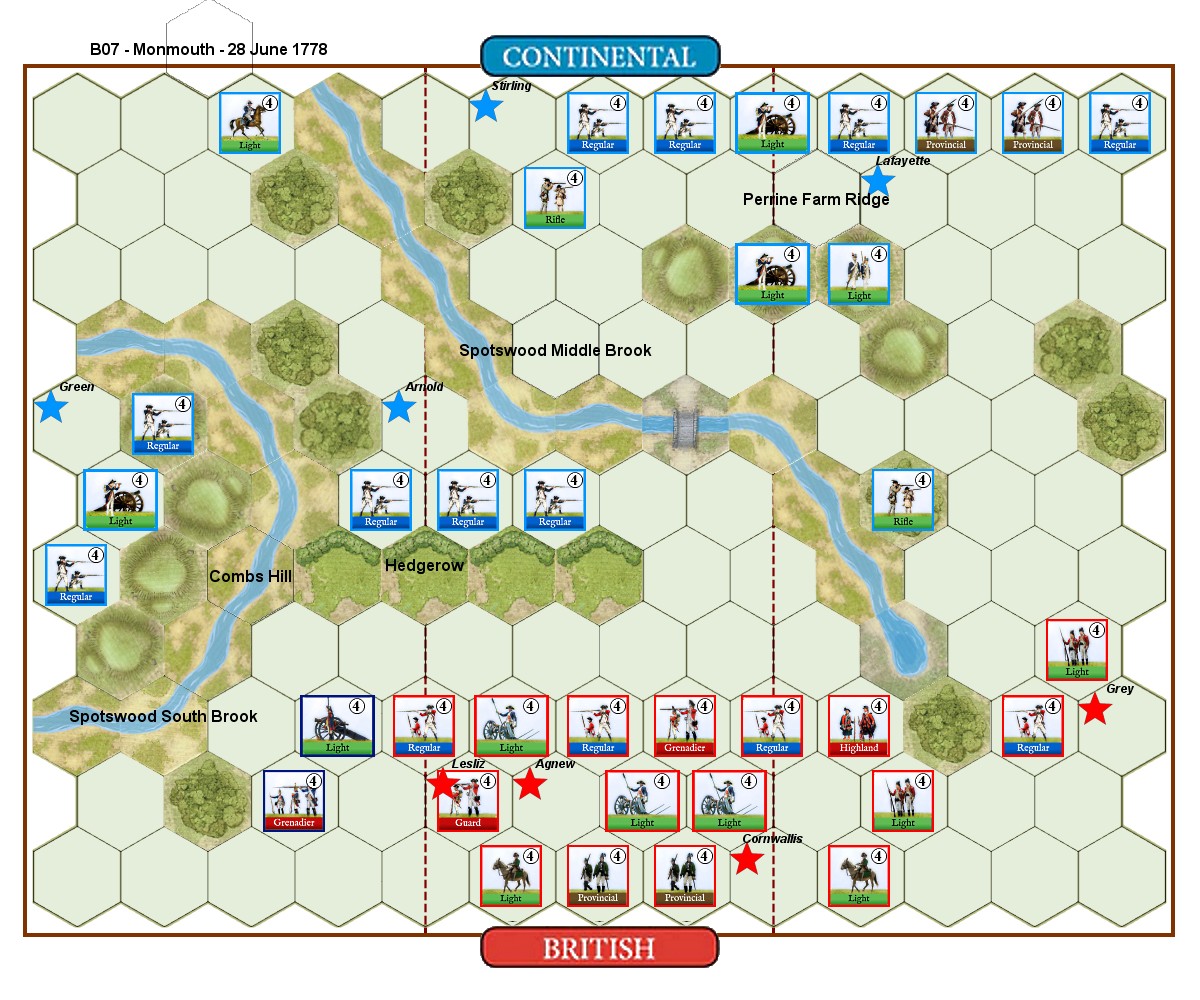 • Opening Cannonade rules are in effect.
• The British player gains 2 Temporary Victory Banners at the start of his turn for each hill hex of Perrine Farm Ridge occupied by a British unit. Place two British Victory Banners on the hex at the start of the turn when occupied.
• Molly Pitcher rule is in effect. One time during the battle, when a Continental artillery unit on Perrine Farm Ridge with one or more lost blocks is ordered, add one block to the unit.
• The hedge terrain hexes are treated as a wooden fence.
• All streams are fordable.

FAQ: In Monmouth, the hedge terrain hexes are treated as a wood fence, correct?
A: THE HEDGE IN MONMOUTH IS TREATED AS A WOOD FENCE. (RB)

Lastall replied the topic: #535 1 year 3 months ago
This was an interesting one. The Continentals won pretty easily but it was a bit of a long battle. In short, the Continentals stayed behind the water and on the hills as much as possible. Once they were there, it was almost like a fortress. Running two cannons on top of Perrine Farm Ridge helped as well. After establishing position on the map, the Continentals just used some reform cards to keep the numbers up. Will be playing again soon but as the British.
kduke42 replied the topic: #489 1 year 5 months ago
Downloadable, please!

NightOwl3 replied the topic: #374 1 year 9 months ago
We house ruled this so that there are two ARTS. with Green on the British left flank, and that the rive is NOT fordable. But even with this change the British were able to make a big push up to the hills. The British did take some hits on their left flank, but were able to move fast enough to engage with the Rebels before they could mount a strong defense. The British will 10-6, but four victory points were for the taking two hills.

Mark McG replied the topic: #61 4 years 4 months ago
(RB) THE HEDGE IN MONMOUTH IS TREATED AS A WOOD FENCE.
Read More...