When Cumberland’s line of battle marched forward on the 16th, Charles army was not nearly ready and far weaker than it should have been. The Jacobite guns opened the battle, but were no match for the Government artillery. Charles had refused to order any Jacobite units to occupy the Culchunaig enclosure, which allowed Bland to maneuver his force around the Jacobite right flank. Murray quickly attempted to bring forward units and consolidate his line to face the Government units that had made the flanking movement. Bland, although in position to attack perhaps because of
the stream that needed to be crossed, or knowledge that the Jacobite charge had already failed and were already in retreat, hesitated. 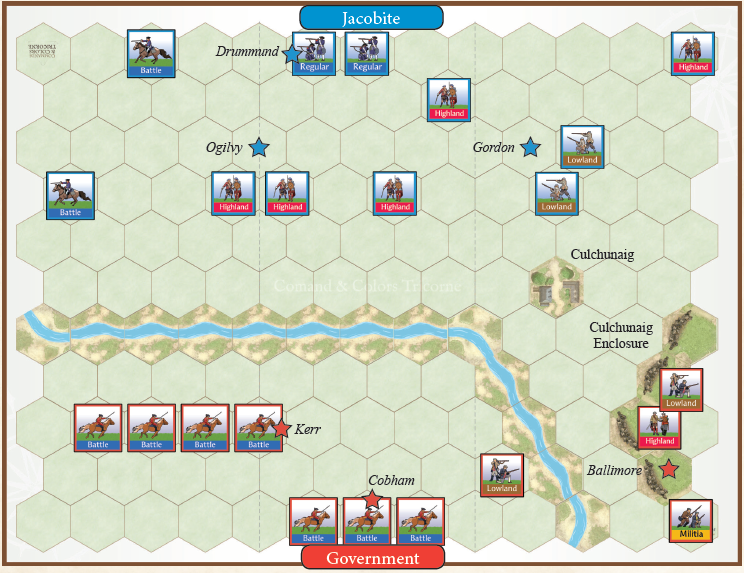 * To determine which side moves first each side rolls 5 dice. Most sabers rolled moves first. Tied, Government moves first.
• Both players can gain 1 Temporary Victory Banner for occupying the Culchunaig building at the start of its turn.
• The Government player gains 1 Permanent Victory Banner the start of each of his turns when at least one Government unit occupies a hex across the stream in the left and/or center section. In this case, the hexes with a dotted line are considered center hexes. A maximum of 2 Permanent banners can be gained on each turn.
• The stream is fordable.