Posted in Jacobite Rising of 1715

In 1714 George I was proclaimed King of Great Britain and Ireland, John Erskine Earl of Mar, began to raise a Jacobite army in an attempt to return James Francis Edward Stuart, the Old Pretender, to the throne. In response, a combined government force of Scottish and English regiments, commanded by the Duke of Argyll, was dispatched to confront the rebels. The two armies finally met at Sheriffmuir, a remote elevated plateau of heathland on the north fringe of the Ochil Hills. Although the Highland forces greatly outnumbered those of the government, Mar was not an experienced military commander. In contrast, the government army was comprised of trained regular troops led by a seasoned commander. During the battle, the right wings of both armies defeated the left wing of the opposition, but the commanders were ignorant of this due to the nature of the ground. When night fell and the fight was over neither side actually knew which side had won and both sides claimed victory. 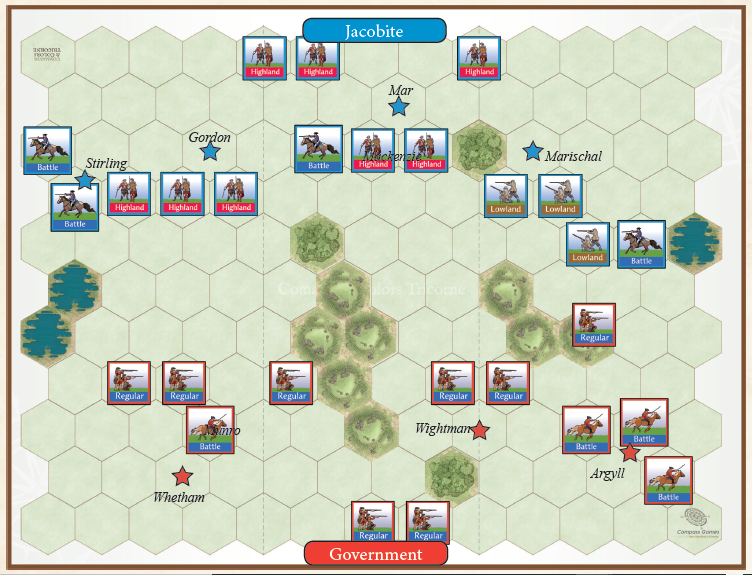 • Clearing a section rules are in effect for both players.
A Victory Banner for this objective is permanently gained when there are no enemy units in a section of the battlefield at the start of a player’s turn. In addition, at the start of each of your turns as long as there are no enemy units in the section, you will gain 1 additional permanent Victory Banner. Note - the hexes with a dotted line are considered center hexes.