Posted in Jacobite Rising of 1715

In early October 1715 Sir Robert Munro, still loyal to the Government of George I, was secretly assembling his clansmen with the intention of taking Inverness. To join him in his effort he appealed to John Gordon, Earl of Sutherland and Lord Reay. William Mackenzie, 5th Earl of Seaforth, hearing of Munro’s plans proceeded to Inverness with his Jacobite Highlanders. While Mackenzie settled in at Inverness, Munro and Gordon gathered 1800 men at Alness and formed a line of battle, Mackays and Rosses on the right, Gordon in the centre and Munro on the left. The Rosses, it seemed, were only armed with wooden poles. Mackenzie, determined to disperse Gordon’s camp, marched with 3000 men from Inverness. As Mackenzie approached, Gordon and Mackay decided due to the enemy’s superior numbers it would not be wise to fight, Munro protested. According to one account, Gordon and Mackay shortly after council, retreated across Bonar Bridge leaving the rest to make their own way. Munro did not desert his men and after making a brief stand marched back to Foulis Castle. 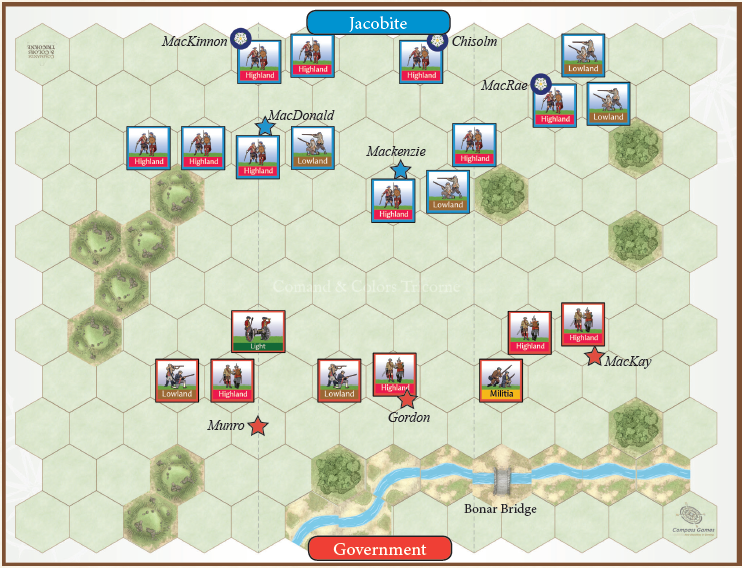 • Opening Cannonade rules are in effect.
• Withdraw objective rules are in effect for the Government player. One Permanent Victory Banner is gained for each Government unit or lone leader that starts the turn on the Government baseline, is ordered and exits the battlefield.
• A Jacobite player gains 2 Permanent Victory Banners at the start of his turn, when a Jacobite unit occupies Bonar Bridge.
• The stream is impassable.