Written by alecrespi. Posted in Rules

To prepare the gaming area, follow the instructions below. First time players should consult the “Game Area” diagram as a reference to where the various game elements should be placed.

1. Choose a Scenario and Nation

Players must first choose the game scenario for their session.
Scenarios can be found in the enclosed Scenario Guide, online, or in the planned expansion sets for TIDE OF IRON. After a scenario is chosen, players must decide which nation each player will be representing. In this TOI base game, players have the choice of controlling either the German or the American forces.

Important: Throughout this rulebook, we assume that you will be playing the scenario “At the Breaking Point” with two players – one player taking the role of the Germans, and his opponent taking the role of the Americans. It is also possible to play TOI with three or four players, as explained on pages 35-36.

2. Create the Game Board

Following the scenario instructions, players must find the relevant map boards and arrange them together as instructed to form the game board. Once assembled, many scenarios will require additional map pieces and special tokens to be placed on the game board. For more information on setting up the game board for a scenario, please read the “Setting Up the Game Board” section at the beginning of the enclosed Scenario Guide.

As shown in the “Game Area” diagram, the area directly in front of a player is his play area. This is where a player keeps his Initiative card, his available command, and any relevant activated Strategy cards. The area to a player’s right is his HQ area, where he keeps his Strategy card decks and available (but unactivated) Strategy cards. It is important that players keep their play areas and HQ areas separate.

Each player now claims any specific Strategy card decks that his nation is granted (as indicated by the scenario), shuffling each deck and placing each shuffled deck facedown in his HQ area.
Then each player draws a number of starting Strategy cards as indicated by the scenario and places them faceup in his HQ area. These cards may be drawn from any of the Strategy decks in a player’s HQ area, in any combination the player wishes, including all from the same deck. These will be the available Strategy cards that the player may activate during the game round.

Example: In the “At the Breaking Point” scenario, the German player is given the “Morale I” and the “Command I” Strategy card decks. He shuffles the two decks separately and places them facedown in his HQ area. The scenario gives the Germans 3 starting Strategy cards. The German player chooses to draw 2 cards from the Morale deck, and 1 card from the Command deck, placing all 3 cards faceup in his HQ area.

4. Place Round Marker and Game Tokens

Each scenario details the number of starting infantry, vehicles, and squad bases available to each nation (divided into two divisions).
Before beginning the game, each player must locate these plastic pieces from the game box, placing them in his play area.
Then, each player must proceed to build his squads by placing his infantry figures into the squad bases. This is done by pushing the peg, found below each infantry figure, into the holes located in the squad bases. When a squad base has each of its four holes occupied, that base is considered full. A squad base with a full contingent of infantry (i.e., with all its holes occupied) is said to form a “full squad.” A player must always build full squads during setup.
Note that some infantry figures (such as the mortar and machine gun crews), take up two holes in the base. Thus, for example, a squad would be full if it included two mortar crews.
Unless the scenario designates otherwise, players are free to customize their squad bases with the mix of scenario-provided infantry types that they deem appropriate for their strategy.

Example: During setup of the “At the Breaking Point” scenario, the American player must create his 11 squads from the figures listed by the scenario. In his first squad, he decides to place 1 machine gun crew figure (which takes up 2 of the 4 available slots in the base) and 2 regular infantry figures (each of which takes 1 slot in the base). He places this full squad in his play area, and starts assembling his next squad. This continues until the American player has assembled all 11 of his squads.

All customization of squads and subsequent placement on the game board are done in order of initiative. To speed up this part of the game setup, if players agree, they may customize their squads simultaneously, even behind a screen (such as the game box lid) for secrecy.

Divisions and Base Colors

In TOI, each nation is provided with 12 plastic squad bases in each of two shades (for a total of 24 bases per nation). The Germans have 12 squad bases of a light grey color and 12 bases of a darker grey color, while the Americans have 12 squad bases of a lighter green color and 12 bases of a darker green color.
These lighter or darker shades only have significance in a three or four-player game, in which each member of team controls one division of his team’s forces. The differently shaded bases are used to show which units belong to each division. See pages 35-36 for more information.
Unless stated otherwise, in a two-player game these darker and lighter shades have no game effect. Each player simply takes control of all the figures and bases of both divisions from the given nation.

6. Place Starting Units on the Game Board

Now, in order of initiative, players place their units on the board in the areas indicated by the scenario. The player with initiative places all of his units first, followed by his opponent. Make sure that no hex exceeds the stacking limit (see sidebar).

Example: In the “At the Breaking Point” scenario, the American player starts the game with initiative. He places his 11 squads on the board as directed by the scenario instructions, then the German player places all his units.

In order of initiative, each player may place any of his units in “opportunity fire” mode (also called “Op Fire”mode) before the first game round. This represents the readiness of such a unit to fire at enemy units (the rules for opportunity fire will be explained later). This is done by placing an activation token with the “opportunity fire” side up by a specific unit, indicating that the unit is now in “Op Fire mode.”
As you will read later, a unit placed under Op Fire is considered to be activated. An activated unit is not able to move or fire normally during the upcoming game round. We recommend that during their first game, players refrain from starting any of their units in Op Fire mode.

At the start of a scenario, each player is allotted a number of infantry figures, which he uses to customize his squads. Each of the four holes in his allotted squad bases must be filled. Figures are inserted with their peg fitting into one of the holes in the squad base. Note that some figures (the mortar crew and the machine gun crew) are considered a single figure but take up two holes on the base.
Certain scenarios grant players specialization tokens. A squad may have a single specialization token placed into the slot on the back of the base. For more information about specialization tokens, see page 44. 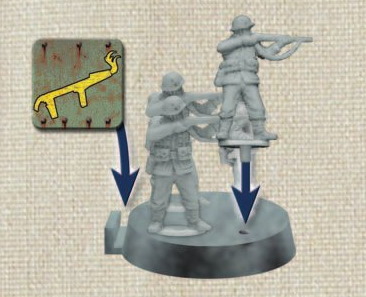 THE LANGUAGE OF TIDE OF IRON

Throughout this rulebook and on the game cards, we will use special terms to describe game components and circumstances. These include:

Both during setup, and while moving units during play, players are limited to a maximum number of units in each hex, also called the stacking limit:
A single hex may contain up to three units, but never more than two vehicles.
Stacking limits never prevent a unit from moving through a hex full of friendly units, but a unit may never end its movement in a hex if doing so would exceed the hex’s stacking limit (that is, a unit may not stop in an already “full” hex).
If a unit’s movement is stopped (due to being pinned by opportunity fire, for example) in a full hex, the unit is returned to the last non-full hex it moved from.