Paratroopers from the 82nd and 101st Airborne divisions have dropped in behind enemy lines near Ste. Mere-Eglise on the eve of D-Day. The Americans must secure the village and avoid German ambushes, sniper attacks, and random patrols.
They have no heavy weaponry, armor, or air support and must rely on superior tactics to win the day. 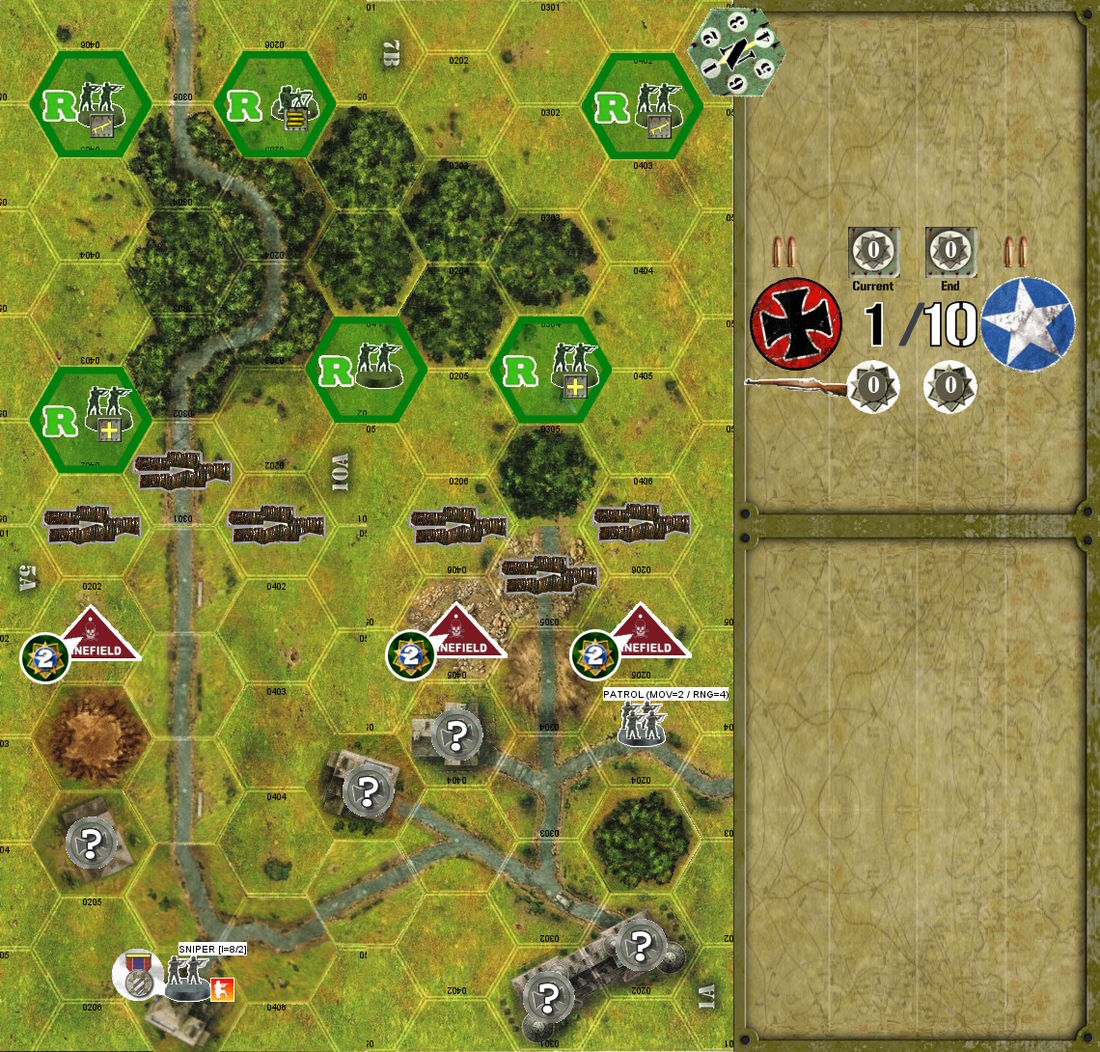 SNIPER UNIT: There is a German sniper team within the bell tower (marked by a victory objective marker on the map). This unit can not move and can not be attacked and is continually in Op fire mode.
Place a "pinned" marker in the squad base to indicate that it is a sniper unit. Sniper squads consist of two infantry units, a shooter and a spotter. The sniper unit only attacks with an attack power of 2 but they can make multiple Op fire attacks per round similar to machine gunner units. The sniper also has a normal range of 8 vs. infantry.

PATROL UNIT: A single German squad is placed on the board during setup which is on PATROL. They start at the southern road hex in 1A and they continue to move up the road until an enemy unit is within LOS. Once the PATROL has LOS on an enemy unit, they will advance and fire on that unit until it is destroyed. The German PATROL squad can not leave the road hexes no matter what. The PATROL squad can only move 2 hexes at a time and can only sight and fire upon units 4 hexes away.

Special Rules: When a squad enters a hex containing a "?" concealment marker an event check occurs. Roll a single die and resolve on the Event table below. If a German squad spawns, then another die check is made on the Personality table. The squad will perform according to its personality until the last round or it is eliminated.

Unit Placement: When an enemy squad is spawned , roll one die and check the artillery marker to determine direction of placement. Unless otherwise stated, the squad should always be placed on the closest legal hex to the squad that triggered them. If the squad placement is off the board, the die is rerolled until a legal placement is the result.

Initiative: When a German squad spawns they will not attack until the start of the next round unless otherwise stated. At the start of each action phase, all spawned German squads will have initiative.

Once the squad type is determined place a numbered objective marker in the squad base that corresponds with the squad personality number above.

The Chinese soldier was tough, brave, and experienced. After all he had been fighting on his own without help for years. He was a veteran among the Allies.