Battle of El Guettar
Tunisia March 23, 1943. After the resounding defeat at the hands of the Germans in the Battle of Kasserine pass in late February 1943, the inexperienced and undisciplined Americans were whipped into shape by General George S. Patton who had been appointed to replace General Fredendall to do just that.
In an attempt to press home their advantage, German General von Arnim decided to attack US forces guarding the mountain pass near the village of El Guettar. The Americans, who had been planning an attack of their own and had sent their armor further North to attack the Axis forces, found themselves confronted with the full might of the German 10th Panzer Division.
Will the Americans’ newly-found resolve prove strong enough against the German Steel? 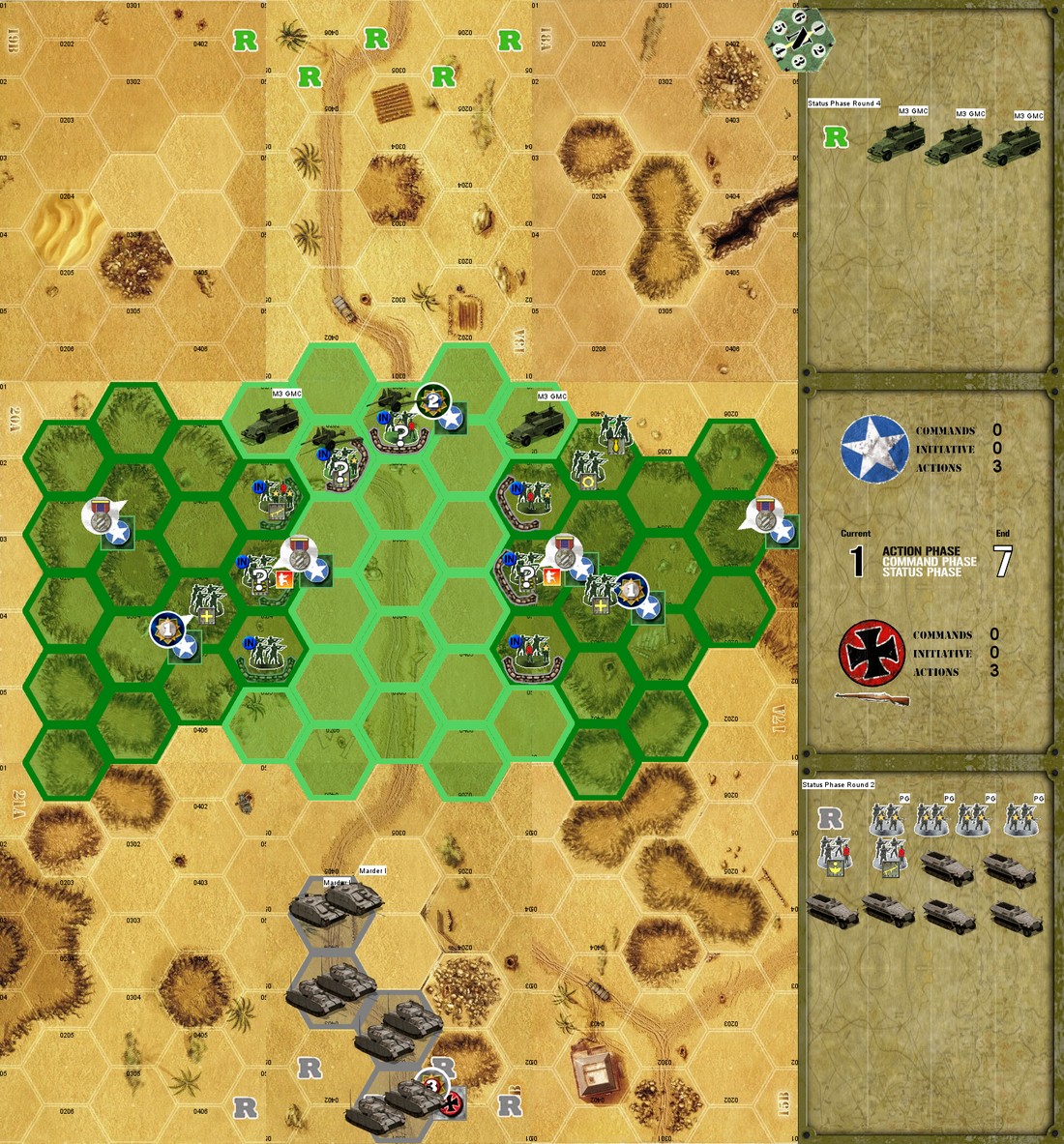 M3 Gun Motor Carriage (GMC) tank destroyer halftracks
This scenario makes use of an American armored unit type first introduced with an Operations Card produced by 1A Games for the Days of the Fox expansion: the M3 Gun Motor Carriage (GMC) tank destroyer halftrack. (This is card number A06, “Gun Motor Carriage.”)
The M3 GMC was equipped with a variant of the 75mm M1897A5 artillery gun, which was functionally the same gun as the M3 Lee/Grant and the majority of M4 Sherman medium tanks used during the war. Upon its introduction into combat by the United Kingdom in North Africa in May 1942, the sponson-mounted 75mm gun on the M3 Lee/Grant proved to have a longer range and greater Penetration capability than most Axis armored units. It was also effective against infantry, because ammunition for the gun included high explosive, anti-personnel rounds.
For these reasons, players may opt for a more historically accurate alternative to this unit’s stats than those represented in the Operations Card (see below).

Suppressive fire and the Open Top vehicle trait
The Marder I unit (and, optionally, the M3 GMC unit—see below) is considered to have an Open Top. This means the vehicle crews are susceptible to suppressive normal and fire-and-movement attacks from squads, other vehicles, and equipment units, as well as suppressive Area Attacks from mortar squads and artillery and air support Strategy Cards. Hits from such attacks upon open-topped vehicles are calculated in the same way as suppressive fire against squads, and indicated using Squad Condition tokens. (For more background, see the Board Game Geek thread “Open Top; a new (?) realization?” at https://boardgamegeek.com/thread/2289403/open-top-new-realization.)

Marder I
The German Marder I was a self-propelled anti-tank vehicle equipped with a 75mm PaK-40 gun (which was the precursor to—and functionally the same as—the gun fitted to Panzer IV tanks beginning March 1942 with the Ausf. F2 version). It featured a fixed, open-topped turret on a tracked chassis.

The Marder I unit stats for this scenario are:

Hills & ridges
All Hill overlay tiles are considered to be Level 1 Hills.
Hill hexes are impassable for vehicles.
Reminder: Per standard rules, no units may enter Level 2 Hill hexes from Level 0, or vice versa!
Units attacked from a lower elevation get +1 cover. This cover does not apply when under artillery or air attack, but it does apply when such a unit is attacked by a mortar.
Designers’ note: Although thematically it would be befitting not to apply the cover bonus to mortar attacks, mortars are considered strong enough already by the designers. So the decision not to grant the additional cover against mortar attacks is purely for game balance reasons.

Concealment of anti-tank (AT) guns
AT guns may be assigned Concealed markers. They are revealed as per normal rules.
Also per normal rules, note that units may not set up concealed in hexes with Victory or Command Objective markers, nor move into such hexes and remain concealed.

If you play the scenario and the two players are of unequal skill, the following rules may be used for further balancing. Note that the Deadly Artillery rule below is, in fact, historically accurate, but it is likely to affect the scenario’s balance very strongly!

To help the Americans, Choose ONE of the following:

To help the Germans:

M3 Gun Motor Carriage (GMC) tank destroyer halftracks
Reflecting the Days of the Fox expansion Operations Card produced by 1A Games, all US halftracks in this scenario are the M3 GMC tank destroyer variant. Against vehicles, its Range = 6 and Firepower = 6. Against Infantry, the standard halftrack unit stats are to be applied (Range = 5 and Firepower = 4). It has Concussive Firepower capabilities (+3 range and +3 firepower when attacking squads in buildings or pillboxes). This unit may not carry squads.

If both players agree, the following more historically accurate alternative unit stats may be applied, instead of those indicated on Operations Card A06:

JVHillegas-Elting wrote:
I got to help play-test this one, so I played it about six times. It was a lot of fun

If I didn't remember wrong you should be able to report more than one gameplay.
You can click USA/GER icon to assign a victory and increment the "played counter".

JVHillegas-Elting replied the topic: #645 6 months 2 weeks ago
I got to help play-test this one, so I played it about six times. It was a lot of fun
Read More...
Original Layout PDF (search for CODENAME).