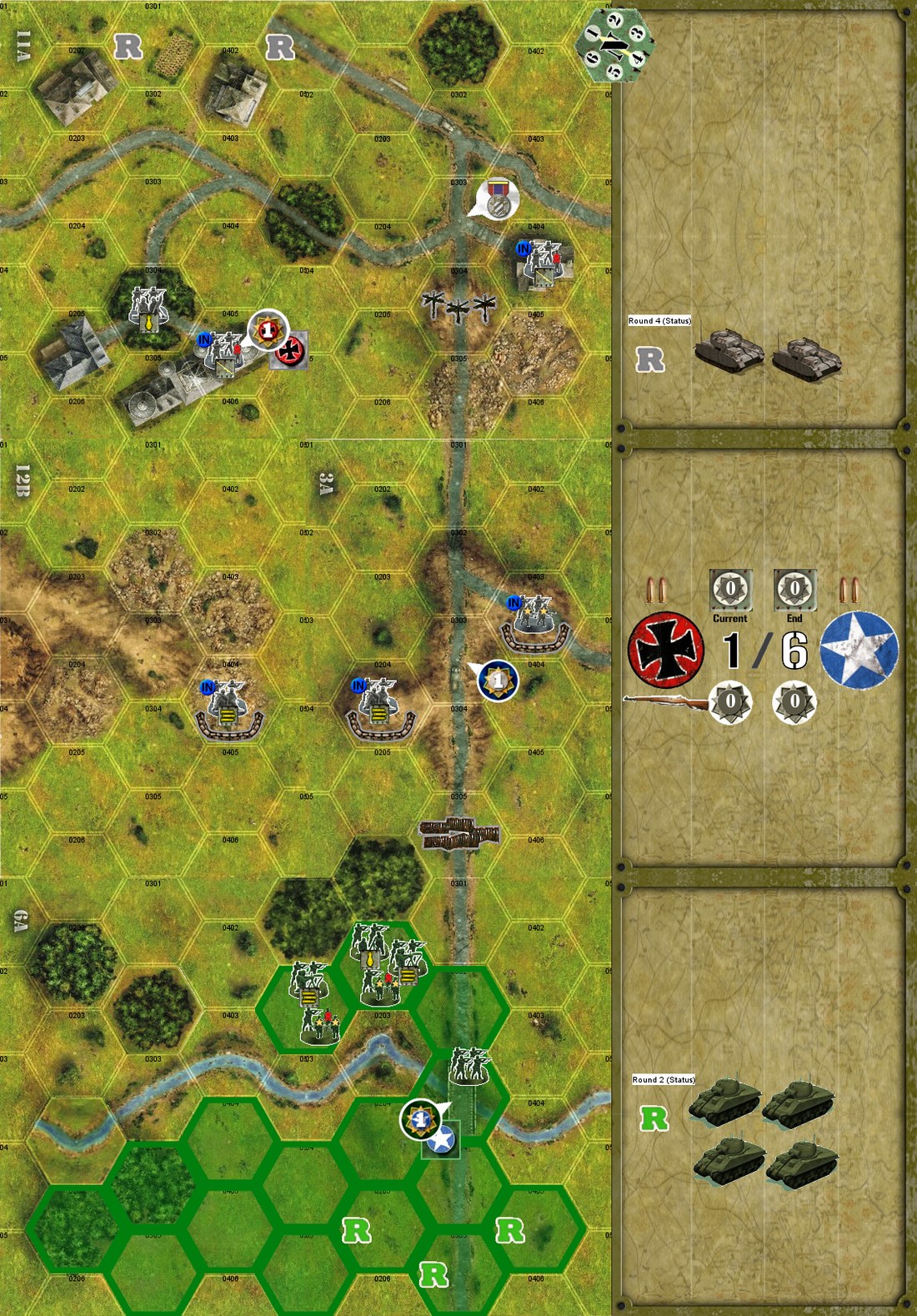 123 Crossing the Moselle
Last edit: 7 months 3 weeks ago by alecrespi.

Less More
7 months 3 weeks ago - 7 months 3 weeks ago #783 by alecrespi
Replied by alecrespi on topic 123 Crossing the Moselle
During Round 2 (status phase) I noticed that the US only has 1 "R" hex while they have to call 4 Sherman tanks.
We played by having enter 2 of them at the end of turn 2 and the other 2 in turn 3.
Clearly those who entered at the end of turn 3 were only able to make 2x advances

and 1x fire and move

at the end, without bothering the panzers iv in the least.
Even if US player had some really lucky shot [img]/tideofiron/media/kunena/emoticons/black dice.png[/img] (I managed to kill 2x German squad bases with pinned

--> routed) and Axis player some unlucky ones [img]/tideofiron/media/kunena/emoticons/red dice.png[/img] (his mortar failed to hit anyone) vicotry went to German player.

I don't know if the final result would have changed by adding an "R" hex on US side, or at least allowing tank entrance on map with and "Advance" or "Fire and Move" action...

In the end I really enjoyed this scenario.

Less More
7 months 3 weeks ago #785 by Brummbar44
Replied by Brummbar44 on topic 123 Crossing the Moselle
Unfortunately, I can't find my original notes on this scenario...so I'm not sure of my intent (written well over a decade ago now!).

Perhaps adding to 'R' entry points (in the hexes to each side of the road where the original 'R' is) would make the difference?

In the meantime, I'm glad you enjoyed alecrespi!
The following user(s) said Thank You: alecrespi

Less More
7 months 2 weeks ago #786 by alecrespi
Replied by alecrespi on topic 123 Crossing the Moselle
Thank you Malcolm for the update!
I've refreshed both scenario VSAV inside current Vassal module and scenario picture on the website.
Will let you know how it works during the next game.

Today we are crushed by the sheer weight of the mechanized forces hurled against us, but we can still look to the future in which even greater mechanized forces will bring us victory. Therein lies the destiny of the world.