The WWI battlefield game board (hereafter referred to as the battlefield) has a hex grid, 12 hexes wide by 11 hexes deep. One side of the game board pictures a war torn landscape and on the other a countryside setting. The battlefield is divided into three sections by two dotted lines, giving each player a left flank section, a centre section and a right flank section. Where the dotted line cuts through a hex, the hex is considered to be part of both the flank section and the centre section.
The half-hexes that border the sides of the battlefield, are not considered to be part of the Command and Colours WWI field of battle. 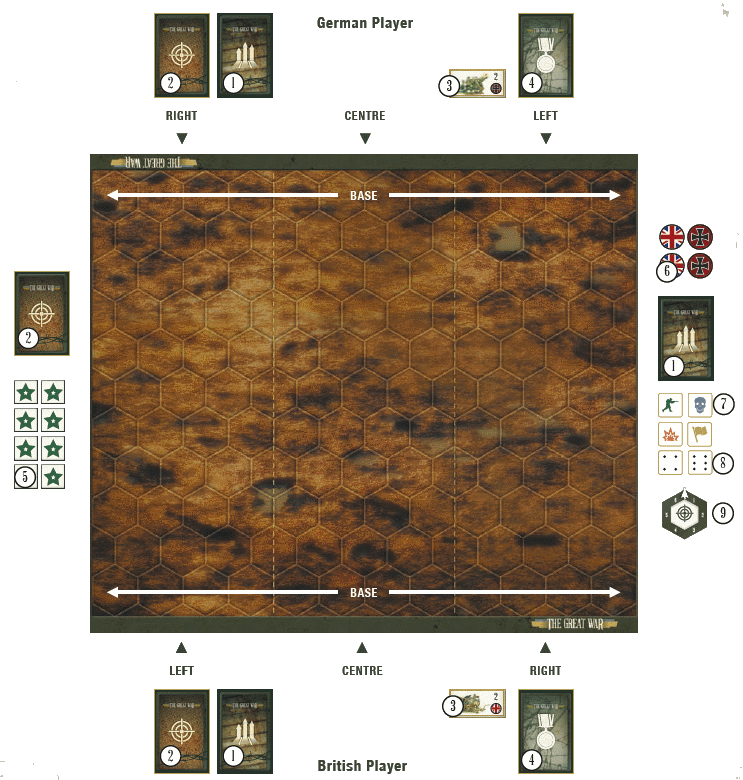 The terrain tiles represent a wide range of terrain features and are placed on the map board to recreate a historical battlefield for a scenario. For a description of all Terrain: see the Terrain rules section.

Command cards are used to order troops to move, battle, or do something special. Units may only move or battle when given an order. For a description of each Command Card: see the Command Card rules section.

These cards represent military actions and sometime unexplainable WWI happenings or unit abilities. These cards may hinder the opposition army, enhance a player’s units, or may instantly change the course of a battle.

In terms of game play, HQ tokens are a measurement of each army’s resources, leadership and luck. HQ tokens act as the currency that fuels the play of Combat Cards and combat of an army’s reserve artillery.

These double-sided tokens have an image of wire on one side and shell craters on the other.

These man-made battlefield obstacles were positioned on a battlefield to hinder and break any potential enemy attack. Wire tokens, like terrain tiles, are placed on the battlefield prior to a battle as indicated by the scenario map.

The war torn sections of No-Man’s-Land was the sight of numerous craters created by constant artillery shelling. These holes in the ground became places of refuge for infantry as they advanced, as well as obstacles they had to overcome. Shell crater tokens are created and placed on the battlefield before the battle starts during No-Man’s-Land Shelling and in some cases from reserve artillery combat.

The forces that players command on the battlefield are represented by 162 detailed plastic figures. The German and British figures of each army have their own distinctive colour.
The machine gunner figures need to be assembled prior to your first game. 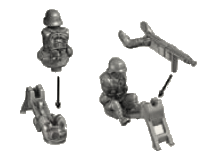 The targeting dice are used in conjunction with the targeting template and other game functions.

Victory Medal tokens have a German symbol on one side and a British symbol on the other side. Victory Medals are gained when the last figure of an enemy unit is eliminated and by capturing a certain terrain hex or other battlefield objective. In some battles, the Victory Medal is placed directly on the battlefield, with the army’s side face up to indicate the army has captured the objective and is in control.
Players are not limited by the number of wire/shell crater tokens or the number of battle dice included in the core game. Should the wire/shell crater tokens be depleted, players should substitute another marker as necessary. If a player must roll more dice than are available, he should re-roll any of the previously rolled dice and track or remember the previous results.