Key Rule - When the reserve artillery battery is ordered, it is always the first unit to combat. 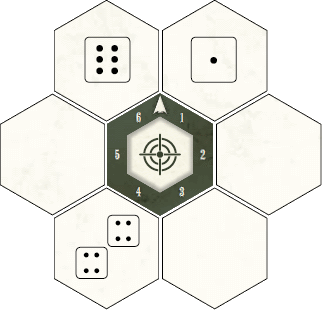 For example: the reserve artillery token has a strength number of 4, the player may spend up to 4 HQ tokens and for each HQ token spent, the player will roll one targeting die.

Roll the targeting dice and match the number rolled with the hexes around the template. Set each targeting die on its matching hex. Any dice that rolled the same numbers are also considered “On Target”, as well as shelling the surrounding hex.

To determine the result of the reserve artillery combat, battle die are rolled for each hex with one or more targeting dice and for the On Target hex.

Start with the On Target hex, the hex that the template was placed on and roll 1 battle die for any targeting dice that were determined as being on target.

After the On Target hex is resolved, start with the hex 1 on the template, going clockwise around the template roll 1 battle dice for each targeting die on these hexes. Determine hits and retreats for each hex before resolving the next hex.

When no unit or wire token is in a hex, you need not roll the battle dice for these hexes.

For each hit scored, one figure is removed from the unit. When the last enemy figure is eliminated in the unit, place a Victory Medal on your Victory Medal Card. If more hits are rolled than the number of figures in the enemy unit, these additional hits have no effect.

Collect one HQ token for each HQ symbol roll.

A flag rolled does not cause a hit, but may cause the unit to retreat. After all hits in a hex have been resolved and casualties removed, retreats are resolved: see the Retreat rules section. Some terrain will allow a unit to ignore one or more flags: see the Terrain rules section for terrain effecting flags.

For example, 4 targeting dice are rolled and the numbers rolled are 1 - 4 - 4 - 4. Place the dice on the proper surrounding hexes. Because three targeting dice rolled number 4, it is a devastating direct hit to the On Target hex and a shell crater is placed on the hex. Three battle dice are then rolled on the On Target hex, as well as allowing hex number 4 to be shelled with three dice.

from personal experience I can tell you it happens
MDog replied the topic: #1191 3 months 1 week ago
From all rules and forum comments I've read, the same number rolled from 3 dice must appear, and the chance of that occurring is next to nothing.

Draco Paladin wrote: Is the reserve artillery unit a single unit that can only be ordered once on a players turn, or if you are able to order units in more than one sector, can it be ordered once per sector?


it is a single unit.
"A player’s reserve artillery unit does not have any figures, instead it is represented by a reserve artillery token, in a player’s play area. "
www.commandsandcolors.net/thegreatwar/th...serve-artillery.html

Conceptually you could have more than 1 Reserve Artillery units in a scenario. Hasn't ever happened in a scenario, but if you had two Reserve Artillery units, a 5 & a 4 strength, you could order the 5 in one section and the 4 in another with a multi-section card like Recon in Force (and a huge number of HQ tokens). Would cost 1 order for each unit.
Draco Paladin replied the topic: #586 5 years 6 months ago
Is the reserve artillery unit a single unit that can only be ordered once on a players turn, or if you are able to order units in more than one sector, can it be ordered once per sector?

Mark McG replied the topic: #547 5 years 11 months ago
looking at the FAQ,the actual literal wording is correct. Has to be 3 dice of the same number. Example 3 (or bottom Left diagram) gives such an example, and indicates NO cratering.

www.commandsandcolors.net/thegreatwar/th...serve-artillery.html
lowroller replied the topic: #546 5 years 11 months ago
The rules say that "When three or more targeting dice roll the same number, a shell crater is placed in the On Target hex.'

This is very clear, and by strict reading it means that a roll of 1-3-3-5-5 would NOT cause cratering, as no 3 dice rolled the same number.

However, after an initial faulty memory of the rule, we loosely interpreted it as 3 On Target dice cause cratering, which means that this roll WOULD crater the hex.

Should we follow the strict wording, or is our interpretation the actual intent?
Read More...