The battle of Cividale del Friuli on 27 October 1917 is only the first of the series of battles that were fought, during the Retreat of Caporetto by the Italian Army, in an attempt to block, or at least slow down, the Austrian and German troops that were advancing rapidly towards the Venetian plain.
These were short and furious clashes, fought by the Italians outnumbered, with few divisions sent to the front to join the battered remnants of those retreating brigades, which had already been defeated in the mountains to the East. There was no lack of courage in those soldiers, who sacrificed themselves to allow the bulk of the armies to fall back, to re-organize themselves, beyond the great natural border formed by the Tagliamento River - erroneously considered a 'natural obstacle' for the Austro-German forces. These were little-known battles fought by troops just arrived in line or by veterans demoralized and not used to having a 'defensive tactic'. Poorly coordinated efforts that failed to prevent the rapid conquest of all of Friuli and a portion of Veneto. There hadn't been time to set up fixed defense posts: there were no barbed wire obstacles, bunkers or deep trenches; and to make the situation even worse the chronic lack of support from the Italian field artillery.
The direction of attack to obtain the outlet in the plains, in the direction of Cividale del Friuli was planned by generals Below and Krafft as a target for the 14th Austro-German Army. For this reason, in the plain east of Azzida and the San Quirino bridge, at dawn on the 27th, were concentrated 5 of the 7 divisions that the German Grand Headquarters had sent to Italy to help the Austrians. Because the divisions 'Avellino' and 'Milano' had been almost completely disrupted when arrived during the first fights, against the German divisions, remained the 'Jonio' division and the 'Ferrara' division, which supported almost all the defense effort of the hills to the north-east and east of Cividale: Monte dei Bovi, Purgessimo and the ridge of the Castelmonte Sanctuary. The decision to destroy the bridges (like the wonderful one that crossed the Natisone River in Cividale, called 'Ponte del Diavolo'), did not slow down the impetus of the enemy's advance. Only the tenacious resistance and courage on the Italian side, inferior in number and armament, in front of Cividale, stopped the advance of the enemy divisions for a few hours. However, at five in the afternoon the Germans occupied Cividale while on the surrounding hills, isolated Italian formations were fought for two hours more in vain, completely surrounded by the enemy. 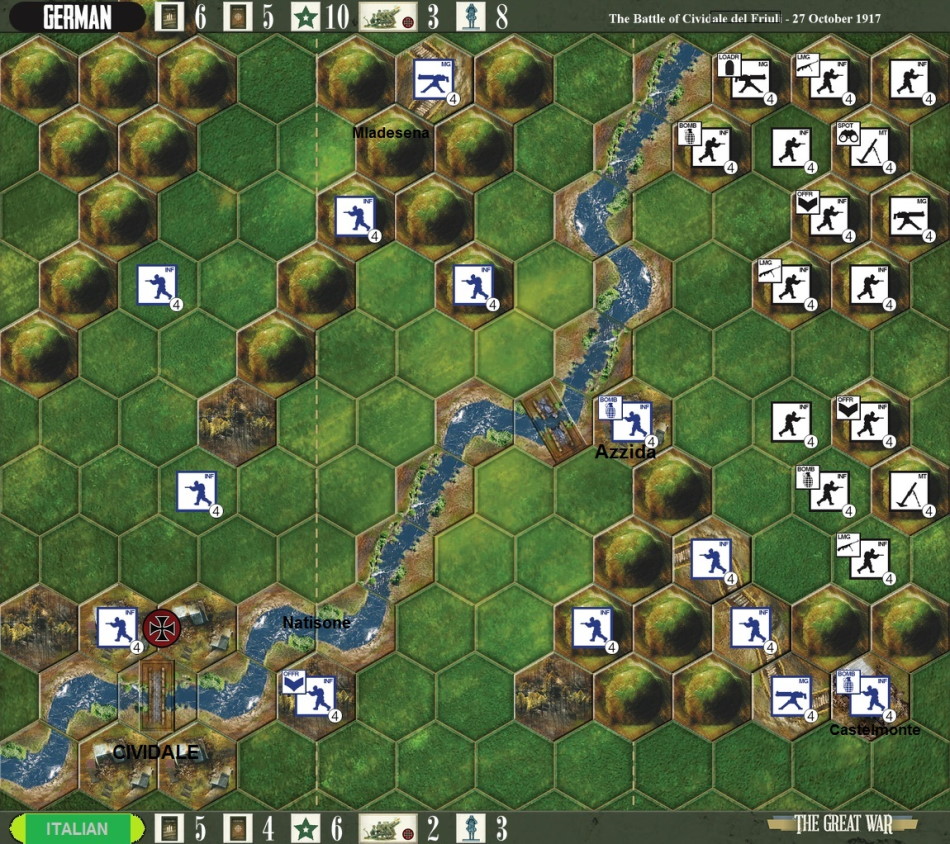