The Battle of Solstice (also known as the Second Battle of the Piave) was a battle on the Italian front of World War I. The main offensive (Battle of the Solstice) began on the night of June 15, the Austrians, immediately were blocked on the mountains and on the plateaus in the Northern sector by the firing of Italian guns: the Italians had gathered intelligence on the enemy plan and opened up half an hour before the Austrians, slaughtering their forces as they moved into position for the attack. While on the Piave and Montello it would last until 23 June with initial successes. The stretch of the Piave from Valdobbiadene to Grave di Papadopoli was defended by our 8th Italian Army. On the night between 14 and 15 June the 58th division, which guarded the southern area of Montello, was changing the front line troops (Tevere and Lucca brigades) when it was attacked by two Austrian divisions and forced to retreat to the line of extreme defense. After a few hours of violent fighting on the Montello the departments of the two armed forces mixed and the Italian artillery was temporarily silenced, this allowed the passage of the Piave to the Austro-Hungarian divisions using footbridges, boat bridges and barges. 100,000 Austrians successfully crossed the Piave, river swollen by the flood, establishing bridgeheads on the western bank. The attack on the Italian lines manifested itself vigorously towards the town of Nervesa, where however the Piacenza brigade stood in defense at the Villa Berti, on the outskirts of the small town of Nervesa and on the embankment of the local railway. The fight was furious for several days, the strength of the Italian troops, strengthened by the elite troops of the 'Arditi', allowed the retreat to be halted, joining forces and giving life to a stronghold on the outskirts of the town of Nervesa. On the north side of Montello, at Casa Serena, the Austrians collided with the 27th Army Corps and were stopped. But it was at the stronghold of Villa Berti that the fight continued furious, due to the Austrians' need to break through and head towards the Ponti della Priula to rejoin the troops attacking in the lower Piave, near the Grave di Papadopoli islet. Having contained the northern threat, Diaz deployed his reserves southwards against the Austrians’ bridgeheads. Finally, from the night of June 19, the Italian Command engaged the Italian reserves, which slowly, and with little coordination, created a stopping line between Giavera and Spresiano, changing the fate of the battle in favor of the Italians.. 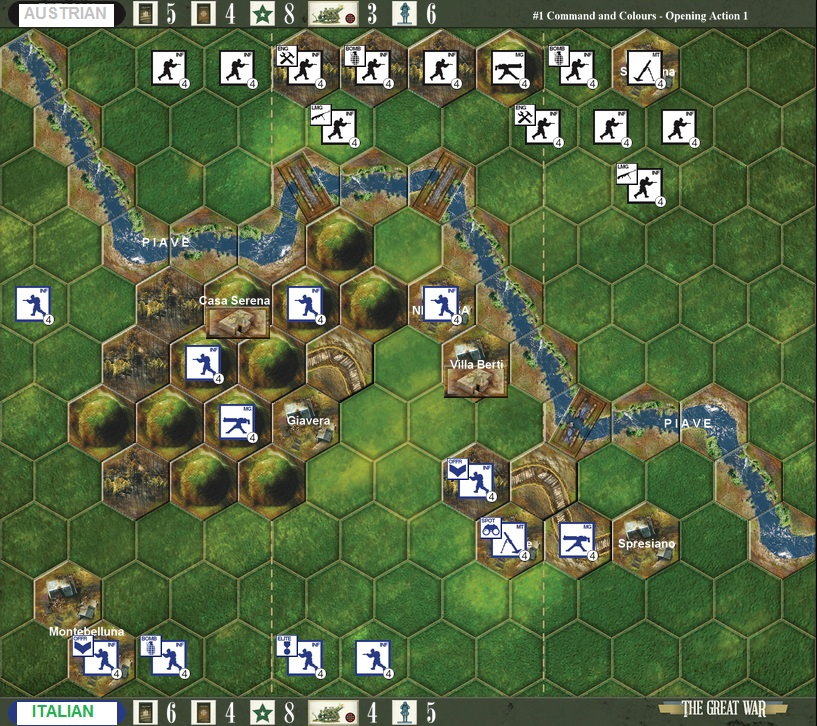 The growing domestic crisis in the Habsburg Empire in 1918 sped up Austrian preparations for a final offensive aimed at bringing about Italy’s military collapse. With Russia out of the war, Vienna concentrated all of its reserves in Italy. The Austrians were divided in two army groups: Army Group Tyrol (10th and 11th Army) under Conrad von Hötzendorf in the north; Army Group Piave (6th Army and 5thIzonzoarmee) under General Boroevic in the south. The former aimed at seizing the Altipiani so as to flank the bulk of Italian forces on the Piave; the latter insisted that the main thrust be launched on the Piave in order to isolate the Grappa sector. The final plan resulted in a two-pronged attack which dispersed the Austro-Hungarian forces. The Austrians gathered fifty-eight divisions supported by 5,000 guns, as opposed to fifty-five Allied divisions, including five Anglo-French divisions, supported by 4,500 guns.The Italians had other advantages, namely the ability to hold nineteen divisions in reserve and use interior lines to concentrate them where needed.
The attack plan suffered from personal and ideological clashes between the two Austro-Hungarian leaders, Conrad and Boroević: the effort, instead of being concentrated in one point, as in the Caporetto offensive, was divided between the two respective groups of armies.
In the battle, the massive use of the Italian Air Force and bombing masses represents the decisive element of the retreat of the enemy who had launched the last offensive. The walkways thrown on the Piave by the Austrians on June 15 were incessantly bombed from above and this led to a slowdown in the supply of weapons and food. This forced the Austrians on the defensive and after a week of fighting, in which the Italians were beginning to gain the upper hand, Boroević von Bojna ordered the retreat across the river to avoid the complete annihilation of his bridgeheads. The lack of clear tactical superiority and the reconstituted strength of the Italian army, implemented by Diaz after Caporetto, condemned the Austro-Hungarian offensive to failure.

Discuss this article
Log in to comment
Posts in discussion: BR03 - The Battle of Solstice (The Montello sector) - 15-23 June 1918