The large Italian retreat after the collapse of the Isonzo's front had to be covered by rear units. One of these commanded by Major General Antonio di Giorgio, was deployed on the middle course of the Tagliamento River. Cadorna ordered him to defend the bridges of Pinzano and Cornino to the bitter end. In the general chaos and 'fog of war' of those hours this was a far-sighted decision. In fact, von Below, had immediately identified bridges as primary objectives and given the order, on the night of October 27, to conquer bridges before the destruction of the enemy.
The Italian defenses were concentrated on shallow trenches on the flanks and slopes of Mount Ragogna -an elongated 500-meter-high moraine hill that dominates the three bridges and the bend in the river- and on the islet of Clapat. The Ragogna bridgehead was garrisoned by the 'Bologna' brigade and by elements of the 'Barletta'. The islet of Clapat, in the middle of the wide Tagliamento river bed, controlled the two sections of the Cornino road and railway bridge. several hundred infantrymen of the 'Siracusa' and 'Genova' brigades, armed with machine guns, were assigned to its defense. Few Italian artillery batteries with few ammunition were placed on the slopes of the mountains on the right shore, still Italian.
The battle of the middle Tagliamento began on the evening of October 30, when, after the conquest of San Daniele, the 12th German Infantry Division, the 50th and 55th divisions and part of the 13th Austrian 'Schutzen' division, advanced to attack the Italian troops who defended the bridge of Pinzano (180 mt. of reinforced concrete), Pontaiba (wooden bridge) and the largest bridge of Cornino.
At dawn on the 31st the Austrians of the 50th and the Germans of the 12th attack the village of Ragogna, conquering the center (S.Giacomo). The next day a furious attack by the Austro-Germans broke out, armed with deadly light machine guns L.M.G. 08/15 but they are rejected 300 meters from the Pinzano bridge. The Italian engineers set the Pontaiba bridge on fire and thus the only escape route for the Bologna infantrymen remains the Pinzano bridge which they are defending strenuously. On the right, meanwhile, the Austro-Hungarian 50th division managed to conquer the north-eastern and central sectors of Monte di Ragogna, making the Italian defenders move back to S. Pietro (village of Ragogna). Fearing that the Pinzano bridge would fall intact in the enemy's hands, at 11:25 am it is blown up by the Italians, condemning the units that they continued in fighting in Ragogna area to imprisonment. They resisted until the afternoon, when they were overwhelmed. The Italian artillery contributed to the size of the tragedy because, after the demolition of the bridge, opened repression fire towards the mountain of Ragogna, killing hundreds of Italians and Austrians. Of the 5000 soldiers of 'Bologna' only 500 were able to cross the river. At this point all efforts were concentrated against the Italian defenses at the Cornino bridge, damaged but not demolished by the Italian rearguards. The 55th Austrian division had already attacked in force on 30 October but the garrison of the little island of Plat had repelled the attack. From 1 November the Italians decided to retire to the right bank of the river and the engineers blew up 20 meters of railway embankment. On the evening of November 2 the Austro-Hungarians launched a surprise assault that caused the breakthrough of weak Italian line: with a perfect support action of the artillery, lined up in front line, Bosnian soldiers overcame the Tagliamento with walkways placed on the damaged pillars and by surprise they fell on the shore right. The 'Lombardia' brigade spread over a large front in the mountains behind the bridge, failed to counterattack effectively. Reinforcements immediately rushed to consolidate the Bosnian bridgehead and the Italian front, after 3 days of resistance, disarticulated on 3 November. At that point the Italian supreme command ordered the general retreat from the Tagliamento to the Piave river. 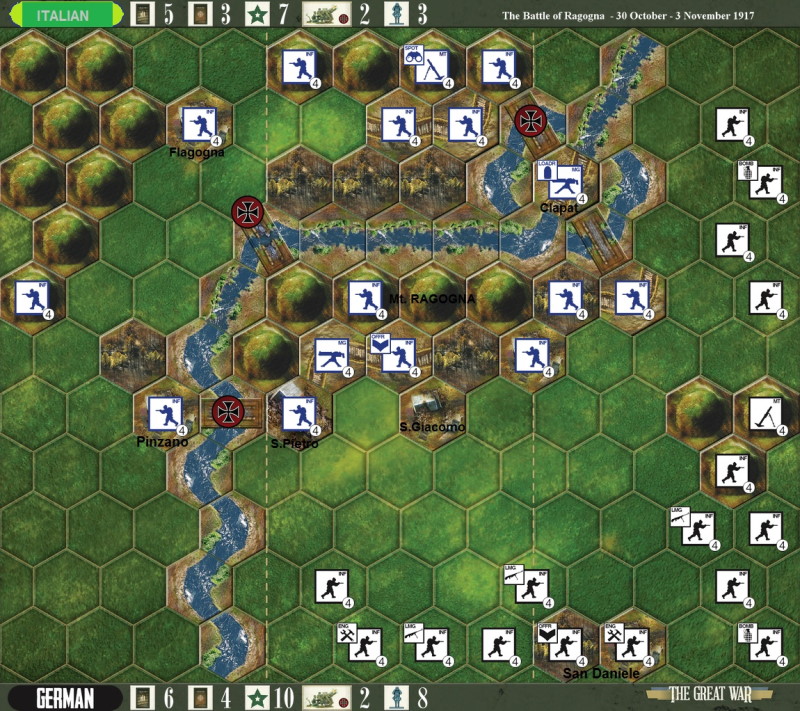 Discuss this article
Log in to comment
Posts in discussion: BR02 - Retreat of Caporetto - The Battle of Ragogna - 30 October - 3 November 1917