Although the 62nd Division met with strong resistance at Havrincourt, Brigadier-General ‘Boy’ Bradford VC, promoted at 25 years of age, did not wait to see the fall of Havrinourt. He advanced with the 186th Brigade and a company of tanks, with orders to take Graincourt and the high ground west of Bourlon Wood. German gun batteries firing from behind Flesquieres ridge into his exposed right flank slowed the advance and when the British finally reached the outskirts of Graincourt, two German guns on the edge of the village opened fire. The guns were overcome and the village was taken somewhat quickly, thanks to excellent cooperation between the infantry and tanks. 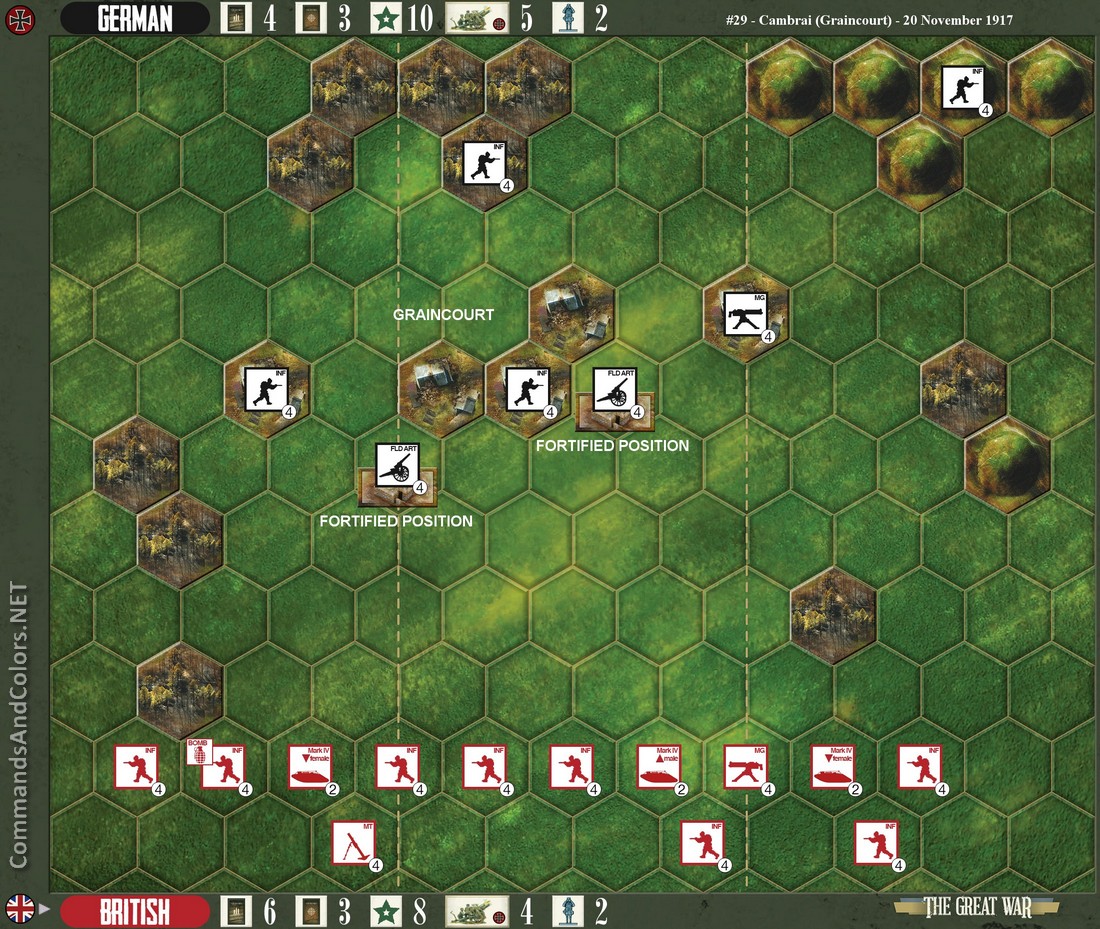 Pevans replied the topic: #1073 1 year 8 months ago
This scenario particularly attracted me because there's not a trench in sight. Playing my nephew, Tom, I drew the British and advanced cautiously, making sure my tanks didn't break down. I carefully manoeuvred the flanking tanks into the centre, so I could use all of them with my "Assault Centre" card. Tom stymied this with a "Lost Messenger" Combat card, damn him!

So my advance proceeded more slowly, the tanks drawing fire while the infantry advanced behind them. The field artillery turned out to be less of a threat than I expected, my tanks rumbling up to the guns and trashing them. Then I moved up my infantry to take the village and win 7:3.

Switching sides, Tom took some risks with his tanks, but got away with advancing faster than I did. The field artillery didn't do any better this time. I made a fight of it, though, moving around the village to deprive Tom of medals. Right at the end, one of the tanks bogged down, but this made no difference at this stage.

Tom and I got enough hits on the tanks that, statistically, we should both have had a couple of successful damage rolls - potentially knocking out a tank, which would have had a significant effect on the result.

This time it was a win for Tom, 7 medals to 5 (looks like a scenario the British will usually win), but I'd managed a couple more medals than he did as the Germans. The aggregate score was thus 12:10 to me. The difference was that I was able to play a couple of "Recon 1" cards to gain "time pressure" medals. (Full report - with photos - on BGG: boardgamegeek.com/blogpost/109502 )
Read More...