After the initial few days on the left bank of the Meuse, German infantry - unable to make further progress - dug in on 13 March and waited. Their wait was not long, for shortly after the German bombardment resumed and another assault was launched against Mort-Homme, appropriately named “Dead Man”, and Hill 304. The fighting for control of these two positions continued for the next week and it was not until 20 March that the French 29th Division defending these positions was finally overwhelmed. 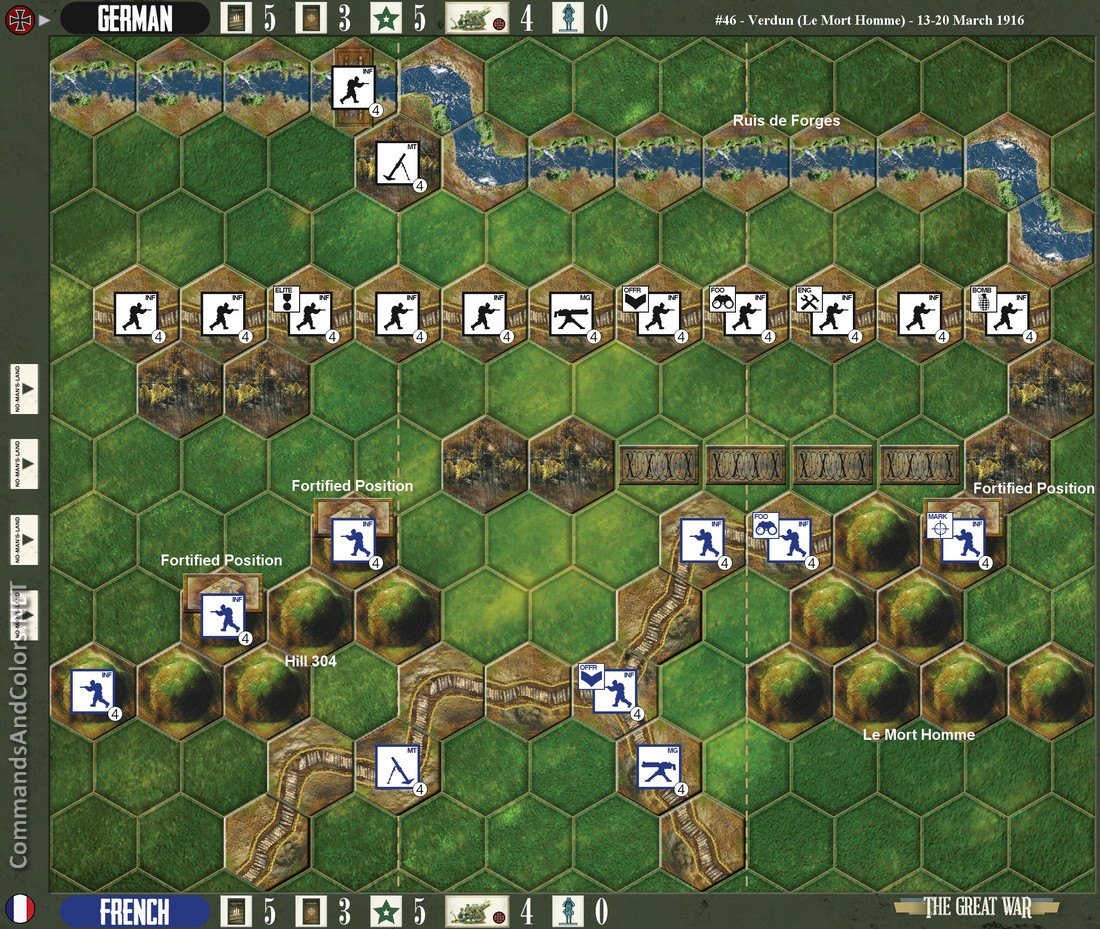 Pevans replied the topic: #1168 10 months 2 weeks ago
Nephew Tom and I decided to try the Vassal module for TGW - and were impressed with the implementation. Fighting over a dead man (Le Mort Homme) tickled Tom's fancy and he took the French to start with.
I opened up with my reserve artillery [Artillery Bombard + FOO] to absolutely no effect. The French replied by dropping a mortar shell on the German Elite unit, causing the first casualties. [And used the Recon Left card to take a medal: 0:1 to the French]
The entire German right flank charged [Infantry Assault] out of their trenches and round the woods to engage the French on Hill 304. Despite being in a Fortified Position, the lead French unit was eliminated. [1:1]
The other two French units opened up on the enemy, damaging two units and forcing one back into the woods. The Germans promptly charged onto the hill en masse [Assault Right], taking out another French unit. [2:1]
The lead German unit on Hill 304 was exposed to fire from the trenches and succumbed. [2:2]
Fighting on Hill 304 continued with the one French unit taking out a German one before retiring to the trenches at half-strength. [2:3]
French forces sprinted across [Infantry Assault] to try to re-take the hill, eliminating another German unit, but leaving the hill in enemy hands. [3:4]
Then it was the turn of the German left wing to attack [Counter-attack], charging up to the French positions and inflicting damage on the defenders.
The French marksman threw back the first attacker [taking a medal for the Recon Right], but then fell to a concerted attack by the other Germans. [4:5]
Another attack on Hill 304 saw the French re-take the hill, eliminating another German unit in the process. [3:6]
With the Germans poised to claim the medal for Le Mort Homme, this battle was actually finely poised before that last turn. That's my excuse anyway.

Switching sides, Tom also attacked on the German right to start with [Assault Right]. The forward French unit damaged the unit in the open [and claimed a medal for the Recon Left - 1:0].
This unit then fell as the German advance continued. [1:1]
Time for the Germans to advance on their left. The French fire on the attackers, but it is returned in spades [Storm of Fire] to eliminate a French unit in the trench! [1:2]
The French throw the Germans off Hill 304, taking out two units, but losing one to a spirited defence [Butt & Bayonet]. [3:3]
German units in the centre join the attackers on their left to give six Germans facing two French.
The attack comes in, removing the French marksman unit from their fortified position while a German unit falls to withering fire from the trench they're attacking [First Strike]. A German unit gets into the trench though. [4:4]
The German unit occupying the Fortified Position on Le Mort Homme leaves the field [Stretcher Bearer], allowing the French FOO to deny the hill to the enemy. [But they gain a medal for the unit in the trench 4:5]
The Germans press the attack on Le Mort Homme, but the French unit survives to take out the German unit in the trench. [5:4]
However, they're in no shape to fend off the attacks any longer as the Germans move onto the hill. [5:5]
The French have a last chance to get back onto Le Mort Homme [using Advance over the Top for extra moves], but fail. [5:6]
Having won as both sides, it's no surprise that Tom has the aggregate victory 8:12. However, it was a hard fight both times and I really enjoyed this scenario. There's a bit more to it than the usual charge-the-enemy-trenches-and-hope strategy.
Read More...