At dawn on 23 August, a German artillery bombardment began on the British lines; throughout the day the Germans concentrated on the British at the salient formed by the loop in the canal. At 9:00 a.m., the first German infantry assault began, with the Germans attempting to force their way across four bridges that crossed the canal at the salient. Four German battalions attacked the Nimy bridge, which was defended by a company of the 4th Battalion, Royal Fusiliers and a machine-gun section led by Lieutenant Maurice Dease. Advancing at first in close column, "parade ground formation", the Germans made easy targets for the Irish riflemen, who hit German soldiers at over 1,000 yards (910 m), mowing them down by rifle, machine-gun and artillery fire. So heavy was the British rifle fire throughout the battle that some Germans thought they were facing batteries of machine-guns.
The German attack was a costly failure and the Germans switched to an open formation and attacked again. This attack was more successful, as the looser formation made it more difficult for the Irish men to inflict casualties rapidly. The outnumbered defenders were soon hard-pressed to defend the canal crossings, and the Royal Irish Fusiliers at the Nimy and Ghlin bridges only held on with piecemeal reinforcement and the exceptional bravery of two of the battalion machine-gunners.
To the right of the Royal Irish Fusiliers, the 4th Battalion, Middlesex Regiment, and the 1st Battalion, Gordon Highlanders, were equally hard-pressed by the German assault on the salient. Greatly outnumbered, both battalions suffered heavy casualties but with the addition of reinforcements from the Royal Irish Regiment, from the divisional reserve and fire support from the divisional artillery, they managed to hold the bridges. 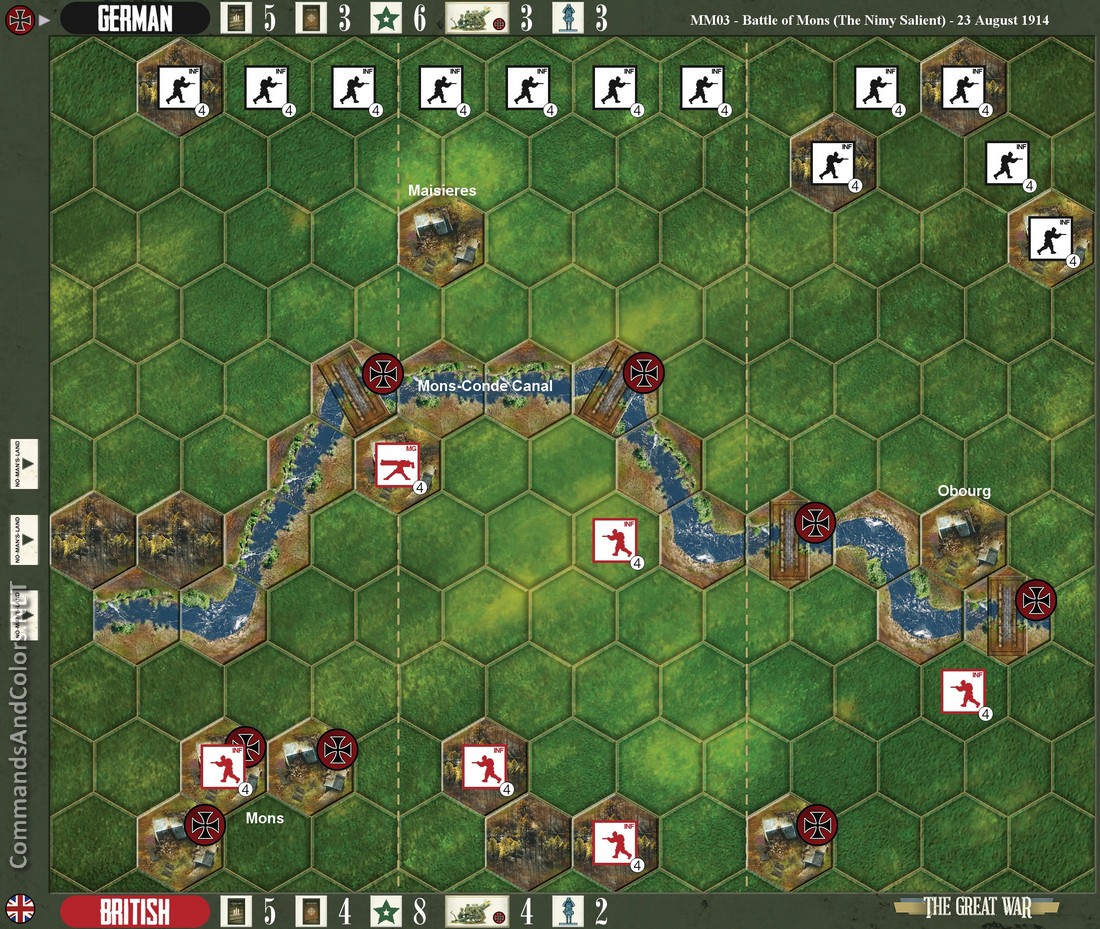 Discuss this article
Log in to comment
Posts in discussion: MM03 - Battle of Mons (The Nimy Salient) - 23 August 1914

Achtung Panzer replied the topic: #782 3 years 4 months ago
Thanks for the .pdf Mark

Erik Uitdebroeck replied the topic: #780 3 years 4 months ago
Thank you very much.

mk20336 replied the topic: #777 3 years 4 months ago
Maybe not the best solution but try clicking "print" (below OPTIONAL rules) and limit print to pdf to two pages.
You would get something like this:

Erik Uitdebroeck replied the topic: #776 3 years 5 months ago
Hello everybody,

Is there a way to print these scenarios? Then I can put them in a map or in my box. If I press the "PRINT" button, my printer gives me three landscape-pages, but the map itself is too big to fit on one page.

Or maybe a tool to export them to pdf?

mk20336 replied the topic: #772 3 years 6 months ago
Played it with Mark in "alfa" version. Adding special personnel makes that game very interesting and tense. The amount of Victory Banners is just right, allowing the Germans to survive with losses before getting behind river. Nice scenario - would be fun to play in tournament.
Read More...