The 8th and 34th British Divisions objective was the town of La Boisselle. The 8th Division attacked from the north, up Mash valley between Ovillers and La Boisselle, while the 34th Division moved up Sausage valley and flanked La Boisselle from the south. Two large mines were set off to open a gap in the German defenses, but the mines, and the week long British bombardment preceding the attack, had little effect on the Germans. As soon as the bombardment lifted, the Germans returned to trenches and the British advance meet with disaster, as most of the land they were crossing provided little cover. Some of the German trenches were gained, but the town of La Boisselle was still under German control at the end of the day. 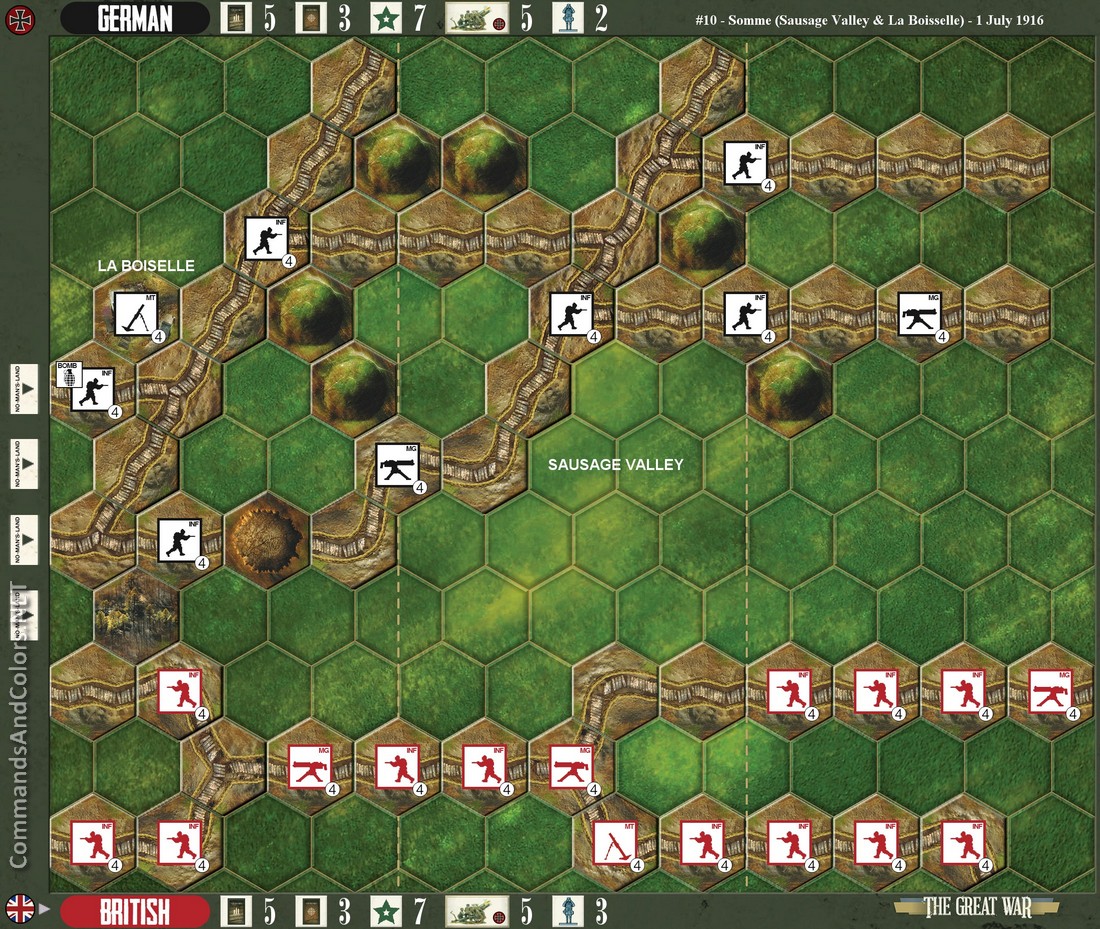 Added by the French expansion, they were retrofitted to the earlier scenarios.

Predo replied the topic: #914 2 years 7 months ago
Bit of a newb so could you tell me what the symbol of the blue fella with binoculars relates to. 3 for the British & 2 for the Germans. I've only played TGW centenary with no expansions.

alecrespi replied the topic: #662 4 years 9 months ago
Played some days ago with a friend of mine (I played Brit side).
The initial No-Man's-Land helped a lot adding a lot of craters and providing defensive bonuses.
Brits decided to advance on right side while Germans fired with reserve artillery and fortified their right side (city).
British advance on left side ended in a disaster so British troops decided to suffer some flags to run back on their own trenches.
British managed to kill 2 German units on center section.
Partial result: German 3 - British 2

Gemrans fortified around the city of "La Boisselle" and British advanced on the mine crater (1 VP)
Partial result: German 3 - British 4

British decided to get maximum result using the breakthrough rule, so advanced with a single unit and played a "Rush & Rotation" card to let 4 units reach German baseline.
During the next turns British let a couple units break through getting 2 + 2 VPs. 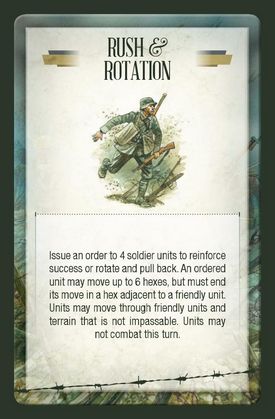 I do believe that combining "Rush and Rotation" card with "Break Through" rules has been a great help. Adding the lack of German units... it has been unstoppable.
Nice play, at least on British side.
Will go to next scenario next.
Ale

tantalon replied the topic: #230 6 years 5 months ago
Good coverage on No-Man's-Land shelling is very important for the Brits in this scenario.

Mark McG replied the topic: #228 6 years 5 months ago
interesting scenario, with no Wire, but considerable distances to cross on right flank.
Read More...