Please report in the discussion below in the form

congrats to Justin on a undefeated run!

toganalper replied the topic: #1186 3 months 4 days ago
We can also go back the first scenarios and may be we get some new players

Clexton27 replied the topic: #1185 3 months 4 days ago
I think that would be a good start Mark

toganalper wrote: When are we playiıng the next mini tournament in the Great War ??

I'd be willing to run one, but there isn't any fresh content.
We could return to the Somme scenarios using the Specialist Personnel?

open to other ideas

toganalper replied the topic: #1183 3 months 3 weeks ago
Congrats to gotigerssc, for a tournament , very very well played. Without losing a single banner in the whole tournament !!!! When are we playiıng the next mini tournament in the Great War ??

Congrats also on an undefeated run though the entire tournament! 8 victories in a row!!

Thanks! I believe the saying is that iron sharpens iron. Looking forward to the next one.

Mark McG replied the topic: #1156 1 year 3 months ago
Congrats also on an undefeated run though the entire tournament! 8 victories in a row!!

Clexton27 replied the topic: #1155 1 year 3 months ago
Congratulations to Justin on a well-played game. I can see I need to get some more experience and some more luck.

The French just kept pushing and pushing - eventually ending with a unit on each of the trench lines. Although, the third one did not count as a medal as it came on my final turn. I brought the tanks up early to help clear out the wire, and one bogged down and took a hit fairly quickly. Was planning to ditch it after failing a recover roll with 3 dice. Took one final chance on rolling 1 to recover and actually got the star. Tanks helped provide cover for my assault on the left, which is eventually what broke through to the third line. Lost a tank on that side that put the Germans up 4-2. Fighting then bounced to the center for a bit before shifting back to my left. On consecutive turns I was able to play Forward, Direct from HQ (7 units), and Infantry Assault to roll things up. Another thing that aided the push there was Short Supplying a field artillery.

Much more fun this game than the last one! Thanks again to Jim for a fun back and forth match.

8 1 speaks by itself. Worst unbalanced situation. Onto the second !

Hand size determined the outcome here. Jim had some good cards that were just not great for his situation - two Storm of Fire, for instance. I was adjacent to anything that could do real damage, which left him with long range shots on the SoF cards. The units that he could get up to my first trench line were promptly ganged up on and destroyed. Two of his tanks stayed bogged down for most of the match and I was able to take out one of those, and then a full strength tank that got sucked into my trench on the right side that suffered through never-ending fire. The other bogged down tank was down to 1 figure. Four French infantry units made it up to my first trench line and three of them were eliminated. The other was short supplied back to the baseline. In total, 9 of the 12 French infantry units were either still on the baseline or within 1 hex of it at the end of the game. I was also able to slip away injured units - my elites were both down to 1 figure. I claimed a time pressure medal early on.

Will schedule game 2 within the week.

toganalper replied the topic: #1150 1 year 3 months ago
I am also interested in an Epic event

mirkobruner replied the topic: #1148 1 year 3 months ago
Congratulations to the Americans!
Let us know when you play and we might join you. Cheers!

so the final between Jason and Clexton

The battle was a brutal, grueling, more than 3 hour affair stretching out over 2 days of play. The (4) card hand definitely hampered both sides, but especially Mirko who seemed to always have too many center cards with few units to order. I personally don't think that I have ever been in a game where so many Combat Cards were played. Mirko played his to good effect using LOST MESSENGER to stymie a German 2-2-2 attack. He also played MATA-HARI SPY to eliminate a German medal by discarding a RECON-1 and a COUNTERATTACK. He also played COMBAT CARD ESPIONAGE to steal a BUTT & BAYONET and a BOX BARRAGE. Clexton27 was struggling to get a medal near the onset but fortunately had a FIRST STRIKE against a French 1-fig unit to get his first medal. After the first hour the score was 3-1 with the French steadily moving up on the flanks. But when they stalled a German MACHINE GUN BARRAGE followed by an ARTILLERY BOMBARD managed to quickly eliminate 2 tanks and the score flipped to 5-3. Grinding attacks on the flanks continued and Mirko even got a Bomber unit in the German third trench for a temporary start turn medal, but alas, he was eliminated shortly after and with a final Recon-1 attack by the Germans on the French right the game was over. Cheers for Mirko for his persistence even when the tanks fell so quickly.

Part of the reason the game was so lengthy was that I lost internet connection two times with long delays before restarts. Also because of this I only have a log file for the last 30 minutes.

Looking forward to battling with Justin in the Finals. 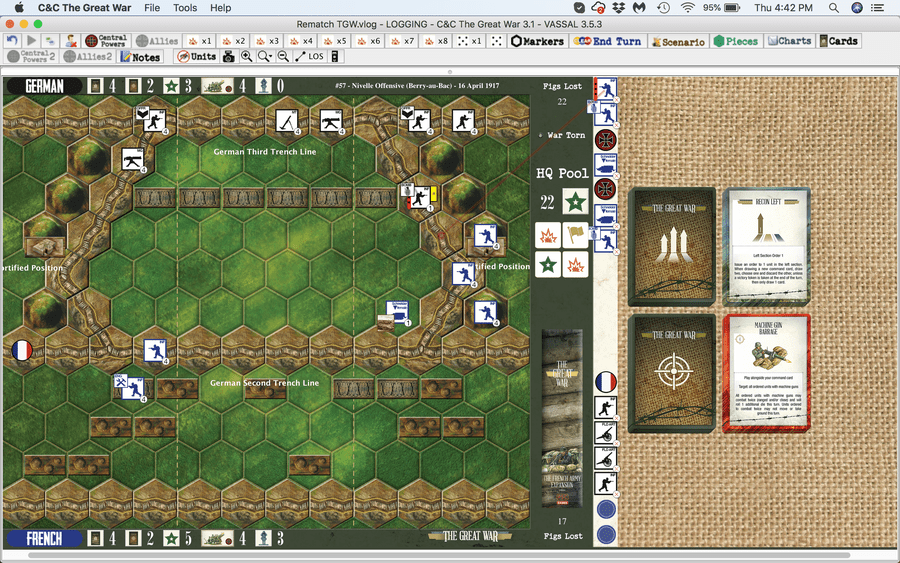 Clexton27 replied the topic: #1142 1 year 3 months ago
Mirko and I are playing the 2nd game of our match today. We should then be able to see who will play Justin in the finals.

mk20336 replied the topic: #1140 1 year 3 months ago
That is a very interesting idea. An EPIC TGW would be something refreshing. Having like couple of such scenarios, and seeing from the experience that such games in Tournament mode do not always play well, shall we try to do it live?

Mark McG replied the topic: #1139 1 year 3 months ago
I have an interest in playing 2 board scenarios, Sausage and Mash, and I think the Malmaisson scenarios may join together as well.
Does that interest anyone else?

mk20336 replied the topic: #1138 1 year 3 months ago
We have probably played so far all base game, Exp1 and Exp2 scenarios...
There are KS specials (Battle of Malmaison, scenarios 259-263) which I did not played yet but other than that nothing comes to mind.

Mark McG replied the topic: #1137 1 year 3 months ago
1 Semi-Final and then 2 final matches to be completed.

I'm uninspired at the moment. Has anyone got a thought on a theme or a scenario collection they would like to try?

toganalper replied the topic: #1136 1 year 3 months ago
Seems like this one is coming to a close, any plan for a new TGW tournament, this plays quite fast.

My cards were exceptional in this game despite having any for my left flank. At the beginning it felt like I was always ordering at least 4 units per turn. The French started by trying to advance infantry as quickly as possible. Germans held their positions and took opportunistic shots where they were presented. French counter-attacked a Storm of Fire and the tanks did five damage across three units. I eventually brought my tanks in to CC with trench units (1 of them bogged down). Did not have the greatest success with my attacks but by the middle of the game I had built up 13 HQ tokens. Was able to play Direct from HQ to order 6 units and push again. An Infantry Assault + Three on a Match helped me eliminate one unit and then push the fld art out of its fortified position and onto open ground. Felt like the turning point in the game. Despite only having 1 figure remaining it was never defeated. Mostly because I had run out of left section cards.

Heading into our final turns it was tied 5-5. If the Germans are able to take out the bogged down tank they will win the match. I had to sweat through it but none of the confirm rolls hit. On my last turn I got a medal for the trench and used my tank on that trench to take out a two figure MG unit in CC for the win - by rolling two flags of all things. Two of my medals were claimed on Butt &Bayonet cards from one figure units that were swiftly eliminated by the Germans in subsequent action. Two of my other medals came from the second and third trench line, respectively. Two of Michal's medals came from time pressure.

Always a tense and close battle when facing off against Michal. Looking forward to the next one against him!