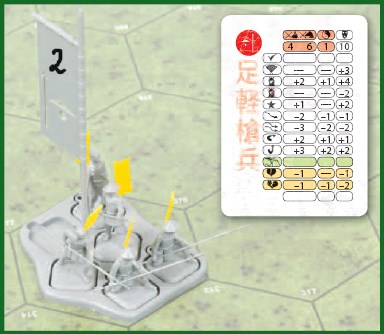 Before we get into the details of how to play, let’s take a look at the units you will command in the battle.
Every unit is represented on the game board by a group of models set into a base so they are easy to move around. Each unit has a matching Unit Card that shows all of the unit’s abilities as well as the orders you may assign to it.

Every unit has a Unit Flag that shows the symbol for this unit type (Ashigaru, Samurai, Monks, etc.), the type of armament (naginatas, bows, arquebus, etc.), and experience level (experience level will be used in a future expansion release).
Each unit’s fl ag and Unit Card must be marked with the same number, so it is always clear which card belongs to which unit on the game board.

The front side of a Unit Card lists all of the unit’s characteristics. In the Basic Game, you only use the abilities in the orange boxes.

A unit can be one of many diff erent types, and can be identifi ed by the symbol on the Unit Card and atching Unit Flag:

Ashigaru were the common soldiers of Japanese armies. Though not as well trained as Samurai, Ashigaru armed with yari (spears) were much more numerous—in fact, they formed the backbone of Japanese armies in the XVI and XVII Centuries.

The Arquebus was introduced to Japan by Portuguese traders in the middle of the XVI Century. Easier to master than the bow, the arquebus soon became popular with Ashigaru soldiers.

Samurai were trained to use a plethora of melee weapons, and would often use a polearm called the naginata. This versatile weapon could be used in massed formations as well as in single combat.

The bow was traditionally regarded as a weapon of the Samurai. Eventually, however, Ashigaru began using them too. Through their superiority in numbers, Ashigaru archers could achieve adequate results.

Japanese generals were Samurai from the noble families, and were as pro cient in ghting as they were at commanding an army. Surrounded by his elite loyal bodyguards, the general could change the course of a battle.

Only units armed with ranged weapons, such as mounted archers or arquebusiers have this ability.
A unit’s Firepower Value is determined by the range of the attack. The chart on the Unit Card shows different Firepower Values for each range that unit can hit. If a space on the chart is marked with an “x”, the unit may not attack an enemy at that range.

A unit’s Attack Values determine how likely the unit is to hit an enemy when it attacks. You must roll the number shown or less on a die to score a hit (see Melee Combat).

Example: This unit has an Attack Value Against Infantry of 4. When it attacks, any die roll of 1-4 is counted as a hit, while any result of 5-20 is a miss. 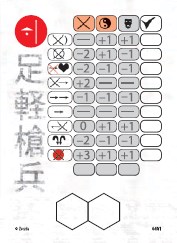 The back side of the Unit Card shows a chart which lists all of the orders that you may assign to that unit. You cannot issue any orders to a unit that are not listed on its Order Chart!

During the Planning Phase, place a mark in the right hand column for the order you wish to issue to each unit. If you issue Fire Ranged Weapons or Assault orders, write the number of the target enemy unit in this box.
Below the Order Chart is a series of hexes. When you issue a movement order to a unit, you must write down the hex numbers that the unit will move through that turn.