Ranged combat occurs when a unit with the Firepower ability (a “ranged unit”) attacks an enemy unit from a distance.

A unit can only make a ranged attack against an enemy that it can see. Where a unit can see is called “Line of Sight”. Some types of terrain and most units on the battlefi eld block Line of Sight.
To determine if a unit has Line of Sight to an enemy unit, draw an imaginary straight line from the center of the attacker’s hex to the center of the target’s hex. It is recommended that you use a piece of string or similar object stretched between the centers of the two hexes to help determine if a unit can see the target. If any part of this imaginary line crosses any part of a hex that is occupied by a terrain type or a unit that blocks Line of Sight, the attacker  cannot see the target and cannot make a ranged attack.

Important: All units except Ninja units block Line of Sight. 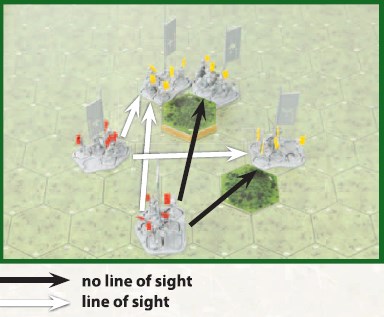 Example: The archers are at range 3 from the cavalry unit.

Every unit with a ranged attack has a range chart at the top of its Unit Card. The arrow symbol on the range chart shows the hex that the unit is in. Find the range to the target on the chart. The number in that box is the Firepower Value for the attack.
If the box for that range shows an “x”, your unit may not make a ranged attack against an enemy at that range.

Ranged attacks follow the same procedure as melee attacks, except that the attacker uses its Firepower Value instead of its Attack Value. When you  determine the final Firepower Value, remember to check the range chart on the attacker’s Unit Card.

While melee weapons such as swords and spears can be used for the entire battle, ranged weapons like bows or the arquebus require ammunition each time they are fi red. Every ranged unit (archers, mounted archers, arquebusiers, etc.) begins the game with a full supply of 7 Ammunition points.
Each time the unit executes an order that requires it to fire its weapons (such as Fire Ranged Weapons) it must spend 1 Ammunition point. If the unit has no Ammunition left, it cannot execute one of these orders.
The arrow models are used to record the amount of Ammunition a unit has. At the beginning of the battle, insert 7 arrows into the unit’s stand. Each time an Ammunition point is used, remove 1 arrow. 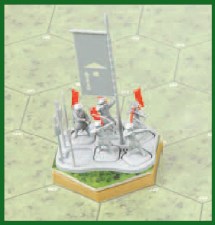 A ranged unit can get more Ammunition from a Peasant Transport by executing the Receive Supplies Order (see Orders).
Note that the Peasant Transport unit is not included in this Starter Set, but may be purchase separately.

Some orders, such as Defend or Ambush, will give a ranged unit a Kill Zone. This is the area of the battlefi eld that the unit can fi re it’s weapons at. The Kill Zone is a cone of hexes that begins at the front side of the unit, based on the direction it is facing,
and extends to the maximum range that it will fire (determined when you issue the order to the unit).
A unit with a Kill Zone will automatically attack any enemy unit that enters this part of the battlefield, interrupting that unit’s movement. 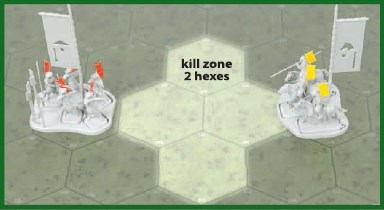