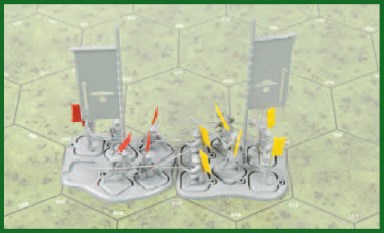 If a unit moves into an enemy’s Zone of Control or Defense Zone, it must immediately stop moving and engage that enemy. Point the moving unit so it is facing the enemy unit.
If a unit is attacked by two or more enemy units at the same time, it must turn to face the enemy unit that has the highest total Attack Value (multiply each unit’s current Attack Value by the number of fi gures in the unit).

Example: The defending unit 1 must turn to face attacking unit 3, since it has a higher total Attack Value (40) than unit 2 (24). 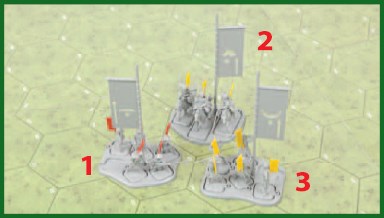 Exception: If a unit moves to attack an enemy that is already engaged in melee with another unit, that defender does not turn to face the strongest attacker.
Instead, it remains engaged with the current enemy, for as long as both units are still involved in the melee fighting. 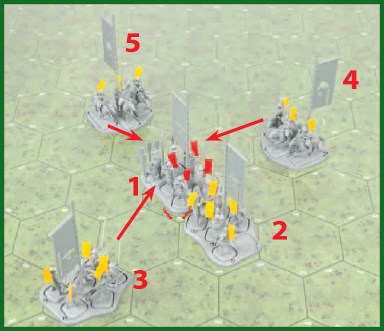 Teaming Up: Units 1 and Unit 2 are engaged in melee at the beginning of the turn. Unit 3 joins the attack on Unit 1 from the front, but Unit 1 cannot turn to face this attack as long as Unit 2 is still engaged.
Unit 4 is making a fl ank attack against Unit 1, and Unit 5 is attacking the rear.

A unit engaged in melee can only be given one order:
Retreat. If the unit was not ordered to Retreat, it gets to make an attack during the Melee Combat step of the Execution Phase. Each unit can make 1 melee attack each turn, against the enemy that it is facing. These attacks take place simultaneously.
To make a melee attack, you must follow these steps:
1. Determine Attack Value: The unit’s Attack Value is based on the type of unit you are attacking (infantry or cavalry). Add or subtract all modifi ers to determine your fi nal Attack Value.
2. Roll Attack Dice: Each model in the unit rolls dice when you attack. All infantry units roll 1 die for each model (including any Commander). Cavalry units roll the number of dice listed on the Unit Card for each model (including any commander).
3. Count Hits: The number rolled on each die is compared to the fi nal Attack Value. If the die roll is equal to or less than the Attack Value, you score a hit! If the roll is higher, it missed. Add up the total number of dice that rolled hits.
4. Apply Damage: Each die that rolled a hit in step 3 inflicts 1 damage to the target unit. Damage is applied to the target’s Defense Value fi rst. Each hit reduces the Defense Value by 1 point. If the Defense Value is reduced to 0, each hit that remains infl icts 1 casualty.
Remove 1 model from the unit for each casualty inflicted.

Units are trained to fi ght facing their enemy, where their weapons and formations are most eff ective. But, if a unit is engaged in melee, it cannot turn to face other foes that attack from the sides or rear where it is more vulnerable to attack.
When a unit is engaged, the model must be turned to face the enemy unit. This is called the unit’s “front” side.
The sides of the unit are called “flanks” and the side opposite the front is the “rear” (see the illustration). 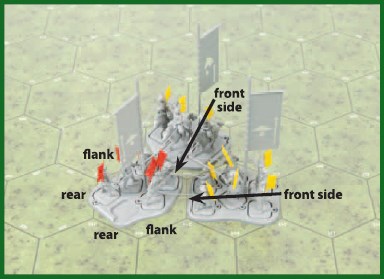 A unit can keep 2 enemy units in its front side if they are in adjacent hexes. If the second attacking unit is not in an adjacent hex, it can attack the fl anks or rear of the defending unit. So, you can use one unit to engage an enemy, then assault the defender through the flank or rear sides to gain the benefi t of a fl ank or rear attack.
Important: If your unit enters an enemy’s flank or rear hex when executing a March or Run order (instead of the Assault order), your unit must engage in melee combat with the defender but it is not a flank or rear attack! Only units with Assault orders can benefit from these bonuses.