Declared a traitor by imperial decree and hunted by his brother, the shogun Yoritomo, Minamoto no Yoshitsune spent the first years after the Genpei War on the run across Japan, accompanied by a few loyal retainers. He eventually found refuge in the northern province of Mutsu with his childhood guardian, Fujiwara no Hidehira. When Hidehira died in 1188, his son Yasuhira came under increasing pressure from Yoritomo to betray the oath made by his father to protect Yoshitsune. In June, 1189, Yasuhira eventually bowed to Yoritomo’s directive and attacked Yoshitsune in the Takadachi mansion above the Koromo River. Yoshitsune prepared for death, reciting sutras while his dozen remaining retainers mounted an heroic defense against overwhelming odds. Chief among these was Yoshitsune’s oldest and most faithful companion, the monk Benkei, who held the bridge across the river and famously remained standing even after death, confusing the attackers who were afraid to approach him. Yoshitsune committed seppuku and a retainer killed his wife and two children. So died the hero of the Genpei War and one of the most famous samurai in Japanese history.
The stage is set, the battle lines are drawn, and you are in command. The rest is history. 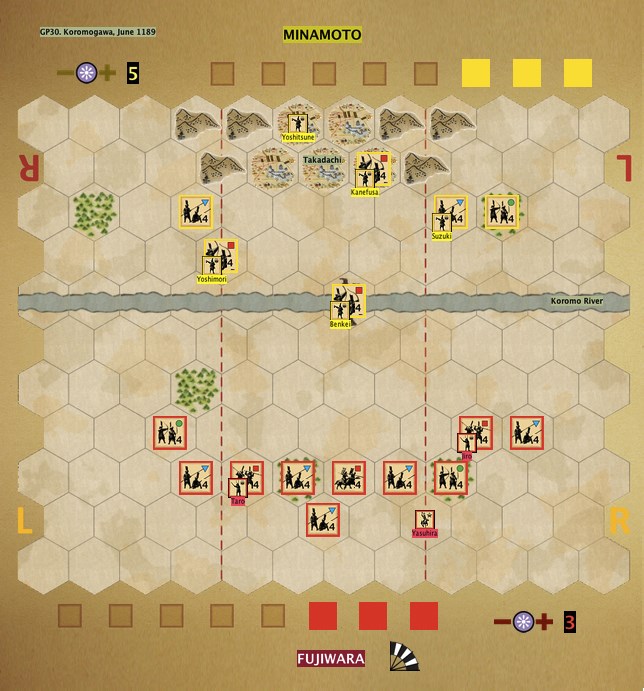