Despite early success for the Taira, two events late in the day turned the battle against them. First, the strong tide in the Shimonoseki Strait reversed, now favouring the Minamoto and allowing them to bring their superior numbers to bear. Second, an important Taira vassal, Taguchi Shigeyoshi, defected to the Minamoto and revealed to them the position of the imperial barge, which the Taira had disguised as a common vessel. Following Shigeyoshi’s betrayal, more and more Taira allies began defecting to the enemy. The Minamoto concentrated their attacks on the imperial barge in an attempt to capture the Emperor Antoku and secure the sacred regalia.
With these changes in fortune, the Taira knew that they were defeated. Many committed suicide by leaping into the sea and drowning. Among these were Lady Nii, widow of Kiyomori, who took her grandson, the eight year old Emperor Antoku, in her arms and plunged beneath the waves. Some Taira samurai died fighting, including Noritsune who sought to kill Yoshitsune but was foiled in his pursuit of vengeance by a legendary leap made by the young Minamoto general to another boat. The head of the Taira clan, Munemori, dithered while his family were finding honourable deaths around him, and was captured. The Taira attempted to take the sacred regalia with them to the bottom of the sea, denying them to the enemy. The Minamoto were able to retrieve the jewel and mirror but the sacred sword, Kusanagi, was lost forever to the depths.
By sunset, the battle of Dan-no-Ura was over. The Taira clan, the dominant political and military force in Japan for over two decades, was destroyed. The Genpei War ended and with it the classical Heian period. The Minamoto were the victors and established a system of political control by the military elite that would dominate Japan for the next seven centuries.
The stage is set, the battle lines are drawn, and you are in command. The rest is history. 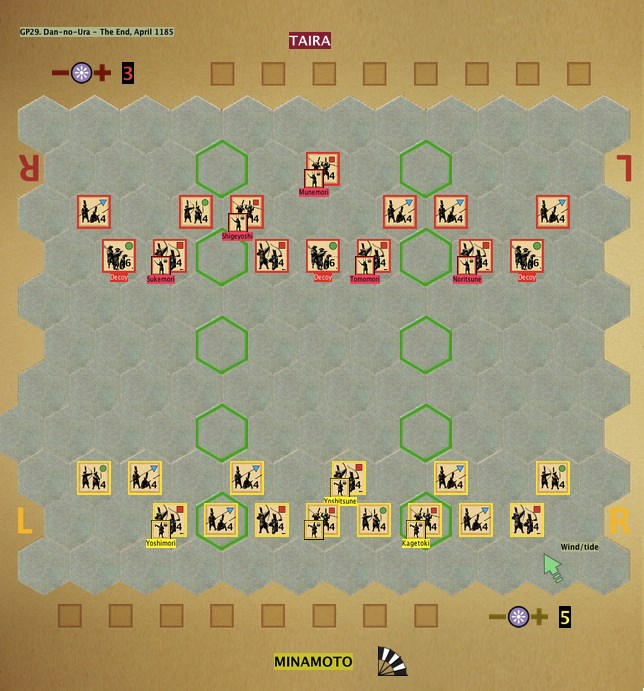