Yoshitsune’s small cavalry force made the two day journey across Shikoku to the Taira capital in exile at Yashima. Yashima was an island separated from the shore by a strait that was easily fordable. The Minamoto set fire to the village of Takamatsu on the near shore and then charged across the strait to Yashima. The Taira panicked, believing that they faced an invasion by a full army. They abandoned their palace and took to their boats with their families and the emperor Antoku.
The Minamoto set fire to the palace and formed up on the beach. Realising too late that they had been tricked into fleeing from a small cavalry squadron, Taira no Munemori ordered his samurai to retake the island. By sustained arrow fire, amphibious assaults and personal duels, the Taira attempted to drive the Minamoto from the beach. Bands of defectors came in from the local area to swell the Minamoto ranks until they numbered three hundred and the Taira were unable to establish a sustained bridgehead.
Late in the day, the Taira rowed a boat off the Minamoto position, bearing a beautiful maiden holding aloft a red fan painted with a setting sun, daring the enemy to hit it at extreme arrow range. Yoshitsune’s most talented archer, Nasu no Yoichi, struck and destroyed the fan with a single humming bulb, a miraculous shot that earned the admiration of both sides.
Night fell and the Taira had been unable to retake Yashima. Having originallylanded on Shikoku with only fifty men, Yoshitsune had now driven the Taira from their last home. The Taira and the child emperor Antoku were cast adrift on Japan’s inner sea with no port of refuge.
The stage is set, the battle lines are drawn, and you are in command. The rest is history. 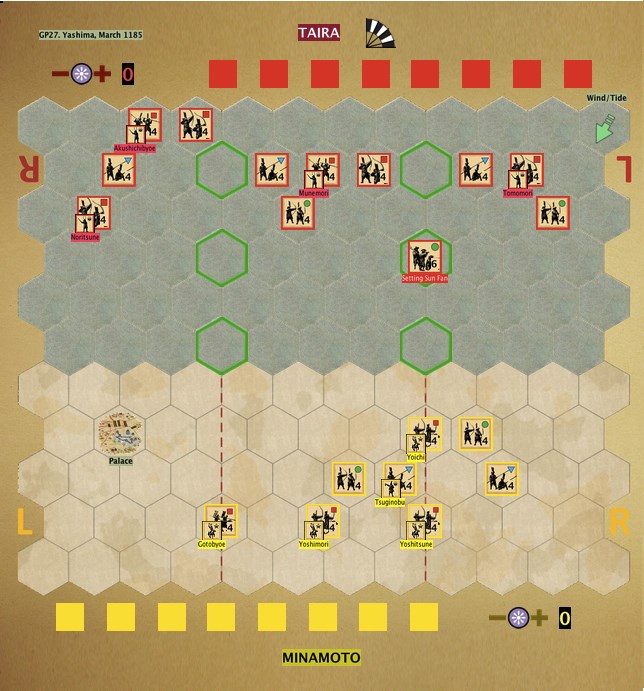