In spring of 1185 the Minamoto were ready to make the final assault against the Taira. Yoshitsune received imperial sanction from retired emperor Go-Shirakawa and marched to Watanabe on the coast of the inland sea, where his army gathered a fleet of boats. On the eve of their intended departure a gale rose, blowing in the direction of Shikoku. In order to take advantage of the following wind, Yoshitsune ordered the fleet to embark, but after a heated argument with his senior commander Kajiwara Kagetoki, and with most of the boat crews unwilling to brave the tempest, only Yoshitsune and five boats carrying his closest retainers launched. They weathered the storm and landed before dawn at the eastern end of Shikoku, two days’ ride from Yashima.
They immediately met a Taira patrol of local samurai who Yoshitsune convinced to defect to his service. These new allies informed him that a garrison of Taira loyalists were encamped nearby, led by Sakuraba no Suke Yoshito. Not wanting to leave a dangerous enemy in his rear, Yoshitsune’s small force made a surprise attack on Yoshito’s redoubt. The redoubt was a natural defensive position, surrounded on three sides by marsh and fronted by a deep fosse. Yoshitsune’s cavalry braved heavy arrow fire to cross the fosse. Yoshito fled on horseback. Yoshitsune captured twenty of Yoshito’s archers and offered their heads to the god of war.
The stage is set, the battle lines are drawn, and you are in command. The rest is history. 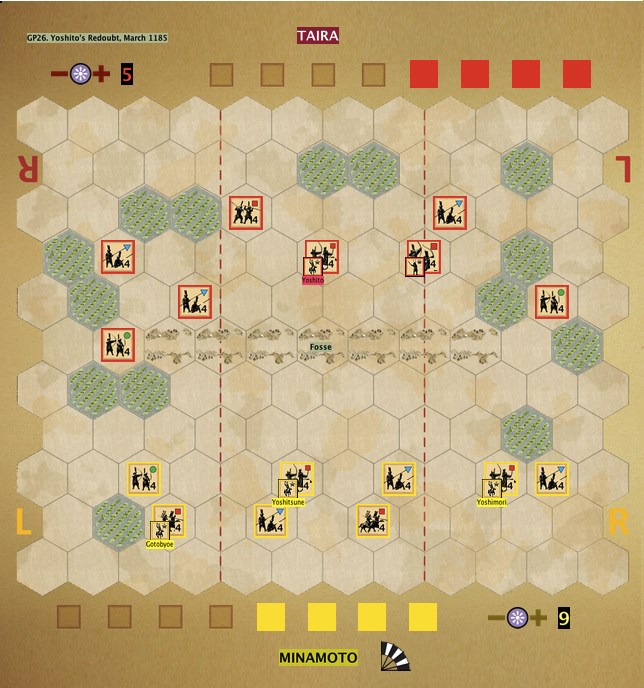