Six months after their victory at Ichi-no-Tani, Minamoto no Yoritomo finally sent his brother Noriyori west with a force of 30,000 men to suppress Taira allies in the Chigoku provinces of western Honshu, and then Kyushu. A fleet of 500 Taira boats, under the command of the sons of Shigemori, left Yashima and landed at Kojima Island, off Bizen. Learning of this, Noriyori marched his army to occupy the shore opposite Kojima. The Fujito Strait separating Kojima from the mainland was 500 yards wide and the Minamoto had no boats to cross. Safely out of reach, the Taira put to sea daily in their own boats to taunt them.
A Minamoto samurai named Sasaki no Saburo Moritsuna bribed a local fisherman to reveal to him that there were hidden shallows which could be forded to the island. When the Taira next put out in their boats he plunged into the shallows with his retainers against the orders of his commanders. When the Minamoto realised that Sasaki had discovered a ford, the whole army followed him. The panicked Taira sent their entire fleet against them but were unable to prevent the Minamoto forcing the crossing. The Taira retreated back to Yashima. The Minamoto were victorious but without boats,Noriyori was unable to pursue them and consolidate his victory.
The stage is set, the battle lines are drawn, and you are in command. The rest is history. 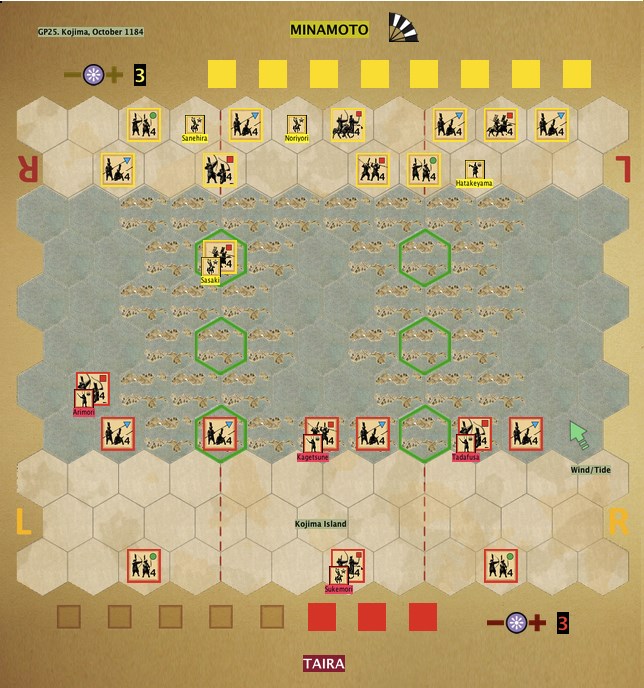 Victory
5 Banners for the Taira
The Minamoto do not gain Victory Banners for destroying enemy units or leaders.
The Minamoto army wins an automatic victory if it begins its turn with at least 2 units on the Kojima Island land hexes on the Taira side of the board.

Mark McG replied the topic: #640 3 years 1 month ago
This is quite an exciting scenario, ships vs wading troops.
The only quibble I have with this scenario is the Victory Conditions, in that the all or nothing Minamoto victory doesn't allow much comparability.
If I was setting the VC, I'd give one Temporary Victory Banner for each Minamoto unit that starts the turn on Kojima Island, plus one banner per Taira unit eliminated (as usual).
Read More...