In response to retired emperor Go-Shirakawa’s plea for help, Minamoto no Yoritomo sent a large army from the Kanto to oust his cousin Yoshinaka from the capital. Vastly outnumbered, Yoshinaka’s only hope was to block the river crossings at Seta and Uji. Yoritomo’s army divided into two divisions, commanded by his brothers, the main force under Noriyori attacking Seta and a smaller one under Yoshitsune making for Uji.
At Uji, Yoshitsune found the river in spate with early spring snow melt, the bridge dismantled, the riverbed obstructed with stake, rope and abatis barriers, and a small but determined force of defenders on the far bank. Under arrow fire Yoshitsune’s men cut their way through the obstacles, forded the flood waters and drove off the defenders. Yoshinaka was outflanked.
The stage is set, the battle lines are drawn, and you are in command. The rest is history. 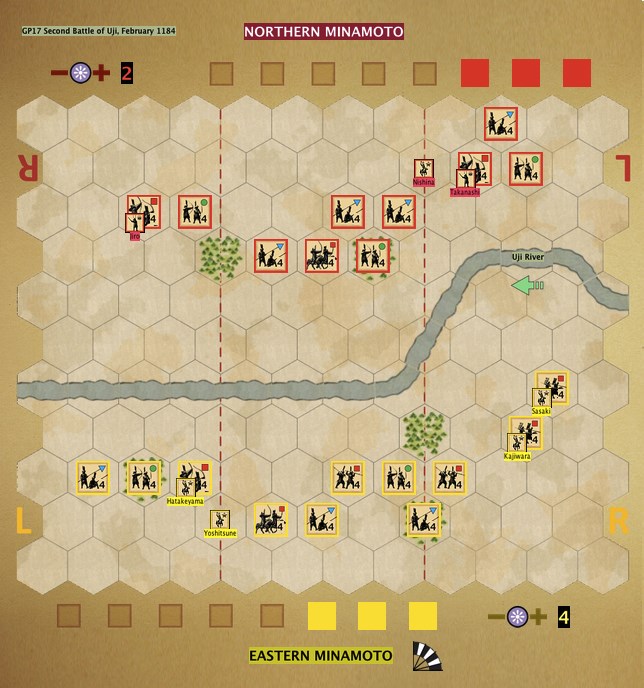 Victory
5 Banners
1 Victory Banner for each Leader or Unit eliminated.
The Yellow army may not win unless they have 2 units on the Red side of the river at the same time as they have 5 Victory Banners.
(See the Snow Melt Special Rule)