Closely monitoring the Taira advance into Etchu province, Minamoto no Yoshinaka determined that they would cross the mountains through the pass below Mount Tonami. Knowing that his army was outnumbered, Yoshinaka did not want to face the Taira in the plains beyond and devised a plan to defeat them at the pass.
As the Taira army climbed Tonami, Yoshinaka had thirty white Minamoto banners set up on the summit of Kurosaka, a peak overlooking the pass ahead of the Taira advance. Taira no Koremori fell for the ruse, believing the banners represented the vanguard of a much larger Minamoto force, and halted his troops on Tonami. All the following day the Minamoto sent out samurai singly and in small groups to issue ritualised challenges of honourable combat with bow and sword, which the unsuspecting Taira accepted. Meanwhile, Yoshinaka divided his army into several divisions which moved secretly through the mountains into positions flanking and behind the Taira.
As dusk fell, the Minamoto attacked from all directions, driving the panicked Taira down the only path Yoshinaka had left open to them, a steep, rocky gorge below Tonami named Kurikara. Their panic was increased by a herd of oxen with flaming pitch torches tied to their horns and stampeded by the Minamoto into the gorge. Crowded into the treacherous ravine, trampling each other in their terror and not knowing which way to flee, the Taira were massacred.
Kurikara Gorge was Yoshinaka’s greatest victory and the turning point of the Genpei War.
The stage is set, the battle lines are drawn, and you are in command. The rest is history. 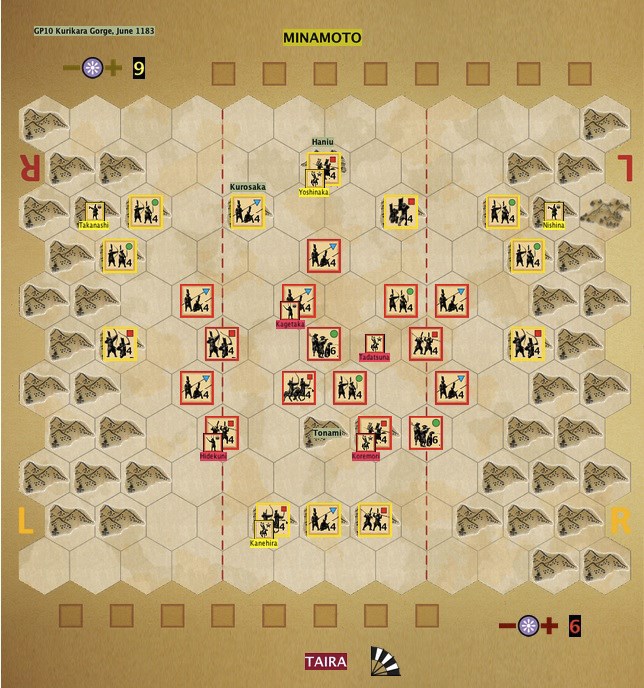