Following the destruction of Miidera, Taira no Kiyomori decided to deal with the temples of Nara, which had attempted to support Prince Mochihito’s rebellion. Proceeding more delicately this time, he sent ambassadors who were threatened and rebuffed, then a detachment of unarmed samurai with orders not to initiate violence. The monks executed sixty of the Taira samurai and displayed their heads around the Sarusawa Pond. Enraged, Kiyomori ordered an attack in force, led once again by his son, Shigehira.
The monks entrenched across the Kyoto road with two lines of ditch, shields and abatis. In extended fighting around these defense works most of the monks were killed. With a blustering wind rising, Shigehira ordered the residence of a temple official to be fired. The flames quickly spread downwind to the other temple buildings and the whole precinct was soon ablaze. Among important buildings destroyed were the two great temples of Kofoku-ji and Todai-ji. In the Todai-ji the heat was so intense that the great buddha melted and thousands of people who had taken refuge from the fighting in its rafters, among them women and children, were immolated.
With the burning of Nara, the Taira had firmly established their control over the capital, but at a terrible cost.
The stage is set, the battle lines are drawn, and you are in command. The rest is history. 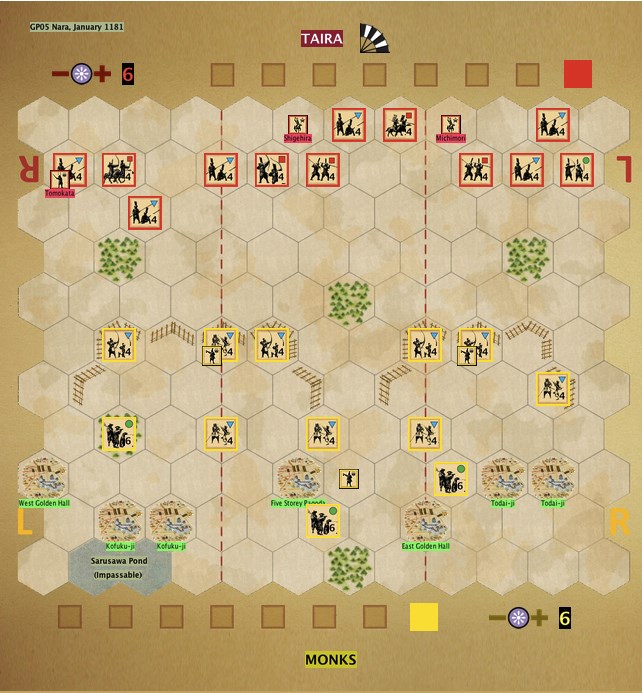