Prince Mochihito had sent a proclamation to the Minamoto in the provinces to raise forces and join his rebellion. Minamoto no Yoritomo summoned the few adherents with the courage to join him and attacked and killed the Taira governor of Izu province. Taira no Kiyomori responded by sending Oba Kagechika, a veteran of Uji, to Izu with orders to kill Yoritomo. Learning of this and the defeat at Uji, Yoritomo was forced to attempt an escape out of the Izu Peninsula through the Hakone Pass with only three hundred men.
Outnumbering Yoritomo’s small force ten to one and keen to execute his orders, Kagechika attacked the Minamoto in the heavily wooded pass at night in the middle of a thunderstorm. The Minamoto were quickly overwhelmed but in the rain and blowing gale, Yoritomo escaped into the forests with only six surviving companions. After several days eluding his hunters and aided by Minamoto partisans, he made it to the coast, from where he sailed to the Kanto. He established a base at Kamakura and began to raise an army.
The stage is set, the battle lines are drawn, and you are in command. The rest is history. 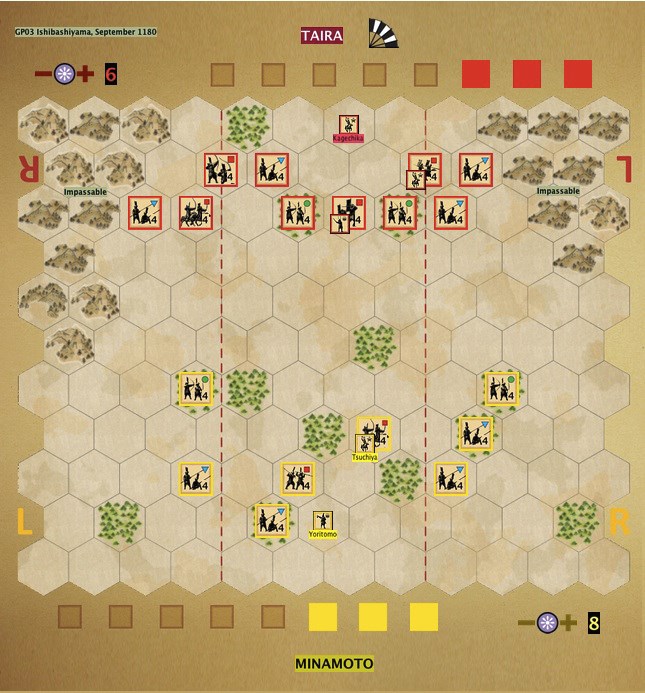 Victory
5 Banners
1 Victory Banner for each Leader or Unit eliminated.
The Taira win an immediate victory if Yoritomo is killed.