Disgusted by the tyrannous behaviour of the Taira, the senior Minamoto in the capital, Yorimasa, secretly convinced Prince Mochihito, the second son of retired emperor Go-Shirakawa, to rise from obscurity and lead a rebellion to claim his birthright and the throne. Gathering Minamoto loyalists the two slipped out of the capital to the temple of Miidera and enlisted the monks there to join their cause. From there they petitioned the monks of Mt Hiei and Nara to join their rebellion. The Hiei temples refused, reputedly bribed by Taira no Kiyomori, but the Nara monks agreed.
Outnumbered by a large Taira army approaching Miidera, the mixed rebel force of Minamoto samurai and monks abandoned the temple and sped south toward their allies in Nara. In danger of being overtaken by the swiftly pursuing Taira, they stopped on the southern bank of the Uji River, by the Byodo-in, the great Phoenix Hall, and partially dismantled the bridge. When the Taira arrived they attempted to charge across the bridge but with most of the planking removed, hundreds of Taira soldiers fell into the river to drown.
Several monks moved out onto the beams of the dismantled bridge and challenged the Taira warriors, demonstrating astounding feats of martial prowess which at once impressed and enraged the Taira troops. Faced by an impassable bridge, a river in dangerous flood from recent rains and a desperate and defiant enemy on the opposite bank, the Taira commanders were at a loss how to proceed. Their dilemma was solved by a provincial retainer, Ashikaga no Matataro Tadatsuna, who swam the torrent with his cavalry, and charged the Byodo-in. Emboldened by his show of daring the rest of the Taira forces plunged into the river and although many were swept away, their numbers were so great that their bodies effectively dammed the current, allowing those downstream to charge across unimpeded.
The outnumbered rebels were overwhelmed. Defended by his sons, Yorimasa retired to the Byodo-in and committed seppuku. Prince Mochihito fled south toward the sanctuary of Nara with a small bodyguard of Sohei but was overtaken by Taira horsemen and killed. The force of Nara monks marching toward Uji to reinforce the rebels, only minutes from arriving in time, heard of the defeat and retreated back to Nara.
The first resistance to Taira power had been crushed but the spark of rebellion had been lit. The Genpei War had begun.
The stage is set, the battle lines are drawn, and you are in command. The rest is history. 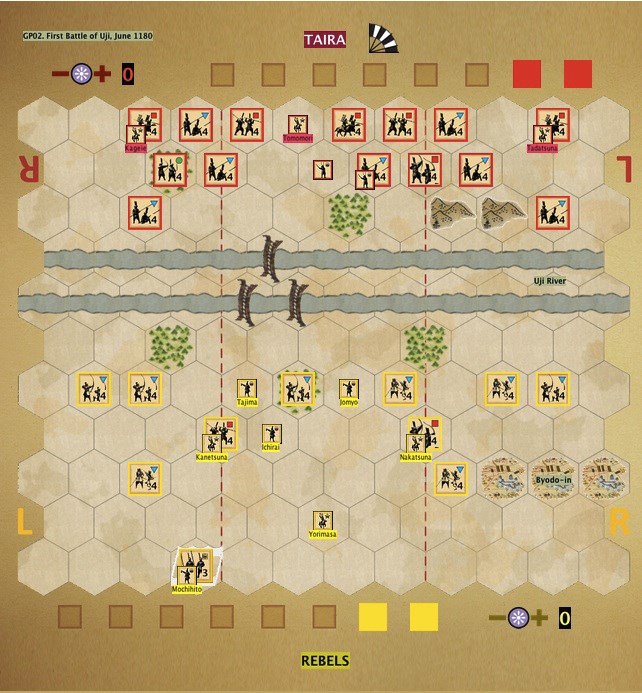 Discuss this article
Log in to comment
Posts in discussion: GP02 THE FIRST BATTLE OF UJI (June 1180)