HISTORY DETAILS
In June of 1560, Imagawa Yoshimoto assembled a large army with a dream of rising above a local daimyo to become shogunate of all Japan. All that stood in his path to Kyoto, Japan’s capital city, was an old rival, Oda Nobunaga.  Yoshimoto‘s first objective on the march was to secure the Oda controlled border forts. He ordered Motoyasu to attack Marune and after a sharp attack against the fort, Motoyasu retired to a prepared position. The fort’s garrison unwisely pursued the retiring forces and Motoyasu sprung his trap and the garrison force was destroyed and the fort captured. 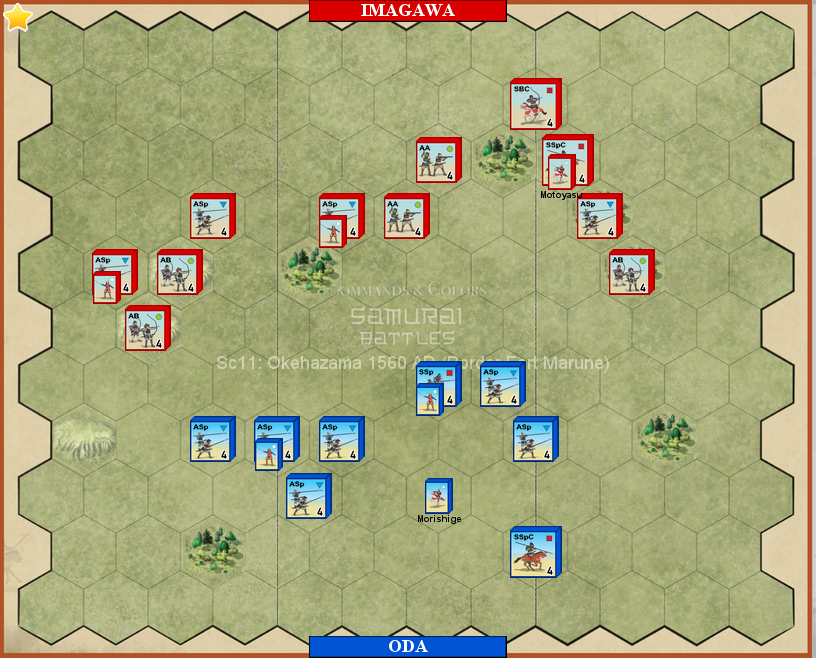 NightOwl3 replied the topic: #824 8 months 3 days ago
Another great battle with Judd that came down to the wire, even though it ended up 5-3. Imagawa sprang the trap with the perfect card: Hold and Shoot to get some early damage. Oda responded with aggressive moves forward to get in the face of the bowmen and gunners. A Cav charge card by Imagawa (RED) put pressure on Oda, but a misplaced choice of target allowed a forceful counter attack which delivered 3 hits on the Red Cav. Meanwhile on Imagawa's right he was able to break several of the spearmen and send the food leader running to the rear. But due to emergency issues in the center, Imagawa had to wait to follow up. In the center Oda threw everything he had to attack the two AA units. But even after repeated attacks some of five dice, the AA units did not break. In the end, the center attack stalled, and Imagawa was able to break a spearman on his right to win the game, 5-3. This was a fun scenario.
Read More...