HISTORY DETAILS
Having received a report that the Satomi force had captured Konodai Castle, Hojo Ujiyasu summoned his retainers and ordered the advance to Konodai. Although the Hojo army was more than double the strength of Satomi Yoshihiro's army, many men were lost in the initial fight as they attempted to cross the Ichikawa. But soon, by the sheer weight of numbers, the Hojo army was able to cross and gained the enemy flank. During the Satomi withdrawal Ota Sukemasa was wounded twice. The first day's action had gone somewhat well for the Hojo army.

The stage is set, the battle lines are drawn, and you are in command. Can you change history?
Note: There are varying accounts for this battle. Basically, the other version is that a Hojo advance force crossed the river, pursued the retreating Satomi troops into an ambush and retreated back across the river with loss. We chose to pursue a more evenly matched version for this scenario. 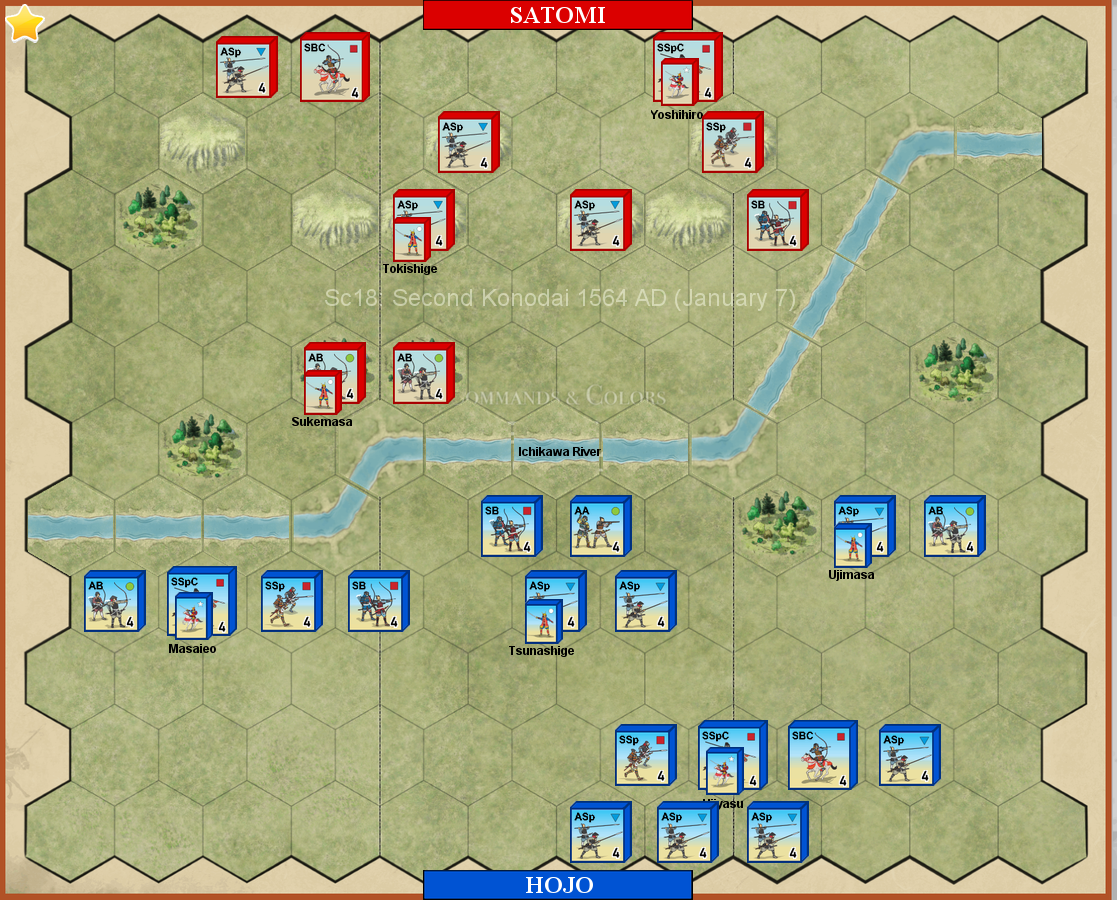 Judd and I got back into CCS while he was working on some updates to other modules we were playing. We jumped in here because he had played G17 with someone else. But we will come back to it at some point.

This was an interesting and thrilling game. The rule about one unit in each section did not get broken. I thought going in (it is my first time on this scenario) that it would be a big deal, but it was’t. The bigger issue is that Blue has 17 units to Red’s 10, though Red does have some mountains for protection.

I had some good dragon cards though, and tried to play a good defensive game. But I made some mistakes.

On the first turn I pulled my men on my right into a defensive line on the mountains. I was going to stay there if I could and use the bowmen to attack if possible any units stuck in the river.

However, Judd pulled a Blue Dragon card on my early in the game. We laugh about this card all the time, because for most scenarios it is useless. But this time, the river brought out the dragon. Judd got a hit on one of my troops. Soon after I played Shogun and we had to reshuffle the cards. On the next turn I pulled Blue Dragon. This was amazing because we both got to use this hard-to-play card. Judd was in the midst of his big push across the river and I got 3 hits out of about 9 rolls which was good.

Judd Had all this ducks in a row and kept his horse general behind his troops to gain the extra die roll if he wanted it. His was a huge advantage to him because I sent my horse general on a Mounted Charge and he was separated from his troops thus not able to help. Judd got a three banner advantage, and I really thought he would skunk me. However, did have a personal challenge card and used it to have a 9-6 advantage in the roll off. I only rolled one sword. I knew I was dead. But then Judd rolled no swords. Out of 15 dice rolled, only one sword. But it was enough. I got a leader, and his hand dropped to 5 to match mine.

Judd’s mounted troops had really cut me up, but I trapped one of his against my back line and played Cowards on him. Flag would be kills but I got him anyway. But Judd’s leader ran the gauntlet and lived. I just could not kill those leaders!

I eventually tied the game but had taken a lot of hits. I thought he would still win, but at least not skunk me. Judd made another big push in the middle with a Leadership card. Thankfully, I had a Counter Attack and played it to do a Hail Mary charge right into his gunners. They were the weakest unit and had a leader. I could kill this unit and the leader I would win. My first attack took out two of the blocks and most importantly Judd failed the leader check. Their battle back failed to connect, and my second unit attack finished them off for the win. I was a thrilling comeback. But I was thankful I got any banners at all. I learned a lesson to make sure I keep my horse leader near other units to use his special ability. Sometimes you have to take some long shots, and as I like to say to Judd: “Don’t tell me the odds!”
Great game Judd

Mark McG replied the topic: #890 3 months 1 week ago
Played this scenario twice, and frankly it seems pro-Blue. This is exacerbated by the clear section special rule which keeps the Red spread out.
Blue won
5-2 with one banner from the Special rule
5-0 (with 2 fortunate leader kills)

Red would have to be very fortunate to win this
Read More...