The "First Samurai Skirmish" is a non-historical scenario expressly designed to introduce you and a friend to the basics of Samurai warfare using the Commands & Colors rules.
This is the format that we will be using for the Commands & Colors scenarios. The scenario map shows where terrain, units, and leaders are positioned along with how the units and leaders for both armies are placed.In this Historical Background area, there normally will be a brief recap of the battle and other historical information. The scenario's battle notes detail the starting player, the number of Command cards, the number of Dragon cards, and the number of Honor & Fortune tokens each player receives at the start of the battle. The notes also detail the number of victory banners needed to gain victory and any special rules that apply to the battle.
Welcome to the age of Samurai Battles and enjoy!
Richard Borg 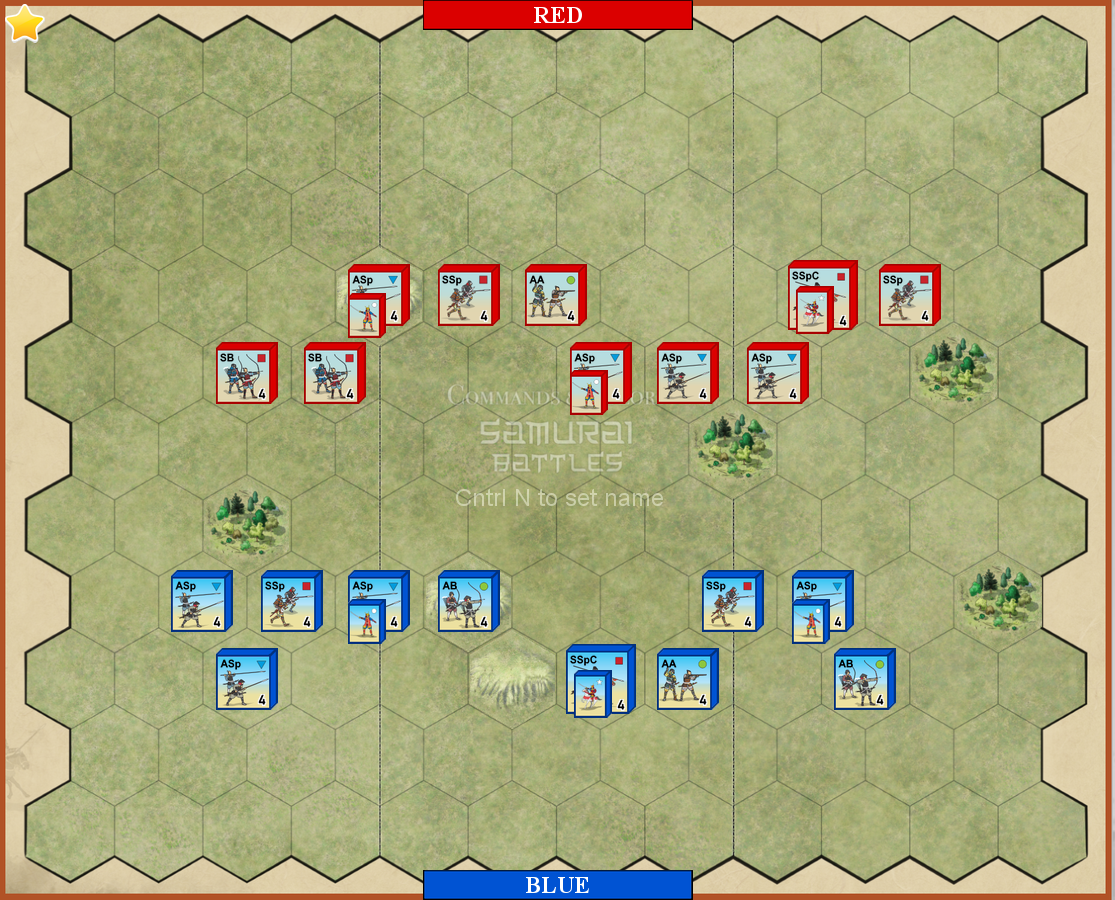 Pevans replied the topic: #813 7 months 1 week ago
Playing blue against nephew Tom's red, I attacked with the right-hand half of my army. In particular, launching my mounted samurai spearmen into Tom's ashigaru and killing their leader (1:0 to me). This quickly developed into a pitched battle as his mounted samurai spearmen hit my ashigaru in turn. Meanwhile a long-range archery duel centre-left saw my bowmen damaging his.

The right flank melee ended with me having lost three units - only the arquebusiers and archers left - while Tom had lost just one. Plus another leader - my cavalry leader committed seppuku rather than suffer disgrace. (3:3) Meanwhile the left half of my force had attacked, the samurai foot spearmen finishing off one unit of archers, but being badly battered in the process (the first sign that marching up to bowmen is costly). (4:3)

Tom eliminated that samurai unit to take the score to 4:4. However, he had several one- and two-block units just waiting to be finished off. My ashigaru (two of which were down to 2 blocks but still had leaders attached) pressed the attack on his one-block samurai unit and took it out for the win (5:4). This was a close battle that did its job of introducing us to the game and most of the different types of unit. It took about an hour to play. Given the two sides are essentially the same, we didn't replay this one.