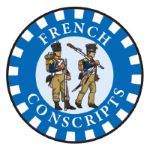 Read over and over again the campaigns of Alexander, Hannibal, Caesar, Gustavus, Turenne, Eugene and Frederic. ... This is the only way to become a great general and master the secrets of the art of war.~Napoleon