Written by alecrespi on 18 January 2012. Posted in Expansion 1

Each of the major powers that fought in the Wars of Napoleon will have a National Unit Reference Card. A National Unit Reference Card details:
• The unit types and map set up codes.
• Sticker art portraying each listed unit.
• The number of blocks that are deployed in a unit.
Note: Not all nations had the same organization therefore the number of blocks for a specific unit type may differ.
• The unit’s movement in hexes.
• Unit specific Battle Dice Modifications plus Command card Dice Modifications.
• Morale Modifications.
• National Notes.

Visual Identification Aids. To assist players in set-up and unit recognition, several unit class icons are being introduced into this expansion. They will be retrofitted into the core game upon reprinting and will be carried forward into future expansions:

Line and militia infantry, light cavalry (Light, Light Guard and Light Lancers) and foot artillery (Foot and Guard Foot) classes of units are differentiated by the absence of any identifying icon.

Each unit is composed of a certain number of blocks. The number of blocks in a unit may vary by unit type and Nation and is detailed on the National/Abbreviated Unit Reference Cards.
A General, Marshal or Field officer of any rank (hereafter referred to as a leader) is represented by one rectangular block. A single Leader block is not considered a unit.

Infantry in Square Track and Counters

The infantry in square track and the numbered counters are used to track infantry units that have formed square on the battlefield.

These counters track a player’s quest for victory.

When the scenario’s special rules state that Spanish Guerrilla Action Rule is in effect, the Spanish Commander may attempt to intercept the French player’s Command card on a turn by spending a Guerrilla Action counter. 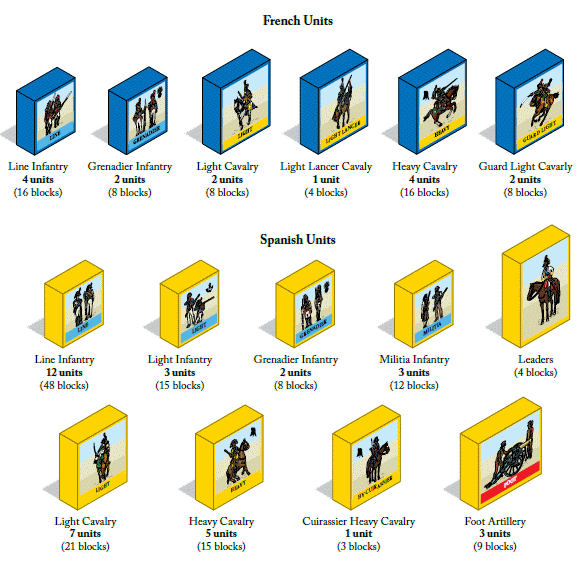 How many things apparently impossible have nevertheless been performed by resolute men who had no alternative but death.~Napoleon