Written by alecrespi on 11 January 2011. Posted in Base Game

The Terrain Tiles represent a wide range of terrain features and are placed on the battlefield to recreate the historical scenario.
Terrain rules are explained in detail in the Terrain rule section.

Units may only move or battle when given an order. Command cards are used to order your troops to move, battle, or do something special. For a description of all the Command cards, see Command Card rule section.

Each battle die has six blank indented sides that will require stickers. Each die should have the following stickers placed on its indented faces: two Infantry symbols, one Cavalry symbol, one Artillery symbol, one Flag symbol, and one Saber symbol.

Note: Not all nations had the same organization therefore the number of blocks for a specific unit type may differ.

Each unit is composed of a certain number of blocks. The number of blocks in a unit may vary by unit type and Nation and is detailed on the National Unit Reference Card.
A General, Marshal or Field officer of any rank (hereafter referred to as a leader) is represented by one rectangular block. A single Leader block is not considered a unit.

Infantry in Square Track and Counters

The two infantry in square tracks and the numbered counters are used to track infantry units that have formed square on the battlefield.
These 18 Victory Banner counters will track a player’s quest for victory.

These 18 Victory Banner counters will track a player’s quest for victory. 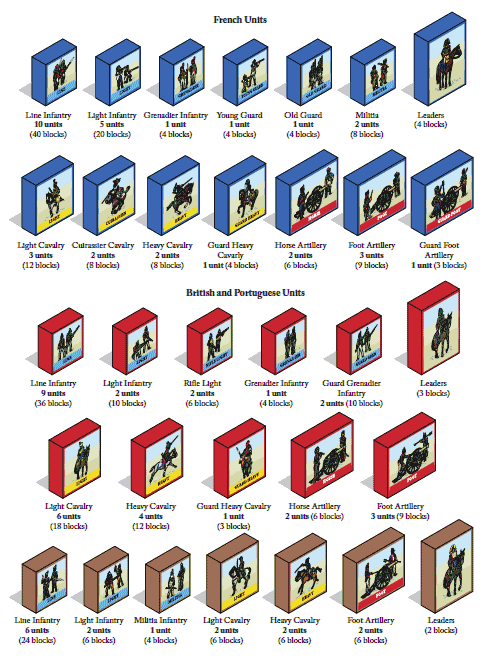 In war, as in politics, no evil - even if it is permissible under the rules - is excusable unless it is absolutely necessary. Everything beyond that is a crime.~Napoleon