Historical Background
The Allied battle plan envisioned crushing the French right flank and then rolling up the French line. Around 8:00 AM on December 2, the first Allied columns began hitting the French right near the villages of Telnitz, Sokolnitz and the castle. Taking the villages, they threw the French back across Goldbach Stream. The French, led by Davout’s corps, counterattacked successfully. The Allies drew off most of their strength in the center to regain the initiative, and fighting around Sokolnitz raged throughout the day.
Believing that the Allied center had been sufficiently weakened, Napoleon ordered Soult forward. Advancing through the morning fog, General Louis de Saint-Hilaire’s division attacked up the heights and was thrown back after bitter fighting. Charging again, they managed to capture the heights. To their north, the Allies struck Vandamme’s position with the Russian Imperial Guards cavalry and infantry. Storming forward, they had some success before Napoleon committed his own heavy Guards cavalry to the fray, forcing the Russians to retreat. At the northern end of the battlefield, Prince Liechtenstein led Allied cavalry against Kellermann’s light cavalry who fell back behind Lannes’ infantry.
Lannes then moved forward against Prince Pyotr Bagration’s Russian infantry. Engaging in a hard fight, Lannes forced the Russians to retreat from the battlefield. To complete the victory, Napoleon turned south in a two-pronged attack, enveloping the Allied position. The Allied left collapsed. Those formations that did not surrender dissolved as the survivors fled en masse.
The stage is set. The battle lines are drawn and you are in command. Can you change history? 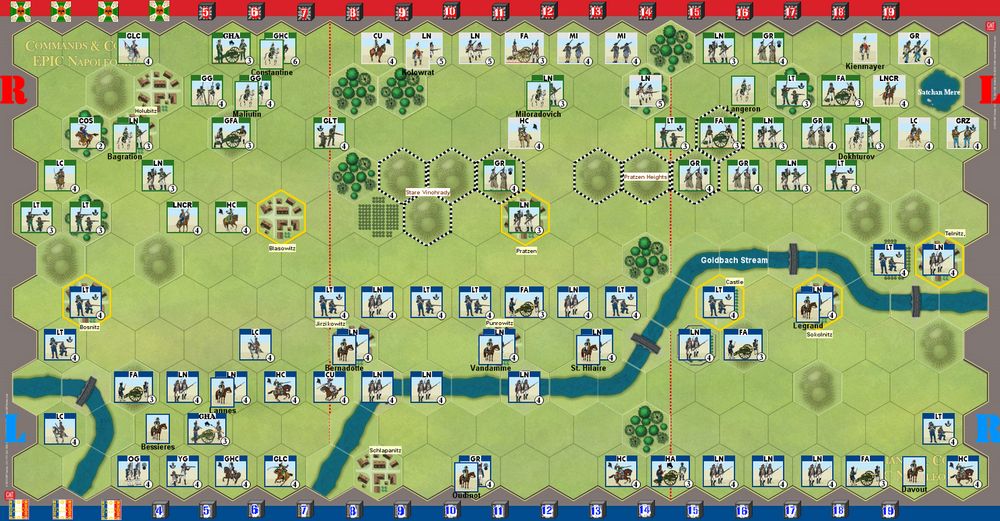 I"The 4 hexes that make up Stare Vinohrady (old vineyards) form a Temporary Majority Group Victory Banner worth 2 banners for the side that occupies an absolute majority at the start of its turn. The Allies start with 2 Victory Banners.".
There are only 3 hill hexes in the setup of the scenario booklet?

Orolando replied the topic: #7531 1 year 2 weeks ago
Won as coalition, 19-10. Almost all the action was in the center. La Grande Manouvre to get Austrian and Russian troops into positions around the vineyard and heights, French assault doomed from the beginning. By the time they pried Pratzen from the Coalition, their center had lost almost everything. Small scale skirmishing on both flanks continued until I inched to 19 banners.
Ernst replied the topic: #6688 2 years 1 month ago
I lost against the French. My opponent could play Forced March twice in a row on the centre were he still had 13 infantry units. It did hurt..

sharpe1812 replied the topic: #4913 5 years 2 months ago
Did win against a newbie as the Coalition 19-10. Do you think getting to play 4 force march for my left flank made any difference?

sharpe1812 replied the topic: #4908 5 years 2 months ago
Note: I have played this scenario 4 times with rules for 2 players. Each time the French won.

Fortesque replied the topic: #4653 5 years 7 months ago
Played two games back to back with a group of myself and three new players. France won 19 - 8 in the first game and 19 - 15 in the second one. This is definitely an even battle, though.
steelcamp replied the topic: #4425 5 years 9 months ago
Played the scenario a week ago and the French won 19-17. The Russian Lancers almost won it single handed. They scattered a Light infantry unit by breaking a square and a light cavalry unit, then mauled an artillery unit, the commander on that flank was rash in her attacks but also very lucky. It was the other two commanders who let her down unable to hold the heights in the center giving the French the flags needed to win.

Nezran replied the topic: #3843 6 years 2 months ago
On the map there are 8 French Generals while on the list of units it shows only 7
Read More...