Historical Background
The Allies were intent on capturing Paris, but after Blücher’s unsuccessful attack in February, choose to retire as Napoleon rushed to the aid of his two Marshals covering the city. Falling back to Laon, a natural defensive position and an important road junction, Blücher deployed his 90,000 man army and waited.
Napoleon ordered Ney and Mortier to attack the towns of Ardon and Semilly on March 9th. Blücher choose to hold back his reserves, when he saw the relatively small number of French troops marching to the attack, believing that Napoleon must be trying to turn his flank. Napoleon, however, had actually committed almost his entire force in the series of frontal assaults.
The fighting on this front this day would end in a stalemate. On the French right, Marmont had better success and had captured Athies, but had bivouacked for the night to wait for the morning to resume the attack.
During the early evening, Blücher’s reconnaissance revealed that the French right flank was exposed. He ordered Yorck and Kleist to attack Marmont’s exposed position. The French were caught off guard and were driven back, but a determined defense of the Festieux Gap allowed his battered corps to escape. The opportunity to destroy Napoleon’s troops the next day slipped away when Blücher took ill and command passed on to the conservative leader General Gneisenau who worried that Napoleon’s demonstrations on the 10th still meant that Napoleon had something up his sleeve. He called off what would have surely been the attack to end the French army. This gave Napoleon and what still remained of the French army the opportunity to slowly withdraw.
The stage is set. The battle lines are drawn and you are in command. Can you change history? 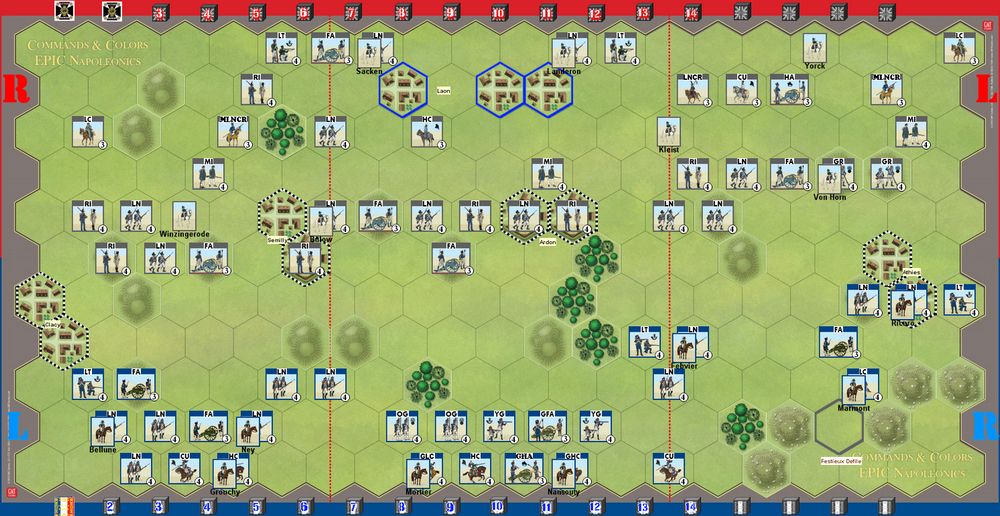 The setup shows 7 prussian leaders, but we only have 6.
5 in Prussian expansion and 1 in the Epic Expansion. Is it a mistake in the scenario setup or is a Leader missing in any game box?

GG replied the topic: #7575 5 months 1 week ago
Huge Prussian victory 14-4 - This scenario can be very surprising!
Seabadger replied the topic: #7192 1 year 21 hours ago
Close Prussian victory 14-12 - the French attacked both flanks and avoided the strong defensive Prussian Centre but the French cavalry took a lot of losses against Prussian squares who were hard to break due to good roles and the use of Iron Will tokens

proyce replied the topic: #6248 2 years 3 months ago
French won the second game 14-5. French dice were very good. Prussian dice were the worst I have ever seen, and I've played more than 400 games of CCN. It was unbelievable.

Mark-McG replied the topic: #4763 4 years 11 months ago
Narrow Prussian victory 14-13 won primarily by Iron Will. Prussians have the numbers, but the French have the quality.
Guard Bayonet Charges are NASTY.

GG replied the topic: #4599 5 years 1 month ago
OK while I'm writing, the battle is still 100% French balanced but for info the Allied lost 13 to 14 in our session! So I suppose this scenario is not such unbalanced. The futur will tell us!
Read More...

How many things apparently impossible have nevertheless been performed by resolute men who had no alternative but death.~Napoleon