Historical Background
Napoleon had chosen Leipzig as his central position to defeat the widely separated Allied armies as they advanced to give battle.
Early on the 16th, Napoleon ordered Marmont’s Corps to join him, but Blücher, Napoleon’s implacable enemy, had advanced from the north more quickly than anticipated, and Blücher’s advanced guard required Marmont to turn back to face the approaching Prussians and Russians. With the French drawn up between Möckern and Podelwitz, Blücher went on the offensive.
Langeron’s Russians moved forward on Gross and Klein Wiederitzsch, while Yorck and the Prussians advanced on Möckern.
The Russians outnumbered the Poles, but many of the Poles were veterans of years of combat in Spain and fought fiercely from within the villages. The Russians advance was held off twice.
Langeron, hoping for a breakthrough, ordered his Russian cavalry to charge, but a counter charge by the Polish and French cavalry threw the Russian cavalry back. One final massive Russian push finally forced the Poles to abandon the villages. While at Möckern, the village changed hands a number of times through the day’s fighting. Finally, with all the Prussian reserves committed, Yorck ordered his cavalry to charge Möckern. The bold move swept away the remaining French in the village, but the exhausted Prussian cavalry was unable to pursue what was left of the French forces as they fell back.
The stage is set. The battle lines are drawn and you are in command. Can you change history? 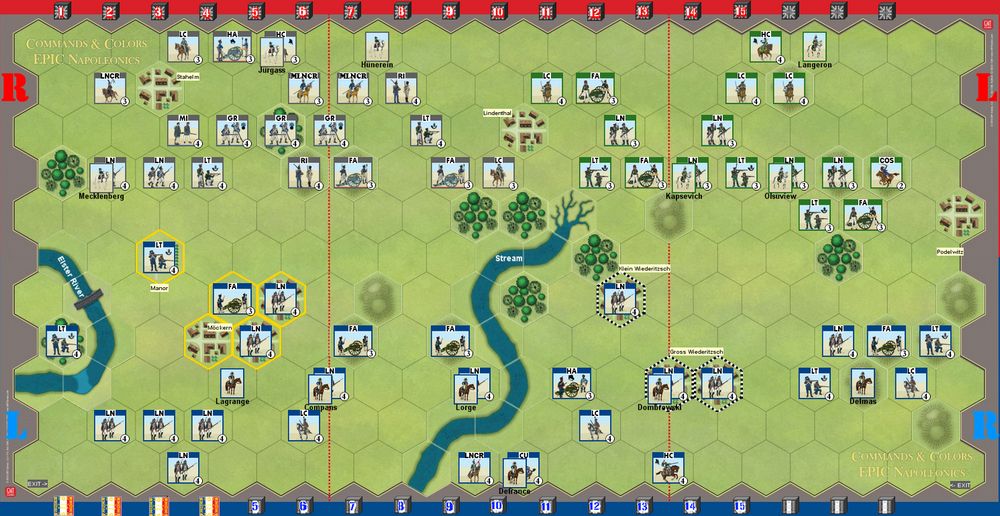 Special Rules
• The Allies gain 1 Temporary Victory Banner at the start of the turn for occupying each town Gross and Klein Wiederitzsch. The French gain 1 Temporary Victory Banner when no Allied units occupy Gross or Klein Wiederitzsch. The French start with 2 Victory Banners.
• The Allies gain 1 Permanent Breakthrough Victory Banner for every unit, excluding Cossacks, that exit the battlefield from any hex on the French baseline.
• The three town hexes of Möckern, the Tower and Manor form a Temporary Majority Group Victory Banner worth 3 Temporary Banners for the Prussians and 2 Temporary Banners for the French. The French start with 2 Victory Banners.
• The Elster River is impassable except at the ford and bridge.
• The Stream has no battle restrictions, but stops movement and will break a cavalry charge. This means cavalry ordered by a Charge Command card will not gain additional die listed on the Charge card, if cavalry unit moves onto, starts on or is on a breakthrough through the stream.
• Pre-Battle Mother Russia Roll is in effect. Saber rolls have no effect.

interesting scenario, one that seems to be difficult to solve for the Allies. In this match the Russians were determined not to attack, and let the Prussians do the attacking. SO whilst the Prussians did take the Möckern walled farm reasonably quickly, they got held up here.

Meanwhile the French launched a series of assaults on the Russian lines, and the vast majority of the combat and losses took place on the French Right. Overall the Russians did pretty well, taking 8-9 French banners, and pushing into Klein Wiederitzsch and 1 hex of Grosser Wiederitzsch town, but here they were forced out by the French cavalry with bombarding artillery firing combined arms. End of the game, this flank was nearly empty, maybe 4 French and fewer Russians (2 poised to exit).

The centre was almost static, aside from artillery fire, virtually nothing was done, which isn't too surprising given the hard fighting on the Left & Right.

The Allies peaked at 13 medals vs 10, but the French took back the Wiederitzsch towns, reducing the Allies score to 11 (and gained a French banner), and destroyed 4 more units. Prussians lost 2-3 units and a leader.

looking at the results of the 2 normal scenarios, the Prussians are about 50/50, whilst the Russians are about 20%, so I have to figure the problem in the Russians, and even knowing they are weak, hard to prevent the French from attacking them. The terrain here favours the French, and the Centre is hard to move forwards for both sides.

RiverWanderer replied the topic: #6005 2 years 8 months ago
Thank you Mark... the one place I didn't look!

Mark-McG replied the topic: #6004 2 years 8 months ago
so looking at the FAQ response on the Mockern Right scenario
www.commandsandcolors.net/napoleonics/ma...16-october-1813.html

the French start with 1 Victory Banner

the Allies get 1 Victory Banner PER HEX, up to 3 Victory banners

I'm presuming the rule should be equivalent.


I suppose this means that the French start with 1 victory banner.

Even so, I don't quite follow the Allies condition.
Does it mean that the Allies potentially gain 1 Temporary Victory Banner at the start of the turn for occupying Klein Wiederitzsch and at least 1 hex of Gross Wiederitzsch, or does it mean something else ?

why do the French get 2 Victory Banners for this rule?

Once French managed to win quite easily 15-6.
Second game was quite tougher and despite Allied forces did their best, they lost 15-13. But if French player would not win in his turn, the very next turn 2 or 3 Russian units would escape the battlefield and securing 2 needed flags. I also think Allies could have won, if they would not forgot about possibility to escape through French baseline..

In war, as in politics, no evil - even if it is permissible under the rules - is excusable unless it is absolutely necessary. Everything beyond that is a crime.~Napoleon