Historical Background
Napoleon’s 30,000 men were tired and hungry after their defeat at La Rothiere, but Blucher believing the French force to be spent, did not make any attempt to unite his army. On February 10th, Napoleon turned and moved on Olsufiev’s 5,000 isolated Russians. Lacking cavalry, Olsufiev decided to stand and fight instead of trying to run and rejoin the main army. It was a fatal decision.
Marmont’s French infantry slowly advanced forward, while the cavalry sent the Russians into squares that were pounded by the French artillery. After suffering heavy losses, Olsufiev and many of his survivors were taken prisoner. Only a few Russians made good their escape.
The stage is set. The battle lines are drawn and you are in command. Can you change history?

Special Rules
• French line infantry are conscripts and do not receive one additional die in melee when attacking an enemy infantry unit.

LARS replied the topic: #7093 1 year 10 months ago
Agree with comments re: exit Victory Banners for the Russians in this scenario. It is an ok scenario as a replay of the historical debacle that the battle was for Olsufiev. After all, he was soundly trounced.

LARS replied the topic: #7092 1 year 10 months ago
Olsufiev humbly presented Marmont with his sword after his line quickly crumbled. French win 5-1. Block count a surprising 18-6. (Excellent French card draws). This scenario appears to be one sided.

RiverWanderer replied the topic: #6487 2 years 8 months ago
Ref the game above... the Russians bought time by withdrawing from the French's strongest section. A good early Rally recovered their infantry from initial French ranged fire and return fire gave them a temporary advantage in the centre. The French switched attack to the other flank, looking to take out the Russian artillery. Unluckily for the French side, an exchange of First Strikes went against them. The French left then seemed stuck for the rest of the game, eventually costing a banner. The game then played out in the centre.

Two First Strikes and two generals falling to double XSWs, one French, made this a quick game even for a five banner scenario, 7 turns each. The opportunity for the French to regain the initiative after their cavalry attack failed was limited by cards and the demands of "fire fighting" whilst their right flank was distant from the fighting. The last French move shows that the French player was keen to get his right into action and regain the initiative. This was late but yet, a turn too early. Instead, the player could have taken his vulnerable 2 block infantry unit to safety. Easy to miss in the heat of a game but this one action would probably have changed the final score to a 5:4 French win.

No doubt the same Russian strategy would fail in the face of a less cooperative card draw or a couple of die rolls going the wrong way.

Fencer replied the topic: #6486 2 years 8 months ago
It seems that the player for France made serious mistakes. But this does not cancel out the player's brilliant actions for Russia. Congratulations!

Mark-McG replied the topic: #6485 2 years 8 months ago
this must be the sole Russian victory!

well done, but how did the French fail to force the Russians to battle where they chose?

RiverWanderer replied the topic: #6484 2 years 8 months ago
From one of my PBEM games of a while ago...my opponent and I working our way through the Russian expansion at the time.

The Russians avoided the French where they were strongest, especially on the flanks - refusing on the Russian left and using the woods for cover on the right, aided by a First Strike. Both Russian flanks attempting to support probing attacks from the centre. All but one of the Victory Banners on both sides came from battling in the centre. Luck held for the Russians in this game. 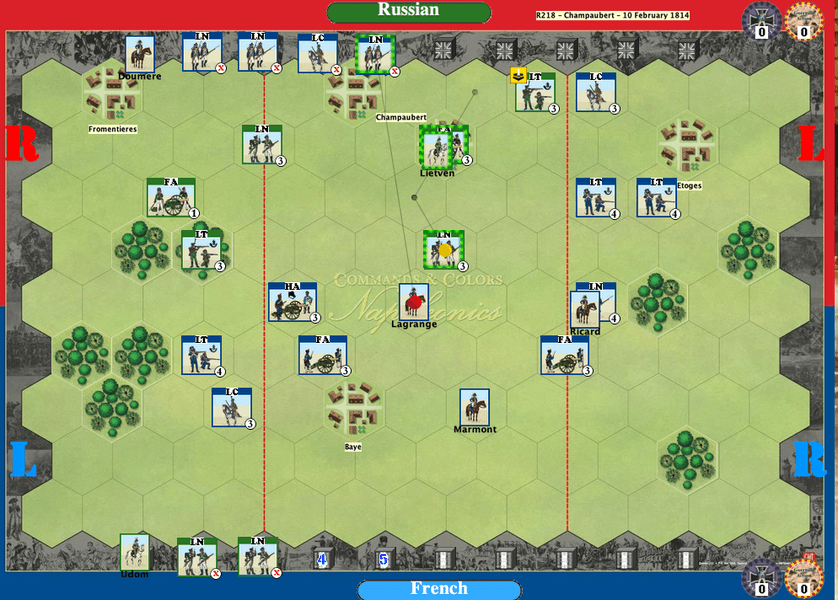 Fencer replied the topic: #6237 3 years 2 days ago
OK, in English. I made a suggestion: give one victory flag for each Russian artillery unit that left the battlefield through the base line. This is true, but I'm not sure if it makes the game more interesting (I'll try). It may be a good idea to give 1 victory flag for every "Scout" order played by the Russians. . This would symbolize the delay of time (it was important for the Russians to wait for night).

Mark-McG replied the topic: #5660 3 years 11 months ago
Fencer, if you can find a way to give the Russians a better chance, I think it is worth it.
Allowing a Mother Russia roll probably isn't enough, but maybe some fieldworks would be some help.

Not sure what you are saying about the guns and Victory banners.

Bayernkini replied the topic: #1129 9 years 8 months ago
Sadly, we have this problem of extrem unbalanced, but historical correct setups, in more scenarios, most in spanish extension.

In most unbalanced scenarios it would be help much, if you change only little things.
1 command card more/less and/or changing the starting player, would already help.

In the Champaubert scenario, a "Exit Victory Banner" would be also an alternate

Mark-McG replied the topic: #1128 9 years 8 months ago
I will nominate this scenario as unwinnable for the Russians. Historically it was a debacle, but not even a close contest here. Russians get 1 Victory Banner if lucky. One scenario where I think an Exit Victory condition might have merit.
Read More...

Soldiers generally win battles; generals get credit for them. ~Napoleon