Historical Background
The dream is over. Napoleon has abdicated for a second and final time. Davout commands the French Army. All that is left is to defend Paris and negotiate terms.
The Prussians have taken the French by surprise by approaching Paris from the south, where it is less well fortified. The Prussian advance puts them temporarily out of communication with the British. The French hold the central position between them, but are too weak to exploit this. Instead, Davout must pursue the Prussians. The Prussians suffer a minor reverse and there is hard fighting but now Ziethen's I Corps attacks towards Issy.
By the end of the day, the Prussians have taken the towns of Issy and Vanves and the French fall back towards Paris. Reinforcements are on their way for both armies; the end is inevitable but Davout has a negotiating position to consider and orders Vandamme forward for one last counter-attack in the early morning.
The stage is set. The battle lines are drawn and you are in command. Can you change history? 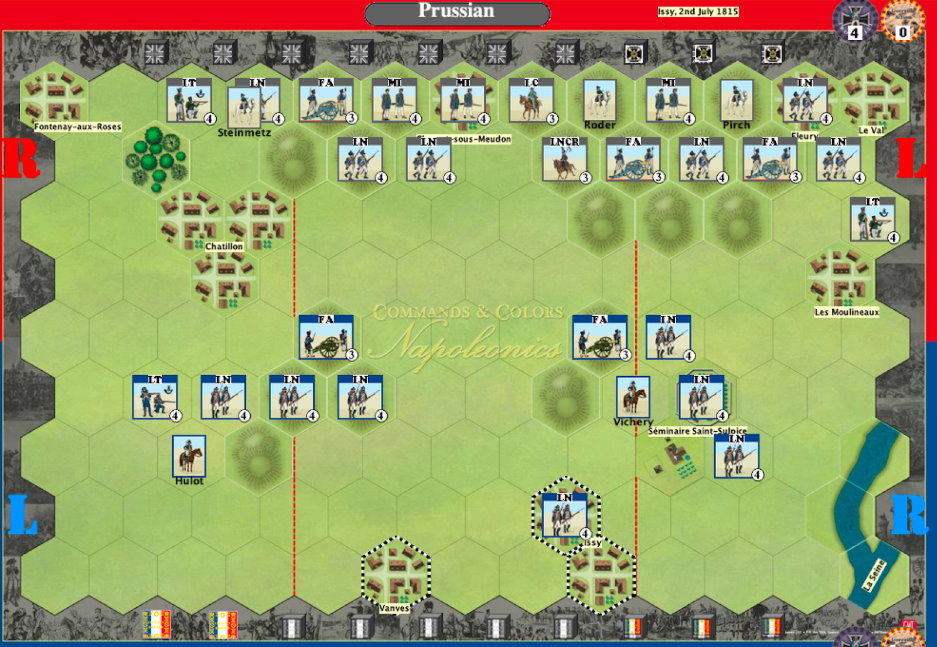 • The 3 town hexes of Vanves and Issy form a Temporary Majority Victory Banner Objective worth 2 French Victory Banners when the French occupy the absolute majority of these hexes at the start of the turn.

• The Prussian player gains 1 Temporary Victory Banner at the start of the turn for each Vanves and Issy town hex a Prussian unit occupies.

GG replied the topic: #6483 2 years 6 months ago
Funny that I worked few years in Vanves in the American society "PANAVISION".
Today the whole map would be covered with town hexes for sure: Close suburds of Paris!
Read More...

It depends on the general alone to conquer difficulties by superior talent and resolution.~Maxims LXVI