Historical Background
Napoleon retained his strategic brilliance, placing his army squarely between the Prussian and Anglo-Allied armies on June 16th. His tactical genius was fading. He allowed an entire corps to countermarch aimlessly on the 16th, deny him the opportunity for a decisive victory either at Ligny or Quatre Bras. Instead, at the end of the day the beaten Prussians escaped at Ligny and Wellington still held the crossroads at Quatre Bras. On the 17th Napoleon turned his main strength towards the British, after detaching Grouchy with two corps to pursue the retreating Prussians and prevent them from uniting with Wellington. A massive storm drenched the area on the 17th as Napoleon advanced upon the Anglo-Allied army that was deploying for battle in front of Mount Saint Jean. The 18th dawned clear, but the rain-soaked ground still made maneuvering cavalry and artillery difficult, so Napoleon delayed the start of the battle, waiting for the ground to dry. Wellington fielded an Anglo-Allied army of 50,000 infantry, 11,000 cavalry and 150 guns. In front of his line, there were three strong positions; the château of Hougoumont, the hamlet of Papelotte and the farmhouse and orchards of La Haye Sainte. Many of his veteran regiments from Spain had been sent to Canada and the United States to fight the Americans. Napoleon’s army consisted of 48,000 infantry, 14,000 cavalry and 250 guns. Many of these troops were veterans of at least one campaign. It was about 11AM before Napoleon gave battle with artillery salvoes and ordered the initial assault against Hougoumont. The battle of Waterloo is well documented, and rather than skim through the account, it is recommended that players take advantage of the numerous sources available and enjoy reading about this epic struggle between two of the greatest commanders in history.
The stage is set. The battle lines are drawn and you are in command. Can you change history? 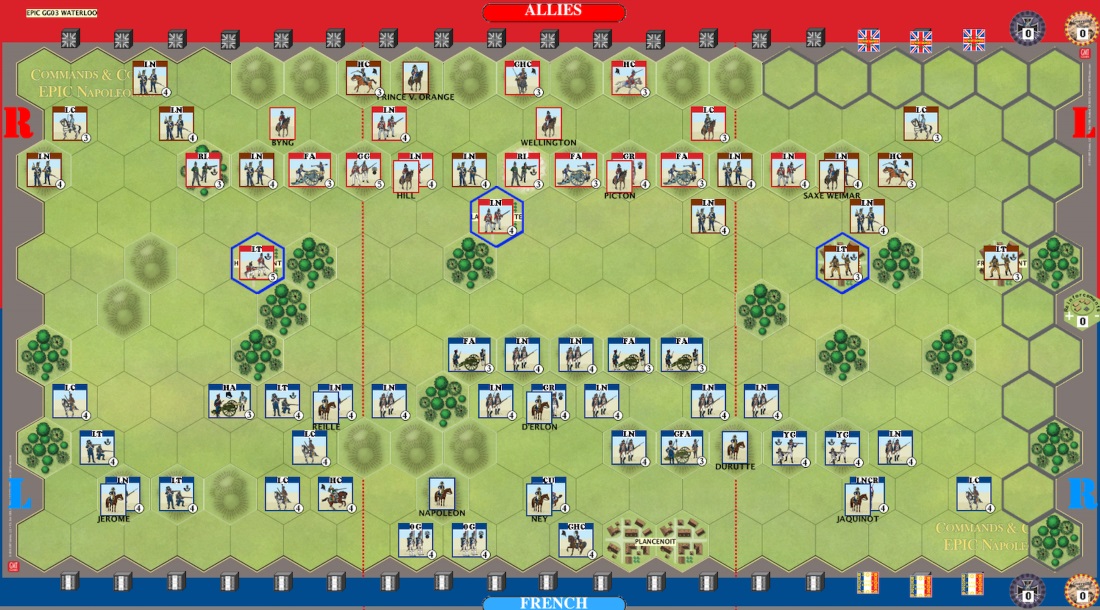 Allied Army *
Commander: Wellington
5 Command Cards then 6 after the 1st arrival of the Prussians (draw 2).
3 Tactician Cards then draw one more after each arrival of the Prussians.
* The brown units represent the Nassau, Brunswick, Hanover and Dutch units. Use the brown blocks and apply all Portuguese rules for those Allied troops with one exception: The brown LN retreats 2 hexes for each flag.

• Hougoumont, La Haye Sainte and Papelotte (with blue border) are each one Temporary Victory Banners Turn Start for the French player.
• Prussian Reinforcements: The Allies player rolls 1 dice at start of each of his turn. If no FLAG symbol, the timeline for the Prussian arrival increases by 1. When the timeline reach 7 and 9, the Prussian reinforcements arrives.
At 7 the Prussians consists of: 3x LN, 2x LT, 2x LC, 1x LNCR plus 2 Leaders (Blücher + Bülow) attached and 2 Iron Will Markers.
At 9 the Prussians consists of: 3x RI, 1x GR, 1x HC, 1x HA plus 1 Leader (Ziethen) attached and 1 Iron Will Marker. The Allies player must setup the Prussians units in any of the grey marked hexes. If not enough room or by choice, the extra units are lost. The Prussians can then be ordered immediately using command cards.

GG replied the topic: #7188 4 days 13 hours ago
Hello R4mello, TY for playing my scenario!
Yes those were old comments. You know we need sometime many testing sessions before being sure of any balance.
So the scenario is now the most balanced I could do, even if we all think it's unbalanced when we loose on any side (including me) lol!
Enjoy! GG - City of Tours - France
R4mello10 replied the topic: #7187 4 days 15 hours ago
Ok thank you! I asked because in one of the comments from the scenario’s designer was actually written that all Prussians should have come in after 9 rounds..probably it was just an older version which has been adapted after some play testing..

GG replied the topic: #6578 8 months 3 weeks ago
TY Ramy for the word! Look the stats: The French side has all his chances

RamyRock replied the topic: #6524 9 months 1 week ago
15 British banners vs 8 French Banners (1 for the temporary banner from Papelotte. My first impression is that the Prussians arrive too early. In any case it is a great map, thanks for your work!

GG replied the topic: #5881 1 year 10 months ago
TY for the report > Check if you are playing the very last rules of this scenario (as posted on the bottom page 2 of this thread)!
GG

Hawkmoon replied the topic: #5880 1 year 10 months ago
Hi GG, We've been playing the return of our April Games Festival, Guillaume "Borodino's Butcher" Ambroise as the Allied against I.
Despite the powerful arrival of Blücher and his Prussians, the French retreated on their right side (having occuped Papelotte only one turn with a weakened Young Guard unit and having Jaquinot killed by devastating Fire & Hold) with order and resisted to let the central part of their Army occupy La Haye Sainte and "clean" the battlefield specially with the Heavy Guard Cavalry very lucky when in charge.
On the left flank, Hougoumont was occupied a few turns by a Light Infantry unit which was destroyed by the Guard Grenadiers who made a great job.
French Old Guard and Napoleon have waited all the game for the final decision but it wasn't necessary...
To end my words, I would say that it is very important to join Art units to make Grand Battery to increase Artillery Firepower (especially when you pick up 2 Bombard cards !!!)
The score was 15/11 for the French side.
Vive l'Empereur !

GG replied the topic: #5862 1 year 10 months ago
TYVM for this very useful report!
So I don’t touch anymore the special rules (Just check you are playing the very last ones).
And try out my Epic Berezina & Leipzig: I love them - GG

proyce replied the topic: #5861 1 year 10 months ago
Hi again GG. Both times I have played this scenario the French have been looking like winners, but had to push hard to get more banners before the Prussians arrive. First time the Prussians did not arrive until turn 13, but it was enough for the Allies to win 15-14. Second time Prussians arrived turn 10 and the Allies won 15-11, although the British had some very strong dice rolls in the center that crushed a French charge (French had 3 Bayonet Charges in the space of 5 turns).
These results seem historically accurate and both games could have gone either way.

GG replied the topic: #5860 1 year 10 months ago
FAQ for this scenario (GG03):
When the Prussians arrive, the first hex where they are placed is NOT part of their movement (surprise for the French). So for example: A Prussian Line Infantry that is immediately ordered while not moving will fight in melee with +1 die (Prussian Nation). A Horse Artillery can shoot 3211 if don't move or 321 if move 1 etc.

GG replied the topic: #5859 1 year 10 months ago
By the way guys: If you want to play those scenarios (or any other) on VASSAL with me: Here is my mail > This email address is being protected from spambots. You need JavaScript enabled to view it.

I keep on checking if there is not a little French tendency. I would like it to be 50/50 or slightly toward the allies (55 to 60 odds) and not French side for historical reason. I want the opposite for my Austerlitz or any other French historical victory scenario. The point is I want the non-historical victories to be slightly underdog for to better appreciate them!

Don't hesitate to try out my other scenarios.
GG

Hamilton replied the topic: #5856 1 year 10 months ago
I submitted the previous too soon

I wanted to add what a great time we had, fantastic job GG! I don't need an 'official' Epic Waterloo in Exp 7, this gets the job done.

Hamilton replied the topic: #5855 1 year 10 months ago
Played two player last night. The game went heavily in the Brit's favor at first, but the French managed to pull out a 15-12 win in the end. The Prussians did not show up (count was at 7 with only one flag rolled, so 8 game turns).

GG replied the topic: #5851 1 year 10 months ago
TYVM Proyce for the kind words and the report!
If you play it some day again: Always check if the notes didn't change.
Best regard General - GG

proyce replied the topic: #5850 1 year 10 months ago
Played today. Great game! I think you have the balance just right. Allies won15-11 but they had great dice. Wiped out 2 French arty and 1 French line on 1 turn with ranged fire. Still close towards the end, but the arrival of the Prussians on turn 10 clinched the game for the Allies.

GG replied the topic: #5811 1 year 11 months ago
TY very much Stanislav!
I'm also exchanging ideas on the Facebook CCN page and for sure BGG!
TY also for the report (keep on because it helps me find out if the scenario is balanced the historical way. I'll keep on surveying if not a little too much "French oriented".
I made 5 scenarios overall that you can find on ccn.net
GG01 Austerlitz basic board
GG02 Waterloo basic board
GG03 Waterloo epic board
GG04 Berezina epic board
GG05 Leipzig epic board
So if you want to test some online with some day just private message me.
GG

Stanislav27 replied the topic: #5810 1 year 11 months ago
Absolutely amazing scenario. Really good job, Guillaume! We played it in 2v2 format and it was an epic expeirence that inclduded action across the entire battlefield. Your way of incorporating the Prussians in a straightforward and intuitive way deserves a lot of praise.

French won 15 to 14. But that really doesn't do justice to the full experience. Full report + pictures here:

GG replied the topic: #5784 2 years 2 weeks ago
TY for the report and to appreciate!
The main difficulty when creating scenarios is that we cannot judge their balance until many tries! I mean you can try a new scenario and have the 3 first wins for the same side - let's say the Allies - Then you are tempted to change the special rules but if you try again without changing them you can have some surprises like 3 victories for the French making it a 50/50 balanced one!
The point is to experiment a minimum of 10 battles after EACH rule change and resist the temptation to change the rules after each battle!
Avec mes respects Monsieur le Marechal d'Empire!

Hawkmoon replied the topic: #5780 2 years 2 weeks ago
Great battle ! 15/8 for the Allies ! Blücher and his Cavalry charged for victory arriving turn 10...

GG replied the topic: #5771 2 years 3 weeks ago
TY very much for appreciating!

Warning: I'm currently making the last adjustments on this scenario and the very last are from today (GG03 updated here).
Check those extracts:

Allied Army *
Commander: Wellington
5 Command Cards then 6 after the arrival of the Prussians (draw 2).
3 Tactician Cards then draw one more after the arrival of the Prussians.
* The brown units represent the Nassau, Brunswick, Hanover and Dutch units. Use the brown blocks and apply all Portuguese rules for those Allied troops with one exception: The brown LN retreats 2 hexes for each flag.
...
French Army
Commander :Napoleon
6 Command Cards
4 Tactician Cards
Move First
...
• Prussian Reinforcements: The Allies player rolls 1 dice at start of each of his turn. If no FLAG symbol, the timeline for the Prussian arrival increases by 1. When the timeline reach 9: The Prussian reinforcements arrive.
The Prussians are: 3x LN, 2x RI, 2x LT, 1x GR, 2x LC, 1x HC, 1x LNCR, 1x HA plus 3 Leaders (Bülow, Ziethen, Blücher) and 3 Iron Will Markers. The Allies player must setup the Prussians units and Leaders (attached) in any of the grey marked hexes. If not enough room or by choice, the extra units are lost. The Prussians can then be ordered immediately using command cards.

Hawkmoon replied the topic: #5769 2 years 3 weeks ago
This scenario will be played next saturday afternoon (April the 27th) at the "Festival des Jeux de l'Esprit" in Le Mans. Thanks once again Guillaume for your implication !

If they want peace, nations should avoid the pin-pricks that precede cannonshots.~Napoleon