Historical Background
In 1800, First Consul Bonaparte and his ally, the Spanish prime-minister and Generalissimo Manuel de Godoy ultimately demanded Portugal, the last British ally on the continent, to break her alliance with Britain. Portugal refused to cede, and, in April 1801, French troops arrived in the country. They were bolstered by Spanish troops under the command of Manuel de Godoy. The Spanish attack to Portugal started on the early morning of the 20 May, and focused on the Portuguese border region that included the main Garrison Town and Fortifications of Elvas and the smaller fortified towns of Campo Maior. Without having their fortifications complete and defended only by a few hundred soldiers, most of the militias, Olivença and nearby Juromenha quickly surrendered to the Spanish forces. The Portuguese garrison of Campo Maior resisted the assault for 17 days, forcing the Spanish to maintain two entire divisions in its siege. The main Spanish force tried to assault Elvas but was easily repelled by the strong Portuguese garrison. The Spanish troops then withdrew to a safe distance from the fortress, with Godoy not daring to attack it again until the end of the war. The war entered in a stalemate, with most of the Spanish forces hold in sieges of fortresses and the rest not being able to face the blockade made by the main core of the Portuguese Army, in order to advance further inside Portugal. Despite this, Godoy picked oranges from the outside of Elvas and sent them to the Queen of Spain with the message that he would proceed to Lisbon. Thus, the conflict became known as the "War of the Oranges". The stage is set. The battle lines are drawn and you are in command. Can you change history? 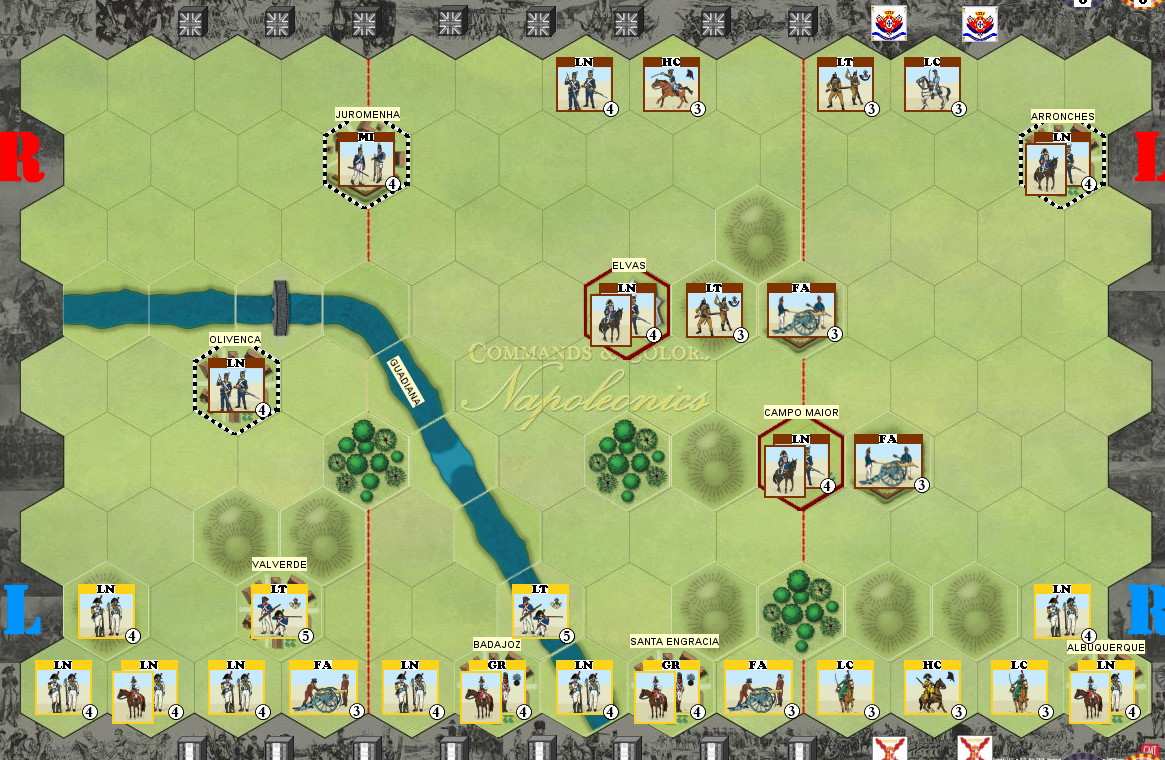 • The 3 Portuguese towns plus the fortress of Elvas and the church of Campo Maior form a Temporary Majority Group worth 1 banner for the side that occupies an absolute majority of those 5 hexes at the start of his turn.

• For each scout card played the Portuguese player may gain 1 Permanent Victory Banner but then will only draw 1 Command Card instead of 2 at the end of his turn.

• For each scout card played the Spanish player may first apply a "Short Supply"  to any Portuguese unit except those in Elvas and Campo Maior but then will only draw 1 Command Card instead of 2 at the end of his turn.

• The Guadiana river is fordable. The ford does not stop movement but battle restrictions still apply.

• The Spanish Guerrilla rule is not in effect.

GG replied the topic: #6074 3 years 1 month ago
I understand too.
For me it's sure that I'm not a wargamer but a boardgamer.
So while I created 6 scenarios and did participate in this last one I must admit that I did never check the scales. As long as the towns and leaders names are truly historic, the type, placement and quantity of units are truly historic and as long as the special rules match with the historic special circumstances: I am happy with it.
Here is the list of my scenarios and I hope their scales are more or less OK. For sure my GG05 Epic Leipzig is a huge scale but I knew it and did add several very special rules to compensate. But I tested them many time to but sur of the most important think in my opinion: THEY ARE BALANCED AND VERY FUNNY TO PLAY! Best regards - GG

Hawkmoon replied the topic: #6073 3 years 1 month ago
Yes, it might be interesting. Remember that Campo Maior has resisted 17 days. When I will get time, I will do it with Guillaume's help. I have another project with the Portuguese attack from Chaves, Trás-os-Montes in northern Portugal to Verín in southern Galiza and the Spanish counterattack.
Maybe two scenarios possible.

I understand your point of view about the scale.

Mark-McG replied the topic: #6072 3 years 1 month ago
I'm very much onboard with points 1 &2, it looks like an interesting adaption of the Napoleonic theme

but I think CCN is tactical in scale, whereas the distance here are operational.

Perhaps a scenario on the two Spanish divisions attacking Campo Maior, stoutly defended by the Portuguese garrison under the command of Lieutenant-Colonel Dias Azevedo, in the same manner as Hougemont and Placenoit was done

GG replied the topic: #6069 3 years 1 month ago
For me I looove this exotic Scenario and play it many times for many reasons:

1) Fun to play those 2 neglected nations
2) Those two nations need patience and finesse to be played
3) I love very much the special rules who stick to history (time on the side of the Portuguese when they do not run away)
4) Because of the close range and the hazardous starts: The battles are going really different each time
5) Because Because (as use to say my daughter): I love it because I love it!

Mark-McG replied the topic: #6068 3 years 1 month ago
that's true, but if Elvas is within cannon range of Badajoz, that seems stretching the system a bit far.

Hawkmoon replied the topic: #6067 3 years 1 month ago
Yes, in fact there was a lot of firing actions between the two sides. The book about it doesn't explain a lot the battles. Or I have to try to create a battle for each action, maybe not really interesting. I preferred to create a map for the whole Alentejo campaign.

Bangla replied the topic: #6066 3 years 1 month ago
"Been trying to understand the distances here. Badajoz to Elvas is about 20km (5 hex distance)
so the scale is VERY large".

Mark-McG replied the topic: #6065 3 years 1 month ago
Been trying to understand the distances here. Badajoz to Elvas is about 20km (5 hex distance)
so the scale is VERY large

Hawkmoon replied the topic: #6064 3 years 1 month ago
Hi Mark,
The only units that cannot be short supplied are the ones who are in the castle and in the church. So Portuguese Artillery could be short supplied. The permanent VP is won by Portuguese player on his own turn (not when scout card is been played by Spanish player). The Short Supply rule is here to show the lack of fighting spirit of some Portuguese garrisons (especially Olivença which surrendered without firing at Spanish troops). Campo Maior resisted during a long time and Elvas was well fortified. The Portuguese center is hard to take. Thanks for your interest.

Mark-McG replied the topic: #6063 3 years 1 month ago
• For each scout card played the Spanish player may first apply a "Short Supply" to any Portuguese unit except those in Elvas and Campo Maior but then will only draw 1 Command Card instead of 2 at the end of his turn.

the Foot Artillery in the Fieldworks, can they be Short Supplied?
Would be my first choice in that event

Have to say I don't like this rule much. Spanish have the power to do the job without the need of this assistance

Mark-McG replied the topic: #6062 3 years 1 month ago
The 2nd Special rule reads;
• For each scout card played the Portuguese player may gain 1 Permanent Victory Banner but then will only draw 1 Command Card instead of 2 at the end of his turn.

Does this mean Scout cards played by the Portuguese player (the same as Time Pressure rule), or is it EVERY Scout card, including the Spanish player (i.e. a penalty for the Spanish use of Out of Supply)?

The science of strategy is only to be acquired by experience, and by studying the campaigns of all the great captains.~Maxims LXXVII