Historical Background
1813 was the year the balance of power swung in the Allies’ favor in Spain. Wellington’s army received substantial reinforcements from England. Napoleon drew large numbers of veteran troops from Spain to rebuild after the disastrous 1812 campaign. Wellington’s Allied army advanced through the mountains into the North East of Spain, outflanking the French armies of Joseph Bonaparte and forcing them toward the French border. Joseph, encumbered by a massive baggage train, had fallen back to Vitoria to await General Clausel and reinforcements. Joseph unwisely deployed to the west of Vitoria. The defensive terrain was good, but he had only a single route of retreat through the pass and that massive baggage train was in the way. Army morale was suspect.

Wellington determined to strike at four vulnerable areas in Joseph’s line and destroy the French army before Clausel’s arrival took away his numerical superiority. The first attack was conducted by Major General Hill’s corps and a Spanish Division against the French left flank. Alten’s Light Division was to cross the Zadorra and extend the British line. Two divisions, including Picton’s, were to engage the French right flank, and two more divisions under Graham were to attack across the Zadorra north of Vitoria to block the retreat route.

Hill’s attack slowly pressed the French back, and Kempt’s brigade crossed the unguarded intact bridges on the Zadorra to aid the attack. Picton’s divisions were late joining the fight, but luck was with the British. Hill’s attack attracted virtually all of the French reserves. When Picton’s divisions engaged, they made good progress, and the entire French army was pushed back into an ever-shrinking area. Over seventy guns on each side engaged in the largest artillery duel seen in Spain as the Allied infantry continued to press forward. By 4 P.M. the French were beaten, and Joseph’s order to retreat turned into a full-fledged rout as the troops heard the sound of battle near their escape route through the pass.

The entire French army was saved from destruction by two events. First, terrain and fanatical French resistance prevented Graham from blocking the retreat path. Second, the Allied army dissolved into a horde of looters as they came upon the riches of the baggage train, effectively ending pursuit. As it was, Joseph’s army suffered 8,000 casualties and lost all of its artillery and stores in addition to the baggage train. 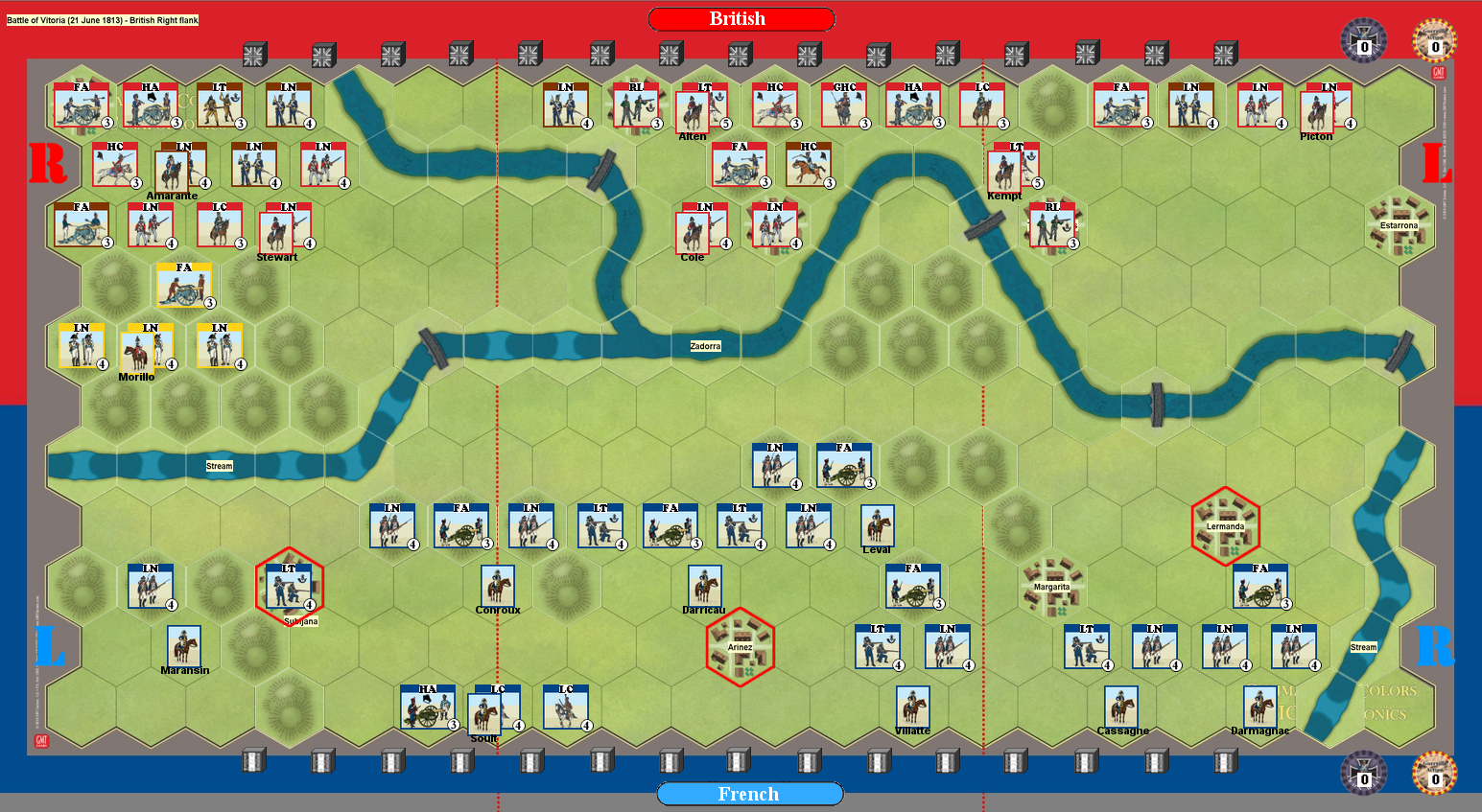 Special Rules
• The Spanish Guerrilla Action rule is not in effect.
• The River Zadorra is not fordable.
• The Streams are fordable
• Subijana, Arinez and Lermanda are each worth 1 Temporary Victory Banner to the British

If I were to change anything in this scenario it would be to make the towns a Turn start Temporary Victory banner rather than immediate.
I found it exceptionally challenging as the Allies, making 6 river crossings. The Short Supply card in French hands is a great advantage for them in this scenario.

There are only two forces in the world, the sword and the spirit. In the long run the sword will always be conquered by the spirit.~Napoleon