The Fortress of Badajoz dominated the southern invasion route from Portugal into Spain. The British had invested the fortress, but had few engineers and no siege train to speak of. The French were not idle. Marshal Soult set out toward Badajoz with a relieving force. Beresford, the temporary army commander, marched a force larger than Soult’s to the small town of Albuera to meet the French. Beresford placed his army on the ridge behind Albuera, expecting to receive a frontal assault to split his army. Soult, however, formed most of his army behind the high ground opposite the Spanish on the right flank.

On the morning of May 16th, General Godinot’s brigade attacked Albuera as a diversion, while Soult’s main force moved unobserved across the Albuera River and delivered a flank attack upon Blake’s Spanish contingent. The first Spanish unit attacked was Zayas’s division, a veteran unit under a good commander. Though pounded by superior French forces, the Spaniards held until Stewart’s British division arrived. Stewart threw Colborne’s British brigade at the French flank and checked French progress, but none of Colborne’ regiments were in square. French cavalry charged and virtually destroyed three of the four regiments. The rest of Stewart’s division went into line behind the embattled Spaniards. The French made a fatal pause to allow a fresh division to come
forward. Zayas’s survivors drew off under no pressure. Now a solid line of British muskets awaited the French columns that had been successful against Zayas. As the fresh French and British formations met, both did fearful execution to each other at close range, British line fire prevailed, causing the battered columns to retreat. French reserves (Werle’s division) advanced toward Stewart’s remnants, but help was coming. Sensing disaster, General Cole advanced his British division without orders. His action won the battle, as British line fire triumphed over the French columns, but again at a high cost in British casualties. Soult could see Harvey’s fresh Portuguese division advancing, and with no more fresh troops available, ordered a French retreat.

Although considered a British victory, when Wellington heard he had lost almost 6,000 irreplaceable British soldiers, he was reported to have said, “Another such battle will ruin us."
The stage is set. The battle lines are drawn and you are in command. Can you change history? 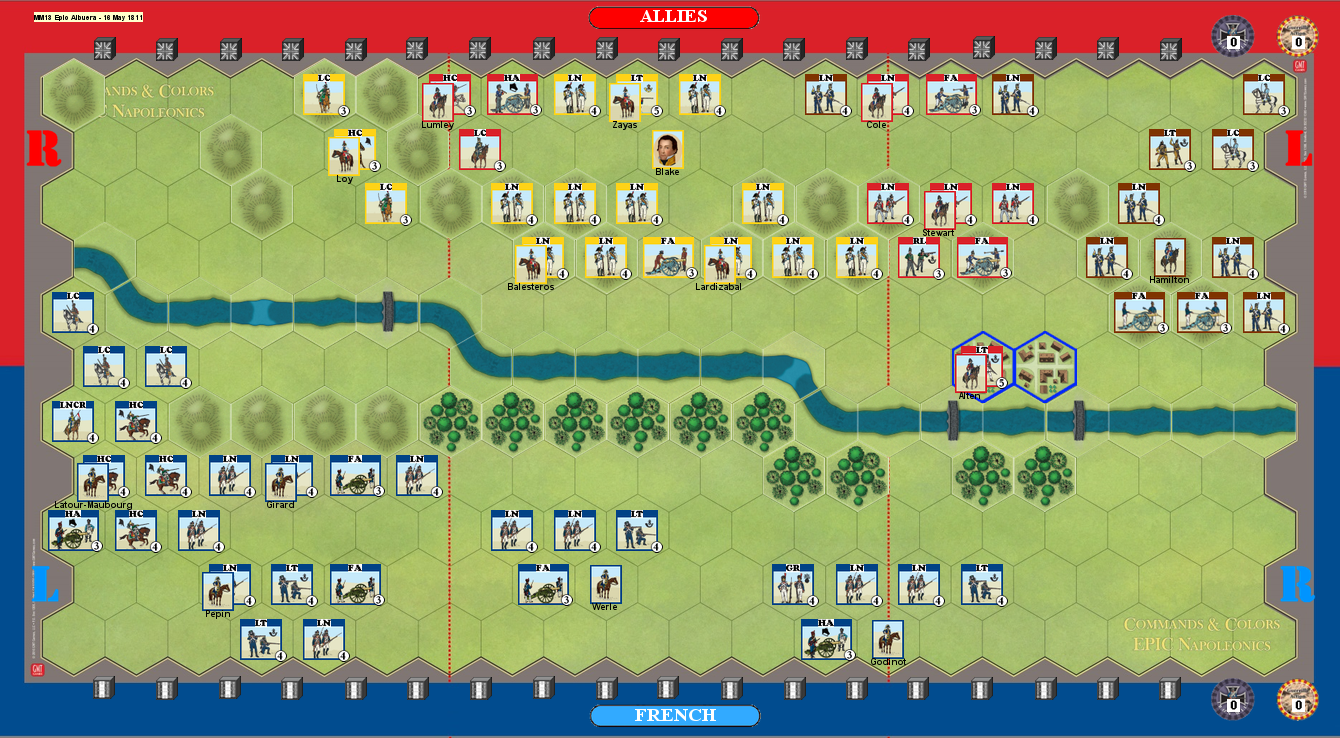 Hawkmoon replied the topic: #7650 4 months 2 weeks ago
So we played it yesterday evening : 18-11 for the French (18-16 using your alternate counting system maybe 17 using time pressure) . Each side was wiped from its right flank very quickly and it made some difficulties to play...
The spanish center wasn't able to resist against the Furia francese. The Allied moved a lot its infantry making a decisive Grand Battery with 2 Portuguese and an English one. 2 allied generals were killed and one french.
Remembering our first game, the score would be at the end at least 18-14 or maybe 18-4 (or maybe a little more) !!! (my Grenadiers made an incursion in Albuera and were wiped out after 2 turns despite a missed Rally roll...).
Very atypical but also interesting to play.

Hawkmoon replied the topic: #7646 4 months 2 weeks ago
We are gonna play tonight the same way as Tuesday evening. Maybe your 2 first proposals will match (we can make a virtual count with them). I think Time pressure not adapted for this kind of map. It is hard to move due to the river and the forest.
I'm gonna tell you tomorrow.

Albuera was a significant defeat for the Allies, where Beresford allowed his position to be outflanked, and his subordinates disobeyed orders and made poor tactical choices.
So I'm happy with the way the scenario matches the historical outcome, but in terms of balance, I think the Victory conditions need to be tilted towards the Allies to give them more chance.

Things I'm considering and would appeciate feedback and advice

Hawkmoon replied the topic: #7637 4 months 2 weeks ago
Played last evening. A huge defeat for the Allied player (18-5). 4 generals killed in action for this side. The return is tomorrow at 20h15 GMT+1 at home.
Very atypical scenario.
Read More...

The torment of precautions often exceeds the dangers to be avoided. It is sometimes better to abandon one's self to destiny.~Napoleon