Historical Background
After the French defeat at Nive, Soult fell back to a position north of the River Gave de Pau. Wellington advanced along both sides of the river, while Soult deployed along a ridge, running roughly parallel to it. The French position was a good one, but too long.
Soult had to place all of his veteran troops in the front lines. He was now committed to a static defense with little besides raw conscripts in reserve.
Wellington’s army was organized into three groups commanded by Beresford, Picton and Hill, with the famed Light Division in reserve. He intended for Beresford to strongly attack the French right while Picton held the rest of the French line in a diversionary attack. Hill’s divisions were to cross the Gave de Pau and fall on the French left to complete the victory.
The battle opened with Beresford’s divisions going in against the church and village of St. Boes. He succeeded in capturing the church, but the advance was checked by Taupin’s troops defending the village. Reille, the French right-wing commander then launched a spirited counterattack that forced Beresford to pull back.
Wellington now displayed his command ability by quickly changing his plan. He converted Picton’s feint into the main attack. Picton’s division, aided by the Light Division, split the French center. At the same time Clinton’s division was pressing the attack on Orthez, and Hill’s two divisions had crossed the stream by means of a ford and were threatening Soult’s left and rear. On the French right, St. Boes fell to renewed assault, and Soult conceded defeat.
The stage is set. The battle lines are drawn and you are in command. Can you change history? 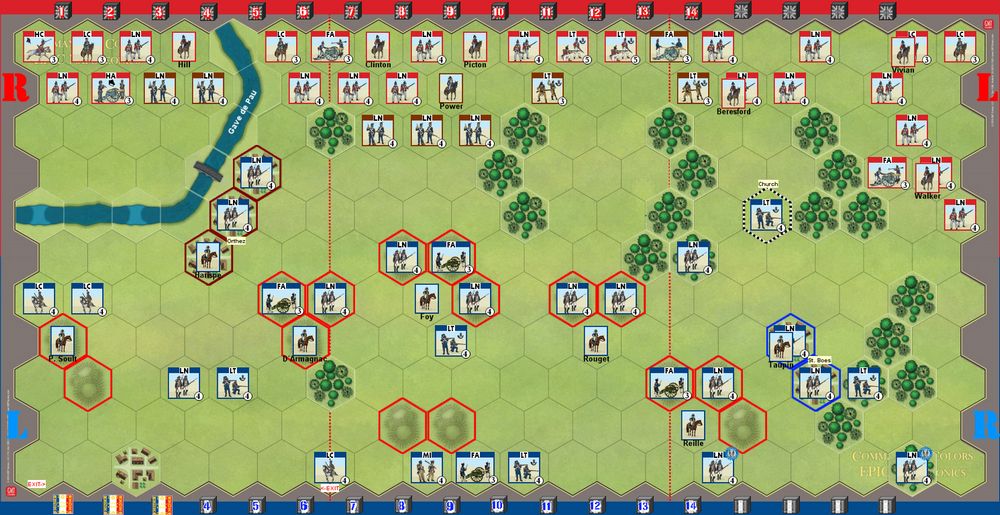 RiverWanderer wrote: The scenario embedded into the Vassal module (as at v2.2) incorrectly gives French the first move. Checked against the published scenario.


Thanks for checking. I think we played with Gileforn this incorrectly. Thanks for catching this error!

RiverWanderer replied the topic: #6466 1 year 8 months ago
The scenario embedded into the Vassal module (as at v2.2) incorrectly gives French the first move. Checked against the published scenario.

Mark-McG replied the topic: #5615 3 years 2 weeks ago
looking at the scenario card.. yes they should be French Line conscripts

RiverWanderer replied the topic: #5614 3 years 2 weeks ago
Militia should be French Line conscripts, according to the official scenario. No?
Read More...

Never leave gaps for the enemy to penetrate, unless it be to draw him into a snare.~Maxim XXXIV