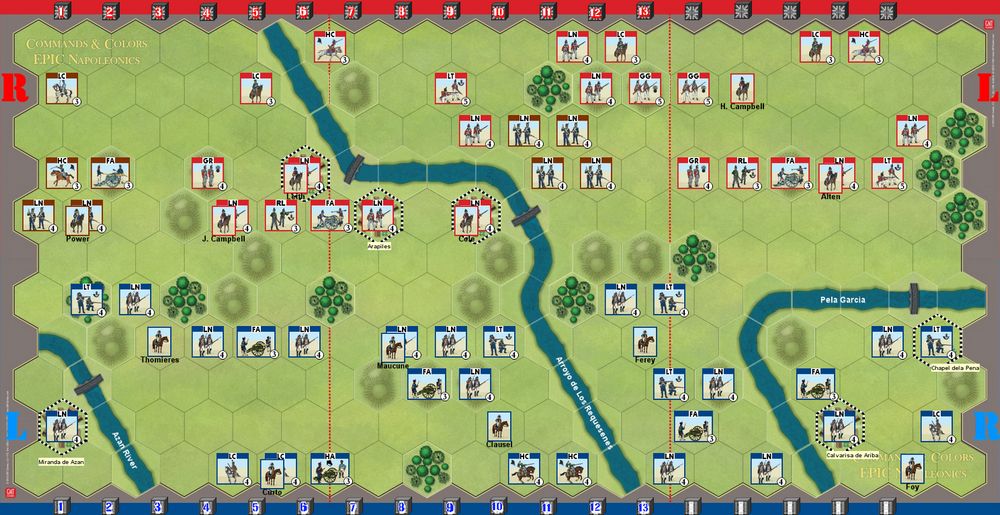 Hexagoon replied the topic: #7288 1 year 7 months ago
Played twice. Both very narrow British victories. The French efforts to win by taking the central town hexes almost paid off, however in both games their casualties were too high. This seems a very balanced scenario and could easily go either way.

RamyRock replied the topic: #6542 2 years 5 months ago
We played it twice. One victory for the French and another victory for the British. Salamanca is one of my favourite epic scenarios so far.

proyce replied the topic: #6230 3 years 1 week ago
Second game after yesterday, with players switching side. 13-8 Allies this time, and it wasn't really even that close. At the end, the French only had 1 unit left in the center and 3 1/2 on their left. French lost 60 blocks, Allies 47.

Mark-McG replied the topic: #5605 4 years 3 weeks ago
French infantry faded back to use their dominant artillery to wear down the Allies. French victory 13-11 in nail biting finish.

Attila replied the topic: #5177 4 years 10 months ago
13 to 9 to the French. Wondered whether British should start first as they were the attacking force. A French bayonet attack card on the first turn on the left flank caused devastation to the British although it was a close finish with many French units down to 1 stand
Read More...

In war, moral factors acount for three quarters of the whole; relative material strength accounts for only one quarter. ~Napoleon