Historical Background
Retreating towards Torres Vedras, the Duke of Wellington’s army of 25,000 British and the same number of Portuguese halted at Bussaco to make a stand along the crest of Bussaco Ridge. As Massena’s army of 65,000 approached the British position, he was uncertain of the exact disposition and strength of the enemy, for Wellington had adopted his favorite tactic of hiding his true strength from the enemy by deploying his forces on the reverse slope of the ridge.
Marshal Andre Massena did not, however, let his uncertainty of the Allied position deter him from attacking. He planned a two-phase attack, first with Reynier’s Corps on what Massena believed was the British right flank, followed by Ney attacking the left after Reynier met with success. Massena, kept Junot’s corps in reserve, to exploit success wherever it happened.
Reynier attacked first, but his disjointed attacks only achieved early success and his troops occupied part of the ridge. These French came under heavy fire, and were thrown back by the shock of a British infantry charge. The fighting in this sector of the battlefield for the most part was at an end. Hearing the heavy gunfire, Ney assumed Reynier’s men were enjoying success and ordered his attack. Ney sent Loison’s and Marchand’s divisions against the British left. As the French neared the British position, Crauford ordered his troops to pour murderous volleys into Loison’s columns. Within minutes, Loison’s Division was streaming back down the hillside in full retreat. Meanwhile Marchand’s Division had advanced to the foot of the ridge, but after several unsuccessful assaults up the hillside, Ney called off Marchand’s attack. Massena accepted the futility of making any further attempts to storm the ridge and withdrew.
The stage is set. The battle lines are drawn and you are in command. Can you change history? 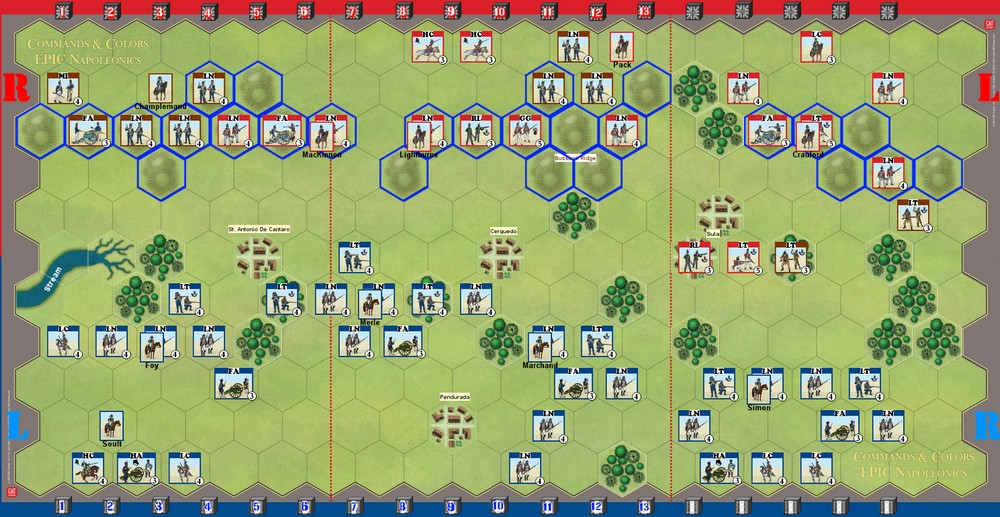 Special Rules
• The French gain 1 Temporary Victory Banner at the start of the turn for each Bussaco Ridge hill hex occupied.
• The stream is fordable.

Mark-McG replied the topic: #6632 2 years 2 months ago
MT20 results
4 French and 3 British wins
seems to slightly favour the French, in that the British wins are usually tight, whereas the French can get a blowout

g1ul10 replied the topic: #5352 4 years 3 months ago
Played yesterday for a final French victory 13 to 6. Marchand managed to take the ridge and keep it. My original plan as the French commander was to attack on the right section but during the game, I realized that probably the weakest spot was in the center section in front of Marchand initial position and I acted consequently.

BTW, do you have log file of our first EPIC?

Mark-McG replied the topic: #4025 5 years 11 months ago
A very close game with a lucky French win as the dice failed the British at the last gasp. Needed 1 INF on 4 dice, but missed out.
13-12 French win, claiming 4 hexes on the Ridge

Bayernkini replied the topic: #4024 5 years 11 months ago
Here is the logfile of our game yesterday/today

You must not fight too often with one enemy, or you will teach him all your art of war.~Napoleon