Historical Background
Four days after Wellesley’s initial clash at Rolica, General Jean-Andoche Junot, with an army of 14,000, attacked the Anglo-Portuguese army of 17,000 troops. Junot wanted to defeat the invaders before reinforcements could arrive by sea. The battle of Vimeiro began with three brigades of French advancing to take Vimeiro hill and the town, while a fourth brigade had swung right to turn the British left flank. Unfortunately for Junot, his frontal attacks were uncoordinated, and failed to pin the British troops in the center. Wellesley was able to redeploy his army to face the threat on his left. The French column attacks in the center were finally forced back by sustained British volleys and soon afterwards the flank attack was also beaten back. Covered by his cavalry, Junot retreated towards Torres Vedras and the British did not pursue.
Following the battle, the British senior commanders Generals Dalrymple and Burrard worked out a deal allowing Junot’s army to leave for France on British ships, taking all their guns and equipment. This deal, not surprisingly, caused a massive outcry in Britain.
The stage is set. The battle lines are drawn and you are in command. Can you change history? 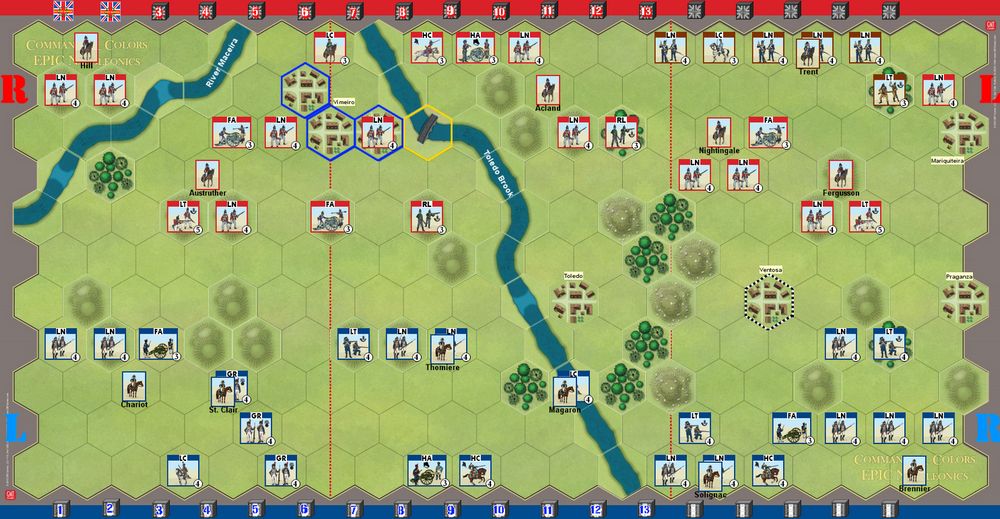 Pevans replied the topic: #6151 2 years 5 months ago
Played this at MidCon last month, losing as the British - I blame my subordinates.

g1ul10 replied the topic: #5309 3 years 10 months ago
Played today for a French victory 13 to 11. Nine units eliminated on each side but the control of two Vimeiro hexes gave the French the victory. It was a one vs. one battle that took a bit more than 2 hours. We really enjoyed it.
steelcamp replied the topic: #4426 5 years 3 months ago
Played this yesterday 3 on 3 the British won 13-10. The French used the grenadiers to great effect driving killing many British and were poised to enter the town of Vimeiro and held Ventosa till the very end when a spirited British attack regained the town. This attack on Ventosa won the game by flipping the score by four points. Also of note two French leaders were killed while leading their units after only suffering light casualties.

Bayernkini replied the topic: #3847 5 years 8 months ago
Played it twice (with Mark) and i think, this one is a good one, to introduce/learn the epic rules.
Comparative less units, and units/rules, which should be known from the basic game.
So you can concentrate you for the epic rules, and it´s still a lot to lookup (most the many combinations/rules with the TC´s).

We played each games in about 3-3,5 hrs, so this is reasonable as a 2-player epic game.
Read More...

An army marches on its stomach.~Napoleon